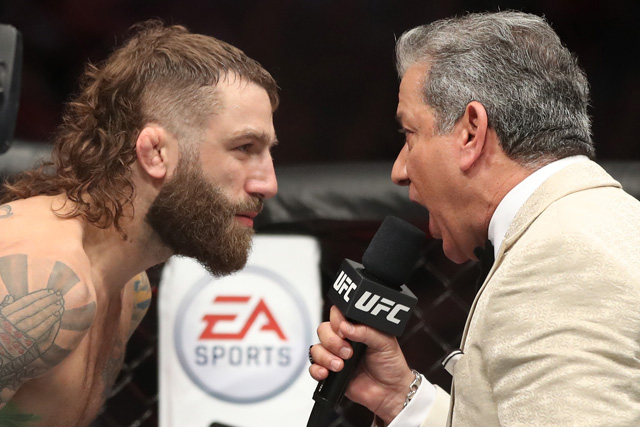 Luck can be a funny thing in the fight game.

On the one hand, being in the right place at the right time can get a fighter much further, much faster, than it can athletes in almost any other professional sport. Examples of this axiom abound, but a short list would include virtual unknown Joe Soto fighting for an Ultimate Fighting Championship title in his debut with the company at UFC 177 after Renan Barao fainted and hit his head while cutting weight, Vitor Belfort going down in history as the fourth UFC light heavyweight champion after the seam of his glove cut Randy Couture’s eye 54 seconds into their title fight at UFC 46 and Matt Hamill beating all-time great Jon Jones via disqualification after “Bones” had a brain malfunction and started throwing illegal elbows.

The other side of that coin is however that being in the wrong place at the wrong time can be calamitous to a fighter’s health and career trajectory. T.J. Grant won a title eliminator bout and was set to fight for the lightweight championship right before suffering a concussion in training that promptly ended his professional career; Chael Sonnen was less than two minutes away from becoming middleweight champion when a momentary lapse of concentration allowed Anderson Silva to cinch up a triangle choke and turn him away; Tony Ferguson’s plight since his debut with the UFC could be a Lifetime movie -- the catalog is endless.

To date, UFC lightweight Michael Chiesa has fallen into this latter category of fighter -- one whom the goddess of Fortuna has not smiled down upon.

His spells of adversity go right back to the first portion of his UFC career. After winning the 15th season of “The Ultimate Fighter” and putting together a 4-1 record with the promotion, Maverick’s momentum was halted after his bout opposite fan-favourite Joe Lauzon was stopped by the doctors due to a cut just as the pendulum was swinging in Chiesa’s favour. After that, he re-established his winning ways with three consecutive victories to earn a shot at shot at No. 3-ranked Ferguson at UFC Fight Night 91, but was forced to withdraw from the bout two weeks out due to a back injury. A year on the shelf later, he returned to competition opposite Kevin Lee in the headliner of UFC Fight Night 112, only to have referee Mario Yamasaki intervene prematurely when the “MoTown Phenom” was sinking in a rear-naked choke.

But the biggest hardship that Chiesa has faced, the hardest pill to swallow, came in April of this year in the build-up to UFC 223 in Brooklyn.

Two days before the Colorado native was set to fight on the event’s main card opposite former titleholder Anthony Pettis, Conor McGregor, flanked by his teammates, assaulted the bus shepherding Chiesa and a number of other fighters from the UFC Media Day at the Barclays Center to their hotel. The maneuver, ostensibly designed to force UFC 223 headliner Khabib Nurmagomedov -- who’d been filmed roughing up McGregor teammate Artem Lobov earlier in the week -- to disembark the bus, left Chiesa with abrasions across his face and forehead after McGregor threw a metal dolly through the bus window, ultimately forcing the New York State Athletic Commission to pull him from the card.

If the story stopped there, it might have been just a footnote in history; the UFC paid Chiesa his show money, and he was re-booked opposite Pettis three months later. But due to a bizarre series of casualties affecting the main event -- Tony Ferguson fell out due to a freak accident, late-replacement Max Holloway was pulled due to complications making weight and Pettis allegedly talked himself out of the shot by asking for a higher purse -- what Chiesa actually missed out on was an 11th-hour shot at the UFC lightweight title.

Now, the 30-year-old is looking to take justice into his own hands, filing a lawsuit against “The Notorious,” his promotional company, McGregor Sports and Entertainment, members of his entourage and the Barclays Center, alleging that Chiesa was “attacked, assaulted and/or battered” by McGregor and that this resulted in “serious personal, economic, and other injury.”

Amongst the causes of action in the suit are negligence, negligent infliction of emotional distress, assault and battery, and the damages he’s seeking -- while unspecified -- are likely in the millions.


For a sport with its fair share of lawsuits, the first thing to note is that it’s exceptionally rare to see a fighter initiating legal proceedings, much less against their fellow combatants. Litigation is expensive, stressful and time consuming, and usually only worth pursuing if the person on the other side of the aisle has deep pockets, which most MMA fighters definitely do not. The optics of a lawsuit -- especially one where the plaintiff claims to have been “rendered sick, sore, lame and disabled” as Chiesa has -- also jars with the conventional image of fighters as physically and mentally invulnerable, creating something of a cultural barrier to walking up the courthouse steps.

With the exception of UFC heavyweight Mark Hunt -- who is involved in an ongoing suit against future title challenger Brock Lesnar, alleging racketeering and fraud in relation to Lesnar’s failed drug test at UFC 200 -- I'm not aware of any other cases where one fighter has sued another, making this relatively uncharted territory.

With all that said however, it’s hard to fault Chiesa for bringing the case. He suffered clear and significant economic loss as a result of McGregor’s actions, and it was caught on film. Unlike most of his peers, McGregor is also filthy rich -- he earned an estimated $100 million for his mega-fight with Floyd Mayweather last August -- making him the ideal defendant; and given Chiesa’s own last disclosed paycheck, for a victory over Jim Miller four fights ago, was just $60,000, he could certainly use the money.

Another, perhaps overlooked, dimension of this story is the potential for proceedings to raise Chiesa’s public profile -- especially coming off two consecutive losses and moving up a weight class. Whilst Chiesa has always seemed content to let his fighting do the talking, given the UFC’s increasing habit of rewarding controversy and its love of all things that “move the needle,” being connected to the UFC’s biggest star in McGregor is hardly a liability. Who knows, it might even pique the Irishman’s interest in a fight opposite Chiesa someday -- if only because the narrative sells itself.

Of course, none of this can compensate Chiesa for missing out on the opportunity to fight for the lightweight title back in April. But in a weird way, by filing this suit “Maverick” may finally be making his own luck for a change.

And given everything he’s been through this past two years, can we really blame him?

Jacob Debets is a recent law graduate who lives in Melbourne, Australia. He has been an MMA fan for more than a decade and trains in muay Thai and boxing at DMDs MMA in Brunswick. He is currently writing a book analyzing the economics and politics of the MMA industry. You can view more of his writing at jacobdebets.com.