The 6-foot-4, 260-pound Cameroon-born Frenchman will carry a three-fight winning streak into his featured battle with the undefeated Jairzinho Rozenstruik at UFC 249 on Saturday in Jacksonville, Florida. Whoever survives figures to be on the short list of contenders for the Ultimate Fighting Championship heavyweight crown. Ngannou has delivered all 14 of his professional victories by knockout, technical knockout or submission, 10 of them inside one round.

As Ngannou ties up whatever loose ends remain ahead of his showdown with Rozenstruik, a look at some of the rivalries that propelled him to this point: 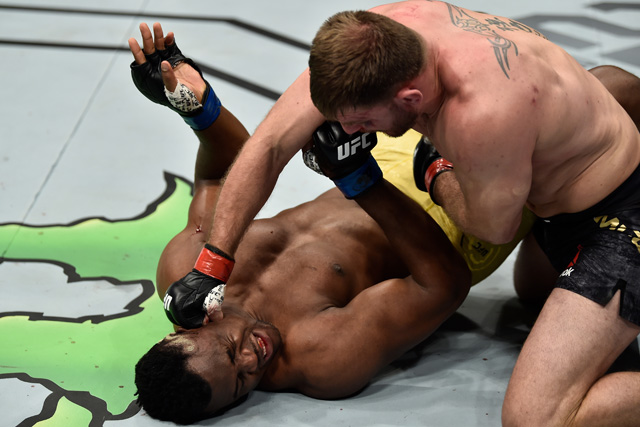 
The Strong Style Fight Team lynchpin kept his stranglehold on the heavyweight throne with a clear-cut unanimous decision over Ngannou in the UFC 220 headliner on Jan. 20, 2018 at the TD Garden in Boston. All three cageside judges scored it 50-44 for Miocic, who became the first fighter in history to successfully defend the heavyweight title on three consecutive occasions. Ngannou cracked the champion more than once with right hands in a compelling first round, but his wild swings did not net the desired result and instead came at a high price. By the start of the second, the challenger was badly fatigued and far less explosive. Miocic turned to takedowns and clinches from then on, drowning the “The Predator” with the rinse-and-repeat tactic. Ngannou’s situation went from bad to worse to downright nightmarish, with the Euclid, Ohio, native either feeding him ground-and-pound or forcing him to carry his weight on all fours. Miocic outlanded his counterpart by a 200-33 margin. 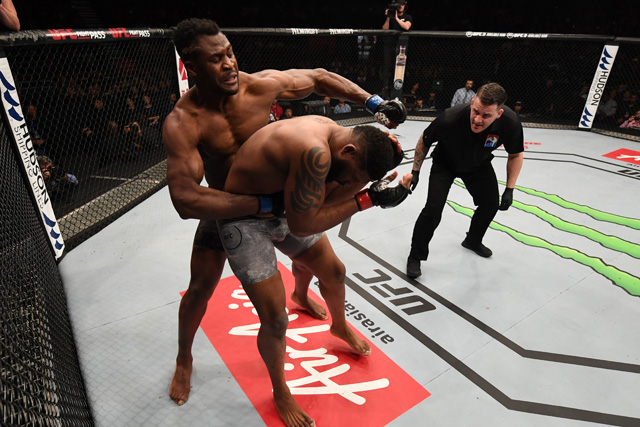 Ngannou jumped all over Blaydes in the rematch. (Photo: Getty Images)


Ngannou forced a doctor stoppage on the previously unbeaten Blaydes in their UFC Fight Night 86 heavyweight showcase on April 10, 2016 in Zagreb, Croatia. A short-notice fill-in for Bojan Mihajlovic, Blaydes met his end between the second and third rounds despite his protests. Ngannou short circuited the Elevation Fight Team rep’s takedown game, trapped him on the feet and tore into him with punches. He twice staggered Blaydes in the first round and stepped up his attack in the second, where he continued to target the American’s right eye and mixed in kicks on occasion. By the time Round 2 was complete, Blaydes could no longer see and the stoppage was called.

When they met again in the UFC Fight Night 141 headliner on Nov. 14, 2018 in Beijing, the result was even more decisive in nature. On the heels of back-to-back losses, “The Predator” steadied himself inside the heavyweight division and blew away Blaydes with punches 45 seconds into the first round. Ngannou dropped the onetime National Junior College Athletic Association All-American wrestler on all fours with a clubbing overhand right to the temple, then flurried with punches. Blaydes never recovered. Ngannou discharged one devastating round after another with both hands, prompting referee Marc Goddard to step in on Blaydes’ behalf less than a minute into the rematch. 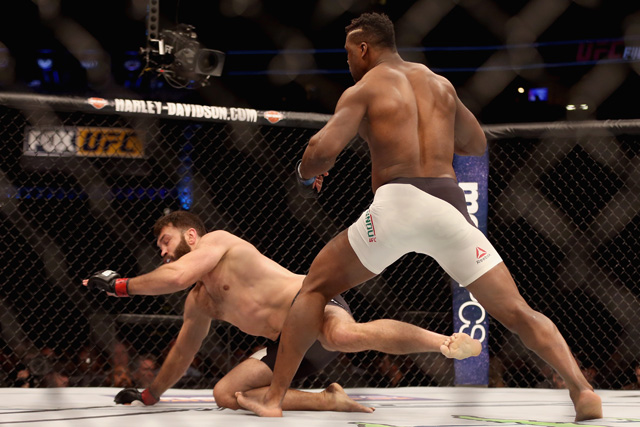 Ngannou wiped out the former champ with punches 92 seconds into the first round. (Photo: Getty Images)


Still rough around the edges, Ngannou needed to validate the growing hype behind him by bringing down a well-known adversary with a proven track record. Arlovksi fit the description to a T. Ngannou on Jan. 28, 2017 continued his ascent on the heavyweight ladder, as he wiped out the former champion with punches 92 seconds into the first round of their UFC on Fox 23 encounter at the Pepsi Center in Denver. Arlovksi fared no better than a splattered bug on a windshield. Ngannou stalked, struck and connected with scorched-earth intent. He countered a right hand from Arlovski with a devastating overhand left and followed it with a short right uppercut. The Belarusian froze momentarily and hit the deck with Ngannou in close pursuit. A series of unanswered rights on the turtled Arlovksi prompted a merciful stoppage.