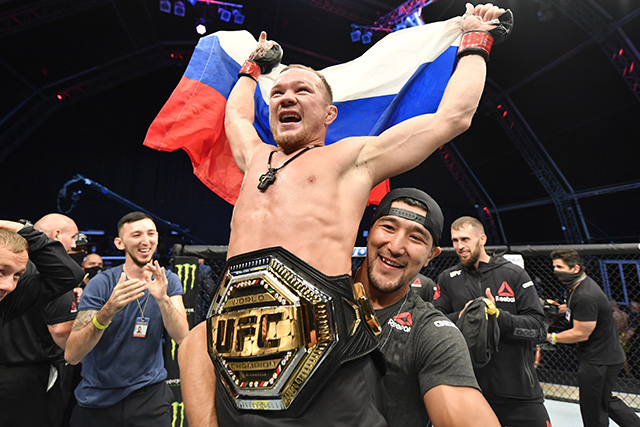 If one expands the analysis to include the Professional Fighters League, Rizin Fighting Federation, One Championship, KSW, Brave Combat Federation and other international organizations, the number of Russian fighters who are nearing contention grows exponentially. The question: Why is the country experiencing such dramatic growth? Former BCF Event Director Lucas Carrano believes it has everything to do with culture.

“Last year, I spent five days in Mahakala and was really impressed by the number of academies on every corner and how young the children start to fight and compete there,” Carrano said. “In Brazil, a country of 210 million people, most children want to be soccer players; in Russia, a country of 144 million people, a good percentage of their children want to be fighters. The result of such a competitive environment is reflecting in the MMA world, and imagine it now, when they have two UFC champions.”

The prevalence of youth training in wrestling and sambo has played an important role in Russia’s rise to prominence but so has the availability of quality platforms through which prospective fighters can hone their skills.

Working with Antonio Rodrigo Nogueira since 2015 in the development of young athletes in Brazil, Martins has watched most of the events in Russia for the past six years.

“In some places, being undefeated doesn’t mean the guy is ready for the highest world-level fighters, as sometimes he has faced easy opponents,” Martins said. “In Russia, that’s almost impossible due to the highly competitive environment. That’s why, in most cases, when you see a Russian or ex-Soviet fighter with more than 20 fights who is undefeated or with few defeats, normally he is ready to give the best fighters in the world a difficult time.”

Another byproduct of that hyper-competitive environment can be seen in top-ranked Russians in most MMA organizations. In the UFC, where Yan and Khabib Nurmagomedov rule the bantamweight and lightweight divisions, Zabit Magomedsharipov appears close to challenging Alexander Volkanovski for the featherweight title. In Bellator, Anatoly Tokov is considered a viable contender for the vacant middleweight championship. In the PFL, Azerbaijan’s Movlid Khaybulaev won the featherweight grand prix. In Brave Combat Federation, Abdoul Abdouraguimov and Eldar Eldarov are 11-1 and 12-1.

Another talent recently burst on the scene in the UFC, as Khamzat Chimaev posted two wins inside the Octagon in a 10-day period in July. Carrano first saw Chimaev in Brave Combat Federation, where he finished all four of his opponents, three of them in the first round.

“He was the scariest talent I’ve seen in all editions of Brave that I was involved in,” Carrano said. “I remember Reza Madadi telling me backstage right before Chimaev’s Brave debut that he was better than all the big guys in Sweden, including Alexander Gustafsson and Ilir Latifi. I thought he was exaggerating, but when I saw what he did in his four fights in Brave, I knew he was above average. Today, I truly believe he can be a future UFC champion.”

Not all promising Russian fighters live up to expectations once they reach the big leagues. Magomed Bibulatov arrived in the UFC undefeated and was considered a legitimate threat to Demetrious Johnson’s flyweight title reign. However, he washed out of the promotion after suffering two defeats in three appearances. Alexey Kunchenko suffered a similar fate. After starting his UFC run with back-to-back victories over Thiago Alves and Yushin Okami and pushing his record to 20-0, he was released after consecutive decision defeats to Elizeu Zaleski dos Santos and Gilbert Burns.

Two of Russia’s three major MMA champions face formidable challenges later this year, as Nurmagomedov meets Justin Gaethje in an Oct. 24 lightweight unification bout and Yan likely defends his bantamweight crown against Aljamain Sterling. Independent of those results, Russia figures to continue its arms race with Brazil and the United States for years to come.