With their double-tournament finale just over two weeks away, World Victory Road has announced the semifinal pairings for its Sengoku middleweight tournament series.

"On the other side, Santiago and Siyar, it's a fight of champions. Santiago is experienced in tournaments, and has become a tournament champion. He's emerged as a top favorite," Kokuho continued. "However, Siyar is the current Shooto world champion, and a great fighter who made a stir with his right cross against Misaki."

"This means that finals will be a Japanese versus a foreigner," Kokuho explained. "I think the nationalism could help bring the support of the Japanese fans."

The winners of the Sasaki-Nakamura and Bahadurzada-Santiago bouts will meet later in the evening to determine Sengoku's middleweight tournament champion. The lightweight tournament will conclude in the same fashion, with the previously announced semifinal bouts between Eiji Mitsuoka and Satoru Kitaoka, and Kazunori Yokota and Mizuto Hirota.

Announced for the lightweight tournament was the reserve bout, which will pit Jorge Masvidal, who dispatched Ryan Schultz last month, against South Korean Bang Seung Hwan, who dropped a competitive decision to Takanori Gomi in August. It is expected that WVR will announce a middleweight reserve bout between veterans Izuru Takeuchi and Joe Doerksen in the near future.

With Josh Koscheck stepping in on short notice to face Thiago Alves at UFC 90 on Oct. 25 in Chicago, it appeared as though Japanese welterweight Yoshiyuki Yoshida was left without a dance partner once again. However, that may not necessarily be the case.

Shu Hirata, the manager of the 34-year-old former judo standout, told Sherdog.com that he and his fighter have been told that a Koscheck bout is still a go, pending the result of the former NCAA national wrestling champion's bout with Alves.

"Apparently, Koscheck is still on, as he wants to do both fights," said Hirata. "If he gets injured [in the Alves fight], it may be Sanchez. That's what I was informed from the UFC." 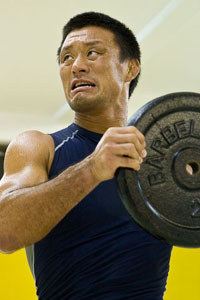 Daniel Herbertson/Sherdog.com
Yoshiyuki Yoshida will most
likely face Josh Koscheck
or Diego Sanchez.
Following his August 2007 loss to now-UFC champion Georges St. Pierre, the 30-year-old Koscheck was vocal in his desire to fight more actively in the Octagon. However, in the 14 months since, Koscheck has fought just twice, taking an exciting TKO stoppage of Dustin Hazelett in March before pounding veteran Chris Lytle to bloody unanimous verdict in July. Originally slated to meet Yoshida in the headliner of Dec. 10's UFC Fight For The Troops at Crown Coliseum in Fayetteville, NC, Koscheck stepped into Sanchez's slot against Alves at UFC 90 on Monday, after it was revealed Sanchez was injured during training.

Sanchez representative Jeff Clark told Sherdog.com that the fighter suffered a rib injury, possibly to an intercostal muscle or cartilage. The severity of the injury is not yet known, but any diagnosis of significant recovery time could pose difficulties for the UFC if Koscheck is unable to fight on a two-month turnaround following the Alves bout.

The Dec. 10 date is set to be Yoshida's second bout in the Octagon. Victorious in just 56 seconds in his May UFC debut against Jon "War Machine" Koppenhaver, Yoshida was left without an opponent at the eleventh hour last month, when Karo Parisyan was forced to pull out of their UFC 88 main card bout the day before the event due to injury.

UFC parent company Zuffa and WOWOW began their relationship over six years ago with the April 2002 broadcast of UFC 36. However, the UFC has been without a strong television presence in Japan since May 2007, when UFC 71, headlined by the rematch between Quinton Jackson and Chuck Liddell, inexplicably had no airdate listed. Following the Japanese telecast of UFC 70, WOWOW executives officially announced that they could not reach a contractual agreement with Zuffa to continue broadcasting UFC events on WOWOW.

WOWOW's inability to come to terms with Zuffa in 2007 was due to Zuffa's large ambitions in the Japanese market following their buyout of Pride, and the signing of several fighters with star status in Japan such as Mirko "Cro Cop" Filipovic, Antonio Rodrigo Nogueira and Quinton "Rampage" Jackson. However, the signings were of little help and leverage through Zuffa's enormous struggles in dealing with Japanese television executives in 2007. Zuffa boss Lorenzo Fertitta told MMA magazine Gong Kakutogi last November that he hoped to finalize a new deal with WOWOW, which currently has approximately 2.44 million subscriptions in Japan.

Beginning Aug. 4, WOWOW televised a series titled "UFC is Back!" featuring three bouts per episode, chronologically from UFC 71 onward, to "catch up" Japanese viewers. The series was designed to build toward the Oct. 19 near-live telecast of Oct. 18's UFC 89 card in Birmingham, England. Future UFC events will continue to air on a slight tape delay for the Japanese audience.

The deal is not a blockbuster broadcasting deal for Zuffa, the likes of which may be impossible in a downtime for the Japanese MMA market. However, their renewed deal with WOWOW can perhaps be aptly compared to HDNet broadcasting Dream events and other international promotions in North America, catering to a select fraction of hardcore fans.

Pancrase started October with a new champion, and will end the month with another.

The featherweight King of Pancrase throne was declared vacant earlier this month as first champion and promotional poster boy Yoshiro Maeda returned the title. The official reason for the title return was Maeda's intent to continue to compete at 135 pounds as he has done stateside, but also due to his exclusive contract with Zuffa and WEC posing difficulties for the champion to defend his title in a timely fashion.

The undefeated Sandro smashed perennially solid Miki Shida into retirement in March to affirm his place as Pancrase's top featherweight contender. Meanwhile, the 35-year-old recorded the first knockout victory of his career in April, stopping Manabu Inoue in the second round to earn his way into the King of Pancrase bout.

Greatest Common Multiple have continued to build the Nov. 8 debut card for all-female promotion Valkyrie, adding a trio of bouts to their line-up at Differ Ariake in Tokyo.

In a pairing of plucky female veterans, Naoko Omuro will take on surging Yasuko Tamada in a 100-pound affair. Omuro is coming off of a competitive decision loss to Misaki Takimoto in May, while Tamada is undefeated in the last two years, having ripped off seven straight victories.

Also added to the card is a pair of 115-pound bouts featuring Madoka Ebihara meeting Akiko Naito, and Mamiko Mizoguchi squaring off with Sakura. These two affairs will restrict ground-and-pound due to the inexperience of the fighters involved.

The Nov. 8 Valkyrie debut will be the afternoon feature of a GCM doubleheader, with the evening witnessing a Cage Force card. No bouts for the Cage Force bill have been formally announced, although it will likely feature the Cage Force bantamweight tournament semifinal between Takeya Mizugaki and Taiyo Nakahara, which was originally scheduled for Sept. 27 before Nakahara was forced to withdraw for the bout due to an undisclosed injury in training.