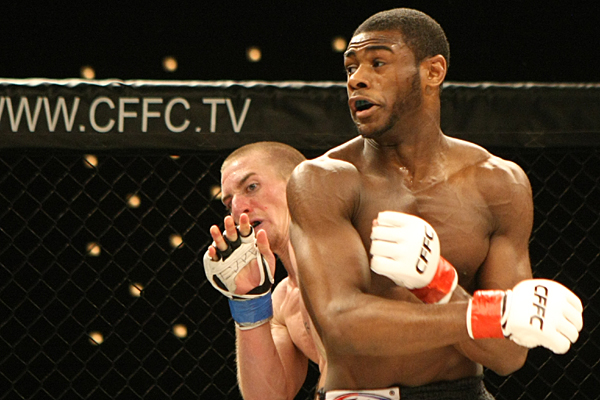 Aljamain Sterling has compiled a 7-0 mark since debuting in 2011. | Photo: Keith Mills/Sherdog.com


Aljamain Sterling started his professional mixed martial arts career in high gear, posting seven victories in as many fights in his first 16 months as a professional fighter.

However, a shoulder injury has kept the Cage Fury Fighting Championships bantamweight titleholder on the shelf since January, and the Team Bombsquad member is growing increasingly impatient about resuming his ascent in the 135-pound division.


Advertisement
“I hurt my shoulder during wrestling practice and tore my labrum,” Sterling told Sherdog.com. “I’d tweaked it when I wrestled in college, and it just kept getting worse and worse until I had to go to the doctor for it. I’d torn three-quarters of the labrum, part of my biceps tendon and injured the glenoid bone, as well. I had the surgery Jan. 24 and will be out about six months.”

Sterling, 23, last fought at CFFC 16 in August, when he submitted Sidemar Honorio with a second-round rear-naked choke at the Borgata Hotel and Casino in Atlantic City, N.J.

“It’s very frustrating to not be able to train,” he said. “Sitting down and watching practices and not even being able to shadowbox is really hard. To go from practicing three times a day, six days a week to nothing just drives you crazy. I’ve been sort of at a loss about what to do. I just got cleared to run and lift weights, so I’m working my back to 100 percent, but it still sucks.”

Sterling was a two-time NCAA Div. III All-American at SUNY Cortland, where he has been an assistant wrestling coach for the past two seasons. During his three-year career, Sterling was 87-27 with 26 falls, finishing fourth at the NCAA wrestling championships at 133 pounds as a junior and sixth at 141 pounds as a senior. How he came to become a professional MMA fighter involves a meeting with a future Ultimate Fighting Championship light heavyweight titleholder, the social networking website MySpace and a trip to the Team Bombsquad gym.

“I’m from a family of 20,” Sterling said. “I have six brothers, and we used to fight a lot. My father wanted us to get into boxing, and if that’d happened, that would've been cool. I started by college career at [Morrisville State College], where I met Jon Jones. He and I both transferred to different schools and he sort of fell off the map. I saw a couple of pictures of him on MySpace where he was fighting and grappling and we sent some messages back and forth. 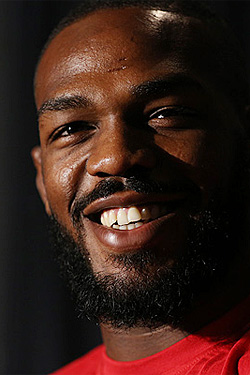 Photo: Dave Mandel/Sherdog.com
Jones had an impact.
“I don’t go on MySpace anymore, but I still have those messages to this day,” he added. “He told me to come down [to Team Bombsquad], and I came down and had my first boxing lesson. I got beat up by a 14-year-old kid. I enjoyed the gym and thought it was something I could do after wrestling in college.”

Sterling started his MMA training when he was a sophomore at SUNY Cortland and competed in several amateur fights during the offseason. Soon after his college eligibility expired, he turned professional with a three-round unanimous decision over Sergio da Silva in April 2011.

He delivered four victories in the first four months of his career and sports four finishes -- one knockout and three submissions -- among his seven wins thus far.

“I didn’t want to waste any time,” Sterling said. “I wanted to be the first UFC champion who was still in college, but I had to finish my eligibility first.”

Ryan Ciotoli serves as Sterling’s head coach at Team Bombsquad and believes the 23-year-old’s main strengths revolve around his wrestling and game planning.

“We’ve known each other for about four years now,” Ciotoli said. “He is a very smart kid. He’s like a chess master. He thinks about his fights and attacks his opponent’s weaknesses really well. He’s good at strategy. He’s also good at mixing his jiu-jitsu with wrestling, but mixing those two with his striking is what he needs to work on. The big thing is working on his transitions, and he’s still young. Once he does that, he could be a top contender.”

Sterling took the counter wrestling route to his submission over Honorio. He sees it as just another example of using his base skill to earn a victory in the MMA arena.

“My grappling is different,” Sterling said. “I’m able to blend my BJJ and wrestling. I do a lot of things people don’t traditionally do, and people don’t know what to expect from me. I can set things up and be able to get dominant back control on them. I also feel like my length is a big asset. I’m 5-foot-7, so I might be tall for the weight class, and that gives me some advantages.”

Sterling admits he needs to do a better job of hitting the ground running in his bouts.

“I think something I might be behind on is starting faster,” he said. “When I get out there, there’s a feeling-out process, and it might be close to a round before I really get going. I need to do a better job of pulling the trigger and setting the tone for the fight, that along with my striking and ground-and-pound. I think I have decent ground-and-pound, but I want to make sure every punch counts so I can put my opponents away. The whole point of fighting is finishing fights. Going to a decision is something I don’t like. I like clear-cut finishes.”

The shoulder injury will keep Sterling sidelined until sometime this summer or early fall. He has no interest in signing a long-term deal, unless it is with an organization like Bellator MMA or the UFC.

“
The whole point of fighting
is finishing fights. Going to a
decision is something I don’t like.
I like clear-cut finishes.

“He has an awkward style, but he's a dynamic fighter,” Ciotoli said. “He competed at 133 and 141 [pounds] in college and walks around at 150, so he’s not losing a lot of weight to get to 135. The progress he made in his career has happened really quick. He’s only been fighting professionally for just over a year.

“He just needs to continue to develop,” he added. “We’re not in a hurry to get to that next level, but he’s more than ready for it. It’s really just being patient. One of these days a slot will open up and I think he’ll be ready to jump in there if something does open up.”
Related Articles
Latest News
ALLUFCBELLATORPFLONE