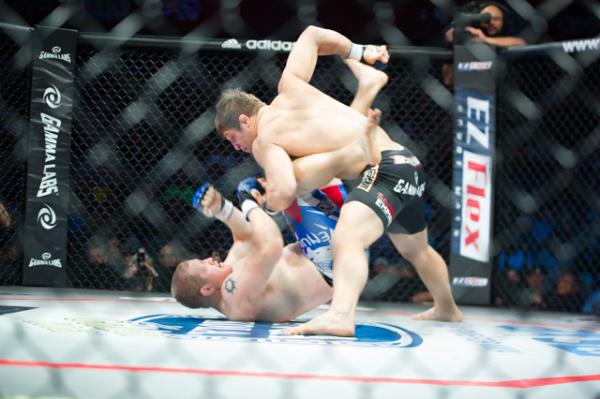 
Before a fighter can win a title, he has to prove he has the chops to contend for the championship.

Middleweight prospect Andrew Sanchez will try to make that move on Friday, when he takes on Miles Marshall in a bout that will vault the winner into a 185-pound title fight within the Resurrection Fighting Alliance promotion. The Sanchez-Marshall fight will serve as the co-main event at RFA 13, which will take place at the Pershing Center in Lincoln, Neb.

“This is a big fight for me,” said Sanchez, who has finished all four of his opponents. “If I win, I fight for the RFA title, and I’m pretty excited about it. [Marshall] is tough. He’s a brawler with a lot of power and I have a lot of respect for him. He goes all out all the time. Somebody’s going to get finished. This fight isn’t going to a decision.”

The 25-year-old Sanchez will be fighting in his opponent’s hometown, but he feels he has an answer for whatever Marshall might try to throw at him.

“I do have a lot of respect for him as a fighter, but brawling all the time isn’t a smart way to fight,” said Sanchez, who represents Finney’s Hit Squad out of St. Louis. “He’s not going to beat me with his style. If he comes out swinging, he’s going to wind up on his back and it’s going to be over. His wrestling is nowhere near my level and his game off his back isn’t there. He does have power, but that’s his only chance of winning.”

In his most recent outing, Sanchez -- a four-time All-American and two-time NAIA national champion at McKendree University in Lebanon, Ill. -- took just 1:51 to knock out Todd Meredith. That fight, which came at RFA 11 in November, saw Sanchez take down Meredith, punch his way into back control and then unleash a flurry of punches and elbows that forced the referee to stop the fight.

Sanchez made his professional MMA debut in June 2012 with a first-round submission of Edward Smith. He notched three victories in a five-month span, culminating with a first-round technical knockout of Thomas Jones in November 2012, before taking a year between the Jones and Meredith fights. With only four months between appearances this time, Sanchez said preparations for his upcoming bout have gone well.

“Camp has been great,” Sanchez said. “I’ve been doing my thing in St. Louis, but it can be kind of hard to find MMA talent in this area, so my coaches and I went on a trip to the East Coast. We went to Renzo Gracie, Phil Nurse and the Tristar Gym. We did some sparring with Rory MacDonald and Francis Carmont, and that was great for my confidence. I got a chance to train with some of best guys in world, and once I step in that cage, my confidence is going to be sky high.”

Like a lot of fighters, Sanchez came to MMA after completing his collegiate eligibility in wrestling.

“I only wrestled two years in high school, and I wasn’t recruited very much,” Sanchez said. “I went to a small school, won those national titles and just loved it. After college, there isn’t much for a wrestler, but I wanted to keep competing. In college, I did jiu-jitsu in the offseason. It was nice, because I didn’t get burned out. It just worked out perfect.”

Because of his wrestling and jiu-jitsu background, Sanchez rates his ground game as his strongest asset.

“Obviously, with the wrestling and grappling, I can make life miserable for a lot of people,” he said. “If I’m on top of you, I’m going to [mess] you up. When I’m on top, I’m always working for something, whether it’s punching or passing your guard. I’m always pushing for more. It’s a very grinding style, and I have very good cardio. I’d say I’m also a very smart, very calculating fighter, too.”

Sanchez admits his standup is not as advanced as the rest of his game. However, with a pair of knockouts in his first four fights, he does have some pop in his punches.

“My striking has come along,” Sanchez said. “A lot of people don’t know what level I’m on when it comes to my striking, but I’m pretty damn good. I’ve fought a lot of muay Thai guys and boxers in training. I just haven’t had a chance to show it yet. My striking isn’t on par with my grappling, but I’m working on it.

“Also, I’ve been working on my transitions,” he added. “When it comes to straight boxing or grappling, I’m pretty good, but my transitions from one to the other are still lacking. Sometimes they’re not mixing so well, so I’m working on my fluidity. I feel like once that starts coming together, the sky’s the limit for me.”