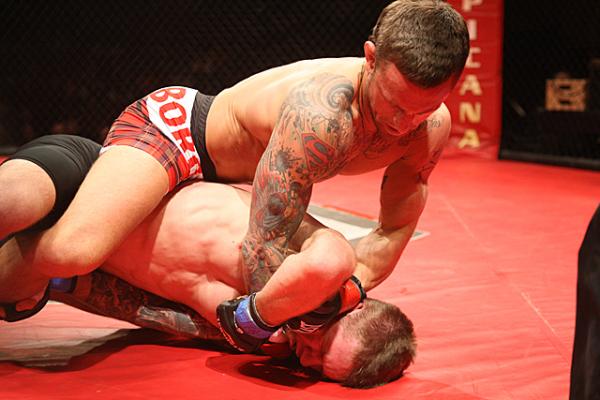 Gregor Gillespie has finished all five of his opponents in the first round. | Photo: Keith Mills/Sherdog.com


Most professional mixed martial artists hope to someday reach the sport’s biggest stage: the Ultimate Fighting Championship. However, for unbeaten lightweight prospect Gregor Gillespie, just being able to compete in MMA is quite an accomplishment. The four-time NCAA Division I All-American wrestler has overcome substance-abuse problems and injuries that might have had lesser men giving up the sport and moving on with their lives.

“I have a story to tell and things to accomplish to make things right,” Gillespie told Sherdog.com. “The UFC is where I’m going. That’s where I belong. The best fighters are there, and I want to be there myself. There are some phenomenal fighters in Bellator, but they’re not 15 fighters deep, and that’s where I want to be.

“I can’t wait to be on a platform in the UFC and be able to reach a larger, broader audience with my story,” he added. “I can only reach a certain audience right now. Once I get to the UFC, I can win big fights, get my story out there, and anyone who is struggling can see what I came through. I pulled myself out from where I had nothing. I literally drove myself to rehab with a car that wasn’t mine. If I help one kid not die of an overdose, then I’ve done my job. If I can help one person who’s tired of doing things the wrong way, I love that. I hope that someday, 10 years down the road, some kid is successful and tells me that he was going down the wrong path, heard of me and straightened himself out.”

Gillespie’s problems with drugs and alcohol started in high school and continued through his time at Edinboro University, where he won a national title in 2007 at 149 pounds and still holds the school record for most wins in a career (152) and highest career winning percentage (.917).

“I have a super-addictive personality,” Gillespie said. “I was young and immature and couldn’t see I was getting sucked in. I didn’t go to rehab until May 2010, over a year after my last NCAA tournament, but I did a lot of [expletive]-up s--- in college, too. I wasn’t squeaky clean in college or high school, and it got out of hand towards the end of my college career and after that. I was suffering through college, and I was doing things completely the wrong way. Everything that successful athletes were doing, I wasn’t. I’m not proud of it, but it was reality back then.”

Having completed a stint in rehab, Gillespie started training to make his professional MMA debut. However, in October 2012, the injury bug bit him hard in the form of a broken arm. Worse yet, he found himself dealing with a case of MRSA that left him sidelined for several months.

“Everyone knows my drug addiction story, but my injury was on par with that as to how tough it was to deal with,” Gillespie said. “I’d been training for my first pro fight and sparring. I blocked a kick and broke the ulna in my forearm. It was a bad break, to where they had to put a plate and screws in my arm. Then I got MRSA in the bone. I was in the hospital for a week and then I walked around for two months with a backpack on my back pumping my arm with antibiotics. I wasn’t allowed to sweat or work out, so I walked 10 or 15 miles a day. I’d do a ton of sit-ups with the windows open in winter so I wouldn’t sweat. It took a lot of rehab to come back from it. It was a difficult 15 months and a lot of people would’ve given up, but I knew what I wanted and what I needed to do to fulfill my destiny.”

To overcome drug addiction and a debilitating injury before ever even making his debut was especially challenging for Gillespie.

“It wasn’t like I was 7-0 and close to signing with the UFC,” he said. “I’d never fought before and was only 25 years old. It was one of the most difficult things I’ve had to do -- ever.”

Gillespie finally touched down in MMA in January 2014, stopping Kenny Gaudreau in 98 seconds at a Ring of Combat event. Since then, he has become a mainstay for the New Jersey promotion, having fought in five straight events while recording a first-round finish each time out. Most recently, he tapped George Sheppard with an arm-triangle choke in 3:45 at Ring of Combat 51 in June to capture the organization’s regional lightweight championship. Gillespie will return to the cage at Ring of Combat 52 on Sept. 25, when he takes one Shohin Safarov at the Tropicana Casino and Resort in Atlantic City, N.J.

While he remains happy competing under the Ring of Combat banner, Gillespie wants to move on to the UFC sooner rather than later; and he sounds willing to take whatever steps necessary to make it happen.

“I would love for a short-notice fight in [the] UFC to pop up,” Gillespie said. “That would be ideal. I could do a fight on two or three days’ notice. I’m always within striking distance of 155 [pounds]. I’m the guy [the] UFC could call up anytime and make a fight happen. I don’t have training camps. I’ve been in camp for four years basically. My workouts [and] sparring or whatever are all the same, whether I’m just around the corner from a fight or three months out from a fight. I walk around at an extremely manageable weight. At this point, I’m not sure what the holdup is. I don’t think there’s a reason for me not to be there. I could beat 99 percent of the guys they have signed right now.”

After everything he has been through, Gillespie admits he has learned his share of lessons and believes he can be one of MMA’s premier lightweights, provided he maintains his focus.

“I’m not a bad person for what I did, and a lot of people get sucked into it,” Gillespie said. “I’m over five years clean and sober [from abusing drugs]. I had a period, post-college, where I went to hell and back. When I was in high school and college, I did a lot of [expletive]-up s--- and still was successful. I could go back to high school or college and wonder how great I could’ve been, but there’s a part of me that says I shouldn’t wonder how good I might have been. Maybe that’s what got me through the grind. Maybe I was too immature to do it the right way. Maybe I would’ve folded under the pressure to do everything right. I don’t know. I do know this, though. If I can do things wrong and win, imagine what I can do now that I’m clean. I really think I can be one of the greatest of all-time.”

While Gillespie has aspirations of becoming a top-notch fighter, he also has plans for his post-MMA life; and they do not include returning to a life of drugs and alcohol.

“I have a checkered past and I’m not proud of it, but I’m proud of putting it back there in the past and coming out of it,” Gillespie said. “I’m proud because it made me who I am. I’m not afraid of falling back into that. I know there will come a time when I can’t fight, but then I’ll go back to school and get a degree or do something constructive. I know where my aim has to be. I’m a lot more self-aware and can catch myself doing things that might lead me down the wrong path. Maybe I’ll go back to school, open a gym, go into coaching or whatever, but I’ll be productive.”