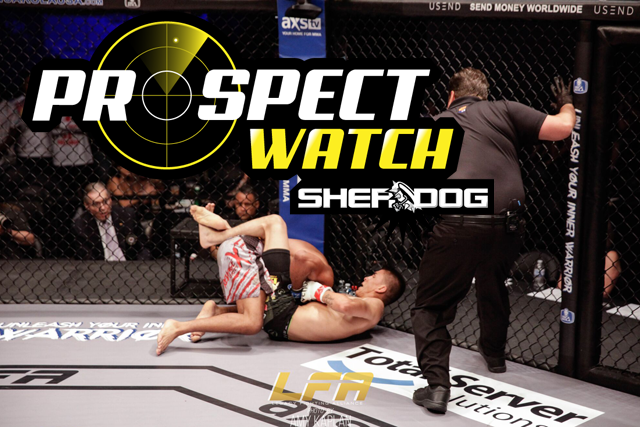 Some small-town kids dream of moving to the big city to pursue acting or to become a doctor, but Mario Bautista moved there for the expressed purpose of getting better at beating up others.

“I’m from northern Nevada, a small little town called Winnemucca, where there are only about 5,000 people,” Bautista told Sherdog.com.

Bautista was a standout wrestler in high school, and after graduation, he was eager to find something new to quench his thirst for competition. After discovering a jiu-jitsu gym owned by former mixed martial artist Jack Montgomery, he fell in love with the sport and accepted his first amateur fight after only two months of training. Shortly after, the gym shut down and Bautista needed to find a new home. He found it 750 miles away in Phoenix.

“After my gym in Nevada shut down, I didn’t do anything for a couple of months and went crazy,” Bautista said. “It was a small town and I needed to get out of there, so I got involved with [the] MMA Lab.”

Bautista has been with the MMA Lab camp for four years and has lived in Arizona since he moved there in 2013. He took 10 amateur fights, some of them on reservations, and compiled a 9-1 record across two years of valuable development. The 5-foot-9 bantamweight turned pro in May 2017, debuted against Jesse Orta at an Iron Boy MMA event and punched his way to a first-round technical knockout. The Nevadan did not take much time to savor the win, as he took his second professional bout at Tachi Palace Fights 32 a little more than two months later. Bautista again found himself victorious, as he submitted Devon Chavez with a brabo choke in the second round. The 25-year-old takes pride in staying in shape.

“I train year-round, and I don’t take any time off after fights,” Bautista said. “I am always right back working out, and I’m always in the gym.”

That mindset paid dividends in the third fight of his career, as he locked horns with DeMarcus Brown under the Smash Global banner on three days’ notice, all while moving up to 145 pounds. Bautista submitted Brown with a rear-naked choke 4:46 into the first round to improve to 3-0. He feels he has found a home at the MMA Lab, where the level of competition and training under coaches John Crouch and Benson Henderson have been a perfect fit for the small-town grinder.

“The training partners and the atmosphere is amazing here,” Bautista said. “It is not your typical MMA gym, where everyone is on their own. It is real family-based. It reminds me of a wrestling team that everyone is together working towards something.”

Bautista linked arms with the Legacy Fighting Alliance in 2018 and debuted with the organization at LFA 31 on Jan. 19, as he forced a second-round doctor stoppage against Raphael Montini de Lima. He continued his success at LFA 44, where he submitted A.J. Robb with a guillotine choke in the second round, pushing his record to 5-0 with five finishes -- three by submission and two by technical knockout.

“I am always looking for the finish,” Bautista said, “and I am very well-rounded, as my record would show you.”

While Bautista has only been fighting for four years, he feels as though he has started to come into his own. Reaching the Ultimate Fighting Championship remains his goal, but for now, he has shifted his focus to a bantamweight clash with Kevin Natividad at a Combate Americas event on Sept. 14 in Phoenix. Anchored at the Arizona Combat Sports camp, the 25-year-old Natividad sports a 6-1 record and finds himself on a two-fight winning streak.

“I just want to keep getting better and focused on this fight,” Bautista said. “I am hoping a win in September would give me a chance at the UFC or even [Dana White’s Tuesday Night] Contender Series. I am just looking for an opportunity. This will give me the chance to prove I am the best bantamweight in Arizona.”