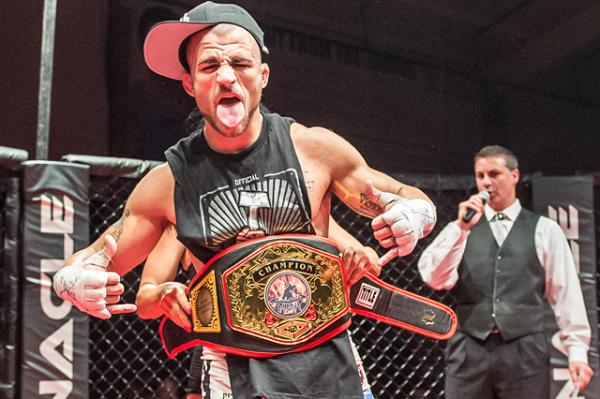 Mark Cherico has won all seven of his fights, finishing five of them. | Christopher Nolan/MetCon Photos, LLC


You need to have a good work ethic to make it big in MMA. Those without one generally do not last long.

The idea of working hard to move up the ranks is not one to which the unbeaten featherweight Mark Cherico is averse. After all, he did work at the United Postal Service and a pizza parlor while plying his trade on the amateur circuit, oftentimes waking up at 3 a.m. to fulfill both jobs before turning to training. He would usually not arrive home until 11 p.m. and then rose the next day to do it all again. Such drive has helped Cherico, a 28-year-old Pittsburgh native known as “The Pride of Bloomfield,” build a perfect 7-0 record as a professional and make him one of the top prospects on the East Coast.

“My career has gone well so far,” Cherico told Sherdog.com. “I wouldn’t say it’s been perfect because I didn’t finish my last two opponents. I want to get a finish every time or I don’t consider it a perfect performance. It’s going to be harder to finish as my level of competition gets harder, but I always want to get a finish.”

Cherico -- who trains regularly at the Pittsburgh Fight Club and a Renzo Gracie Jiu-Jitsu affiliate in the Steel City -- has also put in time with American Top Team in Florida and Team Alpha Male in California. He believes the change in scenery and introduction to new training partners has helped him become a more complete fighter.

“I really think training in these different camps has helped me,” said Cherico, who sports five finishes among his seven victories. “It adds a lot of confidence to be able to do well or hang in there in a room of UFC fighters. I learned a lot [of things], and I’ve been able to bring them back and add them to my skill set. It’s all about adding more tools to the tool box.”

Cherico is not a former high school wrestler, nor does he have a traditional combat sports background. In fact, he came to mixed martial arts while he was working as a prep cook for Giant Eagle, a Pittsburgh-based grocery store chain.

“It was after high school,” Cherico said. “I’d just gotten off work and I ran into a neighbor of mine who had a bag of gear with him. I asked him what he was training for, whether it was boxing or what. He told me it was mixed martial arts, and I’d heard about it. I thought it might be something worth trying, so I went with him and he sent me to a professional fighter here in Pittsburgh.”

Cherico developed quickly. He turned pro in April 2012, taking just 56 seconds to tap out Donte Adams on a North American Allied Fight Series card. He posted two more wins before the end of 2012 and used a first-round armbar to submit Billy Vaughan at a Pinnacle Fighting Championships event in April 2013. Cherico followed the Vaughan victory with a second-round technical knockout of Ultimate Fighting Championship and Bellator MMA veteran Donny Walker two months later to move to 5-0. He took nine months off before returning with a unanimous decision over Brady Hovermale in March. In his most recent fight, Cherico had to go the distance again, this time beating Luis Guerra via unanimous decision at a Pinnacle FC event in July.

“The way the kid mixes his boxing and takedowns is some of the best in his weight class,” said Lou Armezzani, Cherico’s coach at Pittsburgh Fight Club. “He’s a very solid striker, and even though he didn’t grow up being a wrestler, he’s adept at MMA wrestling. He has a good knack for the combination of striking and takedowns.”

Along with being able to mix his striking and takedowns, it should come as no surprise that Cherico thinks his work ethic is one of his biggest strengths.

“I work really hard,” he said. “I’m in the gym every day, whether it’s training or just to work on strength and conditioning. I’m in the gym 24-7 and now I work where I train at, so I’m living the dream. I’m there all day, every day.”

Cherico is scheduled to fight again under the Pinnacle FC banner on Nov. 26. He hopes a call from an organization such as the UFC, Bellator or the World Series of Fighting is not far off.

“I feel like I’m ready for the UFC,” Cherico said. “The more fights, the more ready I’ll be, but I feel like if they called, I’d be ready to go.”

Armezzani agrees that Cherico is likely ready for the leap to the big stage, but he believes a little more experience will help him when he does go to a major organization.

“Right now, I feel like the only takeaway from him would be his lack of experience at the next level,” Armezzani said. “He’s been fighting in smaller promotions, but he’s beaten everybody he’s fought so far, and once he makes the transition, I feel like he’s going to be really great. I believe we’re ready for the UFC as soon as they call. We’re ready to show up. He is training really hard right now, and they could call at any time. I don’t think he needs any more experience where he’s at. He’s ready for the next level.”
« Previous Sherdog Prospect Watch: Phil Hawes Next Sherdog Prospect Watch: Marcelo Castaneda »