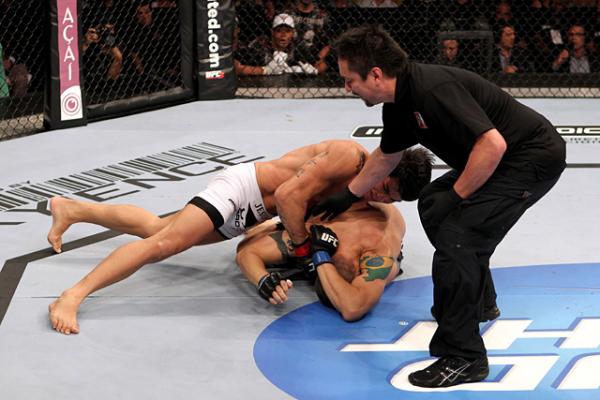 Erick Silva was disqualified for illegal blows to the back of the head at UFC 142. | Josh Hedges/Zuffa LLC/Getty Images


Most mixed martial arts robberies generally require at least 15 minutes to unfold. Others, depending on the setting, can take up to 25 minutes.

They can be presided over by familiar names such as Peoples, Weeks and Hamilton, but they can also be authored by incompetent unknowns in remote locations. They can be influenced by wild punches, aggressive movement, meaningless takedowns and even good old fashioned human bias. At a robbery’s conclusion, feelings of shock, confusion and eventually outrage are par for the course.

In short, the archetype for such an incident only serves to reinforce the tired old adage: “Don’t leave it in the hands of the judges.”

Every once in a while, however, something comes along to break the mold. At UFC 142, surging Brazilian prospect Erick Silva left nothing to chance. By dispatching Carlo Prater in a mere 29 seconds, he made sure the services of the cageside judges at the HSBC Arena in Rio de Janeiro, Brazil, were not needed. For those in attendance -- some of whom might have witnessed the young fighter’s rise to prominence in the Brazilian-based Jungle Fight promotion -- it appeared to be the next step in the evolution of a star-in-the-making.

That is, until referee Mario Yamasaki disqualified Silva for landing what he perceived to be multiple illegal blows to the back of his opponent’s head. Replay evidence did little to support Yamasaki’s claim, and the referee was grilled by Ultimate Fighting Championship analyst Joe Rogan regarding his ruling in the bout’s aftermath. When it comes to media attention, referees generally are kindred spirits with football offensive lineman: a job well done means both might be seen but rarely heard.

“I have to decide right there and then,” Yamasaki said. “There is nothing I can do.”

With all due respect to the likes of Frankie Edgar and Nick Diaz, Yamasaki’s erroneous heat-of-the-moment decision makes Silva-Prater an easy choice for Sherdog.com’s 2012 “Robbery of the Year.”

Little was expected of Prater, a former World Extreme Cagefighting 170-pound title challenger, heading into his first Octagon appearance. Despite owning wins over Spencer Fisher, Carlos Condit and Melvin Guillard outside of the promotion, most oddsmakers listed Prater as one of the biggest underdogs on the card.

That line of thinking had as much to do with Silva as it did with Prater. A Team Nogueira representative, Silva had wowed his countrymen in his promotional debut at UFC 134, knocking out Luis Ramos in a mere 40 seconds. The Brazilian had not tasted defeat since 2006, and with a few more dominant performances like the one he gave against Ramos, it would not be hard to imagine the then-27-year-old quickly rising up the list of welterweight contenders.

File Photo
Prater’s win was controversial.
Silva wasted little time in justifying his considerable hype, landing a beautiful knee to the body from which Prater would never fully recover. “Indio” quickly drove his foe to the mat and unleashed a series of punches and hammerfists to the side of the head. A dazed Prater was unable to escape the barrage, and Yamasaki intervened on his behalf, clinching what appeared to be another dominant victory. Moments later, Yamasaki’s ruling was met with derision by the Brazilian fans, and a still-recovering Prater had picked up his first UFC victory in the most unlikely way possible.

“I have great respect for the referee,” Silva would say through a translator. “I see most of [the punches] hit the side of the head. I don’t see any that hit the back of the head.”

The video footage supports Silva’s assertion. According to FightMetric.com, the would-be victor landed 12 total strikes -- eight significant -- before the action was halted. No matter the angle, it appeared that nearly all of Silva’s strikes were legal. Only one clearly landed on the back of Prater’s head.

In Yamasaki’s defense, MMA does not have instant replay, so he was not allowed to review tape of the bout’s final moments to determine whether or not he had made the correct call. However, it does not speak well for the second-generation martial artist that most everyone who viewed the fight would have awarded the victory to Silva.

“Erick hit a knee and Prater fell back sitting and grabbed Erick’s leg,” Yamasaki later told Sherdog.com. “Erick began to strike Prater’s head, and, depending on what angle you see it from, you see the punches in a different way. From where I was at, I saw at least five punches hit the back of the head, and I yelled at Erick two or three times to not hit back of the head, and he kept punching. There were about 11 punches there, and I stopped the fight.”

After the bout’s conclusion, there was still the question as to whether the ruling would be overturned. Five days later, UFC Vice President of Regulatory Affairs Marc Ratner confirmed the decision would stand.

“Based on the referee's verbal warnings and his determination that the blows were intentional and a disqualifying foul, this is not the type of decision that can be reviewed,” Ratner said in a release. “Recently, Zuffa has decided to implement the use of instant replay at all international events that are self-regulated and to encourage all regulators to consider the feasibility and effectiveness of instant replay in the sport of MMA. While instant replay would not have reversed the call in the Silva-Prater bout, we believe that it could be valuable to referees and the sport in the future.”

Since that night, the careers of the two fighters involved have taken divergent paths. Prater has lost three straight fights, including two in the Octagon -- a skid that could just as easily be four in a row.

Meanwhile, Silva overwhelmed Charlie Brenneman at UFC on FX 3 before coming up short in a memorable bout against Jon Fitch at UFC 153. Narrow loss aside, Silva’s future seems to as bright as it ever was. As time passes, his loss to Prater will be remembered more as an asterisk-worthy piece of trivia than a debilitating defeat.