What makes a “Submission of the Year?” Out of the dozens of submission finishes each year in top-level global promotions such as the Ultimate Fighting Championship, Bellator MMA and One Championship—or hundreds, if you include smaller regional shows around the world—what makes a handful of them stand out as especially memorable or praiseworthy? If the winning entries from previous Sherdog Year-End Awards are any indication, it usually takes two things: impressive technique, and enough stakes or historical context to make it matter. For example, our 2018 winner, Ryan Hall, landed a rare heel hook from an even rarer Imanari roll, but what elevated a “Submission of the Night” into a “Submission of the Year” is that it was the first time we had ever seen the legendary B.J. Penn tap the mat.

This year offered a worthy batch of contenders for the signature sub of 2020. There was Thiago Moises, who tapped out Michael Johnson with a nasty Achilles lock to snatch the victory in a fight he had been losing badly. There was Mackenzie Dern, who kicked off her resurgent 2020 with a beautiful kneebar from the bottom, just moments after getting slammed to the canvas by Hannah Cifers. Over in Legacy Fighting Alliance, Crystal Vanessa Demopoulos won the promotion’s inaugural strawweight title with an ultra-rare inverted triangle choke, strangling Sam Hughes all the way unconscious. There was even a last-minute candidate, as Jimmy Flick made a big impression on the final UFC card of the year, snaring Cody Durden with a flying triangle choke in the first round.

However, in the eyes of the voting panel, one submission stood out above the rest. For its combination of technique so dazzling that we were left arguing over what to even call it, and the competitive impact of propelling one of MMA’s top prospects into true contender status, A.J. McKee’s modified neck crank on Darrion Caldwell at Bellator 253 on Nov. 19 is Sherdog’s “Submission of the Year” for 2020.

Heading into the fight, which doubled as a semifinal in Bellator’s ongoing featherweight Grand Prix, the 16-0 “Mercenary” had blown past every obstacle placed in his path so far, usually with ease and often in breathtaking fashion. Nonetheless, former Bellator bantamweight champ Caldwell was rightly seen as McKee’s sternest test to date, an NCAA Division I wrestling champion whose collegiate mat chops had fully carried over to the MMA cage. Even as a moderate underdog, Caldwell’s credentials raised unique questions: What will happen when McKee isn’t the better wrestler in the cage? How will he react if he’s taken down?

As it turned out, we learned the answer to the second question in a hurry, as it was barely 15 seconds before Caldwell shot a fast single-leg takedown, transitioned to a double-leg and then deposited McKee on his rear in the center of the cage. Throughout the takedown, the “Wolf” did a beautiful job of keeping his head positioned against McKee’s chest, avoiding the kind of guillotine chokes that had accounted for two of his three career losses. As Caldwell kept his posture low and looked to drop elbows, McKee didn’t immediately try to sweep or escape, but did force Caldwell into reactive mode by throwing strikes from the bottom and constantly switching between open, closed and half-butterfly guard.

After Caldwell postured up long enough to drop a hard elbow strike, McKee began to set up the finish. He trapped Caldwell’s left arm with his right, and when Caldwell pulled his arm free, McKee forced Caldwell’s head into his armpit. As he did so, he closed up a body triangle from the bottom. McKee then grabbed an underhook on the right side, locked his arms behind Caldwell’s neck and applied pressure. Before the Bellator booth of Mike Goldberg, “Big” John McCarthy and Josh Thomson even realized how tight the hold was, Caldwell was tapping frantically. The shocking finish had taken just 71 seconds.

In the immediate aftermath, the logical questions were, “What was that and what do we even call it?” On replay, McCarthy and Thompson ably identified and explained the mechanics of the move, but to call it a mere neck crank does it a disservice. While it’s a finish that had arguably never been seen before in high-level MMA, it’s close to being textbook grappling. Which textbook, you ask? Bas Rutten’s. While some of the specific details of the “Uncle Bas Special” are slightly different—closed guard instead of a body triangle; S-grip instead of a Gable grip to biceps grip—the operating principle is the same, and all of McKee’s changes had the effect of making the hold more painful and harder to escape. 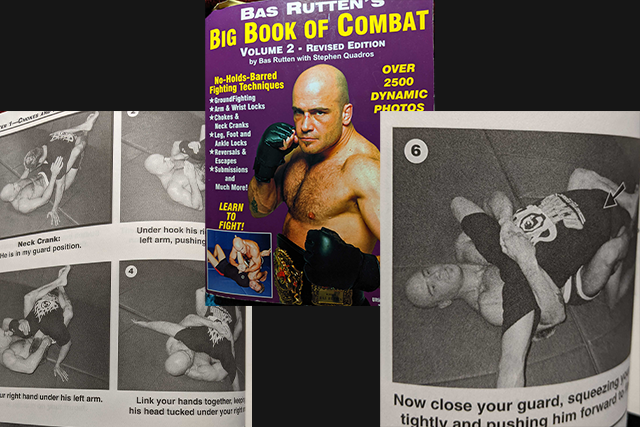 
Rewatching the finish, one of the most impressive elements is how calm McKee was, and how practiced and effortless he made it seem, as if this very uncommon technique were something he had drilled hundreds of times. McKee’s neck crank submission of Caldwell was just the most recent example of the 25-year-old prodigy making the sublime look simple, it propelled him into Sherdog’s featherweight Top 10, it earned him a presumptive title shot in the tournament final next year, and it made this category an easy one for our awards panel.
« Previous Sherdog’s 2020 Breakthrough Fighter of the Year Next Sherdog’s 2020 Comeback Fighter of the Year »