SAN JOSE, Calif. -- Scott “Hands of Steel” Smith lived up to his nickname on Friday, as he knocked out fellow UFC veteran Terry Martin in the Strikeforce “Destruction” main event before 8,152 at the HP Pavilion.

Martin backed Smith into the cage in an attempt to close the distance and was met with a short right hand that ended his night in just 24 seconds.

Following the second-fastest finish of his career, Smith (14-5) immediately went into his superhero flex pose and enjoyed the cheers from the crowd. Martin (18-6) has dropped four of his last six fights, three of them by knockout.

With fans firmly behind him, the San Jose-based titleholder scored with an immediate takedown against Sobral and stifled the Brazilian jiu-jitsu black belt on the ground. A loose attempt at a transition from Sobral allowed Southworth to control the action further before the two men returned to their feet. 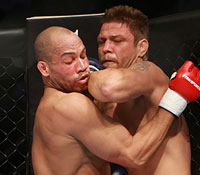 Dave Mandel/Sherdog.com
An elbow from "Babalu"
opened a gash above
Southworth's right eye.
Clinch work against the cage drew boos from the raucous crowd, and referee “Big” John McCarthy split up the two men after a period of inactivity, placing them in the center of the cage. Back in the clinch, “Babalu” landed a wicked elbow that sliced open the American Kickboxing Academy representative.

McCarthy promptly had ringside physicians check the cut, and fans cheered as Southworth was allowed to continue. Southworth repaid their admiration, as he countered the Brazilian with a straight right that sent him to the mat. Sobral (31-7), however, weathered Southworth’s storm until the bell brought an end to the round.

Between rounds, cage-side doctors deemed Southworth unfit to continue because of the cut. Sobral, his reign as Strikeforce champion having begun, jumped joyously.

“I tried to push the pace,” Sobral said. “I knew he was going to hold me against the cage.”

The controversial Brazilian quickly answered calls for a rematch with Southworth (9-6), who was visibly disheartened by the outcome.

A catchweight bout between Duane Ludwig -- a late substitute for injured lightweight champion Josh Thomson -- and Yves Edwards promised explosive stand-up action, but it was work on the ground that made the difference. 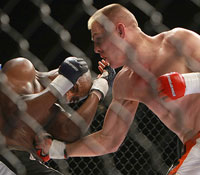 Dave Mandel/Sherdog.com
Duane Ludwig smashes Yves
Edwards with a body shot.
Edwards secured an early takedown with a leg trip against the muay Thai specialist. However, Ludwig demonstrated versatility with the butterfly guard, as he prevented any serious damage and essentially neutralized his opponent. A late smattering of punches from Edwards opened the opportunity for Ludwig to return to his feet at the end of round one.

The second stanza brought dynamic striking from the fighters. Ludwig threw single shots and targeted the body when Edwards unleashed combinations. Another leg trip forced Ludwig to the ground, though he quickly scrambled back to his feet and punished Edwards with stiff body shots. Targeting the liver, Ludwig found his range before he was interrupted by another takedown. Boos rained down from the crowd as Edwards (34-15-1) worked on the ground and the round drew to a close.

Round three saw each the fighters exchange lethargic strikes before more jeers from the audience inspired Ludwig (18-8) to let loose. And while he was double-legged for his trouble, Ludwig found surprising success with his wrestling, as he fended off takedowns and controlled Edwards from top position.

All three judges sided with Ludwig by matching 29-28 counts.

“We’re friends,” said Ludwig, who has won back-to-back fights since his loss to Takanori Gomi in March. “The only way that we were going to take the fight is so we can both have a Christmas for our kids. If I didn’t take the fight, he would have been out; no money for Christmas. We do this for our jobs. This is what we do.”

One-sided fireworks were on display in the night’s lone female fight.

Kim Couture, wife of UFC hall of famer Randy Couture, threw caution to the wind and let her hands fly against Lina Kvokov, who flinched in the face of relentless pressure. Couture (1-1) controlled the clinch and battered the Oregonian across the cage, stalking Kvokov with punches as she backpedaled.

In survival mode from the opening bell, Kvokov (0-2) offered only a handful of punches, many of which missed their mark. She met her end 1:24 into the match, as Couture -- who landed 28 of her 44 strikes -- blasted her out of the cage. The victory was Couture’s first as a professional.

“My hands have been sharp,” Couture said. “They didn’t feel like they were as sharp as they’ve been feeling, but they worked.”

Finally, UFC veteran Joe Riggs made a successful return to the welterweight division, as he stopped Luke Stewart on second-round strikes. 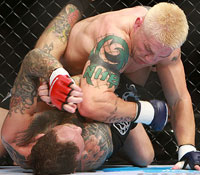 Dave Mandel/Sherdog.com
Joe Riggs tees off
on Luke Stewart.
Early on, Riggs (29-10) appeared to be the more inexperienced of the two, as he could not control the distance against the sharp San Franciscan. After landing a leg kick, Stewart scored with a quick takedown. Despite returning to his feet, Riggs was forced to fend off Stewart from all angles.

Stewart (6-2) continued to close the distance as the second stanza opened, but a takedown forced him to match his guard with Riggs’ heavy ground-and-pound. Experience soon kicked in, as Riggs founds his rhythm and began to unload. Stewart ultimately scrambled to his feet, where a big hook sent the heavily tattooed welterweight to the ground. The end came 2:05 into the second round.