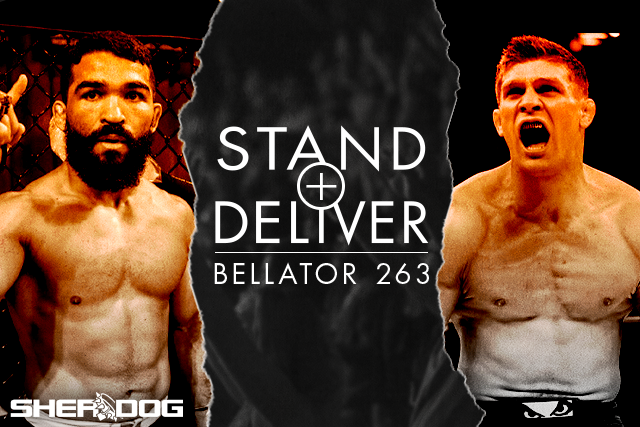 
In some ways, a win is a win and a loss is a loss. But while every fight matters, some definitely feel as though they matter more. In some cases, the reasons are easy to define. Picture the fighter on a losing streak who knows he or she is likely fighting for their job; or conversely, any matchup on Dana White's Contender Series, where two hopefuls know that the brass ring is within their reach if they can win impressively. In other cases, a fight feels especially important for reasons that are harder to quantify, but no less real. Whether it’s the pressure of being a pioneer in MMA from one’s country, or the simple added spice of two fighters who really hate each other’s guts, that fight means just a little more.

This weekend, the biggest thing happening in mixed martial arts is the featherweight headliner of Bellator 263, pitting Bellator MMA two-division champ Patricio Freire against undefeated 17-0 phenom A.J. McKee in the final of the Bellator featherweight grand prix. Given the inherent unpredictability of MMA tournaments, it is cause for celebration that this grand prix actually yielded the championship fight that fans were praying for from the beginning.

The remainder of Saturday’s offering from The Forum in Inglewood, California is strong as well. While justifiable criticism has been lobbed at Bellator in recent years for endless undercards stacked with 1-1 fighters and low-level locals to put rears in seats, the lean, mean 12-fight card of Bellator 263 boasts solid, relevant matchups almost all the way down. Among the prospects and contenders who will look to shine under the bright L.A. lights, some are under just a little extra pressure to perform. Here are three fighters who need to stand and deliver at Bellator 263.

The Spotlight Is On, “Pitbull,” Don’t Slip Now


Elite fighters laboring outside the Ultimate Fighting Championship often face an uphill battle to earn recognition of their accomplishments. It isn’t always fair, but it’s fact. Freire is no exception, but he finally seems to be cresting that hill. One advantage of his former victim Michael Chandler signing with the UFC, lamping a Top 10 contender in Dan Hooker and then coming tantalizingly close to winning the lightweight title is that it has forced a reevaluation of Freire’s body of work. This weekend’s main event slot, with a truly dazzling and intriguing challenger, has received the kind of attention very, very few Bellator fights ever have — at least not for their legitimate competitive value.

Having said that, this fight could be a high-profile disaster for “Pitbull” just as easily as it could be his launching point to a new level of visibility and star power. He checks all the boxes for a fighter in a big matchup to appear in this column: The belt holder? Check. The older fighter? Check. The betting favorite? Yes, but not by much, underscoring just how dangerous McKee is perceived to be. No matter the result of Saturday’s fight, these two seem very likely to fight again, but if Freire loses to McKee, we may well look back on Bellator 263 as a changing-of-the-guard moment, when “Pitbull” lost not only a belt, but the mantle of Bellator’s biggest star and greatest home-grown fighter. He absolutely has more on the line than his young challenger.


Former Bellator lightweight champ Primus has 10 professional victories, the biggest of which by a factor of about 1000 is his title win over Chandler at Bellator 180 in 2017. It’s unfair to call that first-round TKO a fluke. Primus made it happen by committing to throwing leg kicks early and often; many of them landed and one of them rendered Chandler unable to continue. That's a TKO. However, it doesn’t feel like a stretch to say that drop-foot isn’t a replicable path to victory and that Chandler’s five-round smearing of Primus in their rematch is a better indication of what would have happened in a trilogy fight. Primus has won twice more since the second Chandler fight, notching first-round submissions against grotesquely overmatched opponents. It’s led me to wonder what Bellator is doing with the guy; while Chandler is his only top-shelf win, Chandler is also Primus' only loss. Certainly, he’s earned the right to do more than tap out 4-to-1 underdogs on tape-delayed European cards, hasn’t he?

That all changes Saturday, as the 36-year-old Oregonian has staked out a prime spot on the main card of one of Bellator’s biggest and most important events ever, and has drawn an absolute killer of an opponent in the debuting 19-1-1 Islam Mamedov. Mamedov, a former World Series of Fighting/Professional Fighters League standout, is an immediate person of interest in the lightweight title picture, and nearly a -200 favorite over Primus at the moment. If Primus can upset the Dagestani, he’s right back in the title picture himself. If he wants to go down as more than “a pretty good fighter who once made Michael Chandler’s foot go all funny,” he needs to.


Speaking of people who are — or were — seen as immediate title contenders, Porto came over from Invicta FC in April with a four-fight win streak over very solid opposition in tow. In a flyweight division in flux, with longtime champ Ilima-Lei Macfarlane having recently been dethroned by Juliana Velasquez, she had the chance to vault right into the discussion of next title challengers with a win over Liz Carmouche. Instead, she found herself on the wrong end of a clinch-heavy ordeal that never seemed to get out of second gear.

The good news for Porto is that three months later, the division is still wide open and she has the opportunity to get back on track against an opponent who seems tailor-made for her in Ilara Joanne. The not-so-good news is that Porto is 37, so the clock is definitely ticking if she wants a chance to add a Bellator belt to the Invicta hardware in her trophy case.
« Previous The Bottom Line: The Weight of Legacy Next Video: Bellator 263 ‘Pitbull vs. McKee’ Media Day »