On the heels of UFC “Fight for the Troops 2,” we sort through the fallout, pick up the pieces, and bring you the storylines that developed at Fort Hood in Killeen, Texas.

In the fight game, athletes who forever chase their potential make for great stories. When they capitalize on it, that’s the sweetest victory of all. Melvin Guillard’s clinical destruction of Evan Dunham was the personification of that. Guillard’s always shown flashes of rare ability, from his numbing striking to spry takedown defense, but never seemed able to put it together against top competition.

He changed all that Saturday night. Hitting his marks perfectly, “The Young Assassin” stunned the talented Dunham from the opening moments, and exploited every opening en route to a dynamite stoppage.

Fighters notice this. The Melvin Guillard in the Octagon that night was probably the nastiest combination of standup and takedown defense any lightweight will bring today. The jury’s still out on how he’ll hold up when he has to make tactical adjustments in a fight that demands it, but there’s few guys that compete with him on a purely physical level. If Guillard’s mental game progresses as much as the rest of it, he’ll be a title contender soon enough.

Hey, was it just me, or was that middleweight champ Anderson Silva speaking English on the interview segment hyping his Feb. 5 defense against Vitor Belfort at UFC 126?

While Silva answered some questions in English, and others with an overdubbed translator, that was a great crossover moment for “The Spider.” Even a little perfunctory English was fantastic -- it is really the final barrier for any fighter, fair or not, as it allows him to make the leap from being a highlight-reel mystery to a guy that literally speaks your language.

I’ve long wondered why Silva isn’t as lauded -- or at least as recognized and appreciated by casual fans -- and the language barrier was the only explanation. It’s a credit to Silva that he’s willing to make the jump.

Some champions can linger on the other side of the barrier and transcend it through sheer weight of their aura and performances; Robert Duran was an ironic example, as he could speak English but refused to do so, as he didn’t want to do anything poorly. Silva has executed the most impressive run in the history of the UFC, going 12-0. If he keeps this up, maybe we’ll see soccer moms wearing Black House t-shirts. You never know.

Also, never underestimate the endearing quality of a fighter trying out his new language skills. When Georges St. Pierre was noticeably more green just a few years ago, GSP’s remark of “He beat me fairly squarely” about his first loss to Matt Hughes probably won him more fans than any meaningless cliché a fighter has ever uttered.

Have fun with it, Spider. And keep it going. 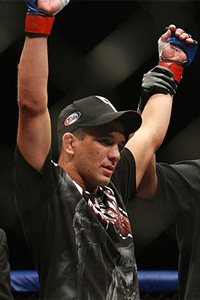 File Photo
Yahya (pictured) shocked Brown.
Seeing Mike Thomas Brown lose via decision to Rani Yahya was eminently baffling, especially when just a year ago Brown was considered the best featherweight in the world. Since losing his crown to Jose Aldo, the man that bested Urijah Faber twice has struggled, going 2-3.

Taking the Yahya bout on a few weeks’ notice after dropping a decision to Diego Nunes at UFC 125, Brown may have been a little flat, and that’s too bad, because stylistically he seemed ideal to defeat Yahya, who has little standup, limited wrestling, and basically is a one-dimensional fighter -- although it’s a helluva dimension.

To his credit, Yahya executed a perfect game plan, circling in herky-jerky fashion to defuse Brown’s big right hand, and executing great transitions in tieups and clinches to get the better of his opponent on the mat, who seemed to tire late in the bout. Brown was a true gamer taking the fight to fill in, but he seemed terribly flat.

We often criticize fighters for not taking bouts for various reasons, but Brown’s performance was a reminder of why fighters have managers, because in a million years it was hard to imagine how Yahya would ever beat him.

One of the best assignments covering this sport are the “Five Matchups to Make” following major events. And in comparing the UFC’s rosters at 155 and 145 pounds, the math suggests that an exodus to 145 is inevitable in the coming year or two.

After the fights are over, your humble columnist scrolls the list of upcoming cards, makes note of available and appropriate/compelling matches and goes from there. What’s interesting are the different landscapes of a given division. In the UFC, the heavyweight roster is thick with elite-level talent, with everyone else seemingly a few notches below, at least in what odds they’d get fighting the top dogs.

Lightweights, meanwhile, resembling the Indy 500, with every lane packed and six-deep with guys jockeying for position. To be blunt: there are simply too many of them to keep, with 70 listed on the active roster. Featherweight, meanwhile, has 29 guys under contract, but only 16 with more than one win. Compared to lightweight, it’s a virtual ghost town.

And the 135-pound division has 22 fighters, which invites further opportunity for feathers at a crossroads once the influx of lightweights begins.

While the Monday-morning cuts from that roster supply a final jolt of post-event newsiness, at lightweight, the competition is simply ruthless. It’s a product of marketability, name value, and size. A heavyweight slugger like Patrick Barry, with proven bonafides, can lose his next two or maybe three fights and probably wouldn’t be let go. Lightweights get no such assurances.

When it could take a solid hour to assemble your list of the UFC’s top twenty 155ers, given how crowded the pool is, the bottom half will no doubt be taking a long look at the scales and the steam room to stay relevant. And when that happens, the domino effect will trickle down to 135.