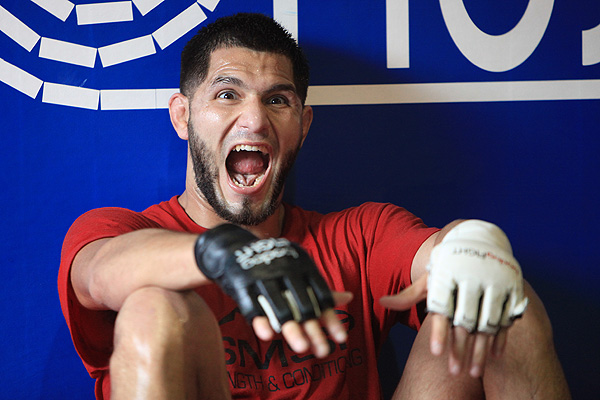 Hello again, Strikeforce. How we have missed your six-sided violence.

In a matter of hours, Zuffa LLC’s second-favorite promotion will descend upon the Rose Garden in Portland, Ore., with a card packing talent from head to toe. Will anybody show up? Absolutely, he said, lying through his teeth. And that is quite a shame, too, because this particular Strikeforce offering is one of the stoutest from top to bottom in recent memory.

The middleweight title headliner between Luke Rockhold and Tim Kennedy will obviously be a good time, but the welterweight championship co-main event is a bit more of a wild card, with Nate Marquardt making his first appearance at 170 pounds against Tyron Woodley. In that vein, all-galaxy jiu-jitsu champ Roger Gracie and heavy-hitter Lorenz Larkin will also make the cut to a new division, dropping to middleweight to take on Keith Jardine and Robbie Lawler, respectively.

Prior to those bouts, however, a mighty fine undercard will warm up the cage. Here are five reasons to tune into Showtime Extreme and watch the Strikeforce “Rockhold vs. Kennedy” prelims:


For my money, there is nothing like a good stocky-versus-wiry matchup.

There is a reason they call Justin Wilcox “The Silverback.” Pound-for-pound, this dude is as ripped as anybody in MMA. Previously a professional bodybuilder, Wilcox rattled off five consecutive wins before taking an accidental finger in the eye courtesy of Gesias Cavalcante last summer, resulting in the bout being ruled a no-contest. Then he was nuked by Caros Fodor in 13 seconds in December, marking his first knockout defeat since 2006.

Meanwhile, Masvidal enters the cage coming off a failed title bid against Gilbert Melendez. Many felt “Gamebred” could have done more in that match against the widely respected champion, which lines up with the Masvidal camp’s claim that he fought through an injured right hand that night.

Six months after their most recent in-cage appearances, which man will erase the memory of his December defeat and reassert himself as a lightweight contender?


Ryan Couture is starting to figure out this MMA thing.

He may fight nothing like his father, but he is one hell of a lot of fun to watch. Couture certainly has not been fighting world beaters, but he has not been kicking around tomato cans, either. Matt Ricehouse, Maka Watson and Conor Heun are all solid guys, and Couture has proved he belongs in the Strikeforce cage based on his skills and not on his last name, as exemplified by the fact that he has looked better with each outing.

Meanwhile, Joe Duarte rides a five-fight winning streak into his clash with MMA’s most famous son, his last loss coming to Carey Vanier under the Bellator Fighting Championships banner in 2010. The Californian signed with Strikeforce last year and has been perfect through two in-cage appearances, submitting Saad Awad and then outpointing UFC veteran Jorge Gurgel in August.

Twice beaten as a pro, Duarte should serve as Couture’s toughest opponent to date. Is he up to the challenge?

From Healy to Hirota

Sherdog.com
Healy's career is respectable.
Likely unknown to most casual observers of the sport, Pat Healy has quietly put together a respectable resume over the course of his nearly 11 years as a professional. The former Maximum Fighting Championship welterweight titleholder has compiled a 4-1 record since joining Strikeforce, with his lone promotional defeat coming to former lightweight champion Josh Thomson in 2010.

Standing across the cage from the Oregonian will be reigning Deep lightweight titlist Mizuto Hirota, who won that championship in his return to competition last summer after having his arm snapped by ex-Dream kingpin Shinya Aoki on New Year’s Eve in 2009. Hirota defended his title in February, taking a unanimous nod over Seichi Ikemoto at Deep 57.

Can Hirota maintain his momentum on his comeback trail, or will Healy make a statement and stake his claim as the No. 1 contender for Melendez’s championship?


For those of you who missed Jordan Mein’s knockout of Evangelista Santos in September, it ruled.

The Canadian prospect put it all together in that fight, withstanding some early offense from “Cyborg” before going toe-to-toe with the Chute Boxe rep midway through the contest. Eventually, Mein’s body attack and volume punching wilted Santos. Pinning the Brazilian against the fence, Mein unloaded with a stream of standing elbows that finished the fight and earned him arguably the biggest victory of his career. Unfortunately for Mein, his six-fight winning streak came to an end in his next appearance, as he was outwrestled by Woodley en route to a unanimous decision defeat.

Now, he must face another stiff test in Tyler Stinson, a 31-fight veteran who owns notable wins over Nate James, Eduardo Pamplona and Drew Fickett. Though the 26-year-old has never been knocked out, five of his eight career defeats have come by submission.

Can Mein take advantage of Stinson’s questionable ground defense, or will the “The Evolution” use his edge in experience to hand the Canadian consecutive losses for the first time in his career?

There Will Be Scrambles


Jason High and Nate Moore may currently stand outside the championship bubble, but both men have a lot to offer in the way of entertainment, especially when they face each other.

At 30 years old, High has been around the block since his 2005 debut. “The Kansas City Bandit” amassed seven consecutive wins to start his career before running into Jay Hieron at Affliction’s second and final event in 2009. High then advanced to the final of Dream’s welterweight grand prix, only to be knocked out by Marius Zaromskis. A one-and-done stint with the UFC signaled the last loss of his career to date, as High has rattled off six straight wins, outwrestling Quinn Mulhern and Todd Moore in his two Strikeforce appearances in 2011.

Representing the highly regarded American Kickboxing Academy, Moore has won three of his last four, his only Strikeforce defeat coming to promising prospect Tarec Saffiedine in 2010. Moore may not possess the same degree of raw athleticism as his upcoming foe, but he has also shown a durability -- remember his last outing against Nathan Coy -- that could serve him well against the formidable test that lies before him.

Can High handle his business and take a solid step toward title contention, or will Moore play spoiler and halt his momentum?