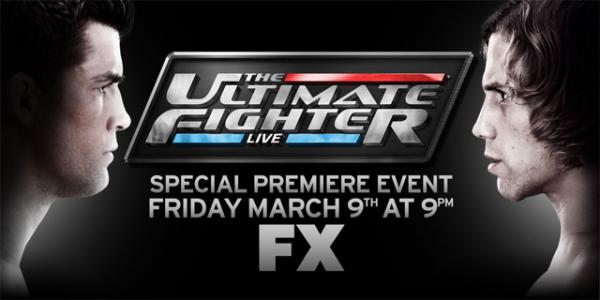 We open “The Ultimate Fighter” Season 15 in the UFC training center with new host Jon Anik, who segues into a brief explanation of the show’s new concept with UFC President Dana White.

The fights are live this year, if you haven’t been paying attention.

The UFC president then announces that half of the prospective residents of the “TUF” house will be going home. More importantly, White reveals that this year’s qualifying matchups will last only one round.

“Make it the best f---ing five minutes of your life,” White says, before announcing that fans will vote online to determine “Knockout of the Season,” “Submission of the Season” and “Fight of the Season,” which all carry with them a $25,000 bonus for the recipients.

White then explains that the season winners (both fighter and coach) will receive a Harley-Davidson motorcycle. It’s just like “The Price is Right,” but with fewer sequins.

It’s time for 32 lightweights to become 16. Joey Proctor and Jordan Rinaldi have been chosen to break in the cage, and the lightweights touch gloves to begin their bout. Both men appear tentative to start, throwing punches and kicks to gauge distance but failing to land.

Like previous installments of the series, there is no play-by-play announcing. Instead, the coaches’ mics are hot, and Dominick Cruz and Urijah Faber chat it up with White from the peanut gallery.

Proctor catches a kick by Rinaldi and rides him to the floor, snatching a guillotine on his seated opponent as Rinaldi attempts to stand. Proctor torques the choke for all he’s worth. Rinaldi squirms and tries to find a way out, but the pressure is too great, and the undefeated prospect taps out. Anik tells us that Proctor -- and any other fighter who earns a finish this evening -- will receive a $5,000 bonus.

Up next, it’s a battle of jiu-jitsu stylists, as former Chute Boxe ace Cristiano Marcello meets Eddie Bravo student Jared Carlsten. Both men hit the ground running, trading low and body kicks before Marcelo hits a trip against the cage and lands in mount. The Brazilian drops elbows on his opponent and forces him to his stomach, cinching a rear-naked choke at 2:43.

Erin Beach and Sam Sicilia are next. The fighters take center cage, and Beach is immediately flattened by a Sicilia overhand right. The Alliance MMA representative tries desperately to recover guard, but referee Josh Rosenthal is pulling Sicilia off of him -- perhaps prematurely. Lasting just eight seconds, the bout marks the quickest finish in the history of the show.

Austin Lyons and Chris Tickle will now square off. Neither man wastes any time getting started, as both launch heavy body kicks and follow with windmilling punches that hit nothing but air. Soon, Tickle finds his mark, dropping Lyons with a colossal right hand that causes Steve Mazzagatti to rescue the South Carolina native, even as he dives for a takedown. It’s another lightning-quick knockout at 24 seconds.

Another transatlantic scrap is upon us, this one between American Brendan Weafer and Brit Andy Ogle. The size difference is immediately apparent as the two take center cage, but despite being the much smaller man, Ogle executes a skillful trip and lands in the American’s guard. Fishing for a triangle, the American tries to roll his foe over, but Ogle’s base is stout. Rosenthal stands them up with 20 seconds left in the fight, and Ogle pulls guard with an arm-in guillotine. Though Weafer refuses to submit, he comes up short on the judges scorecards, and Ogle advances to the round of 16. 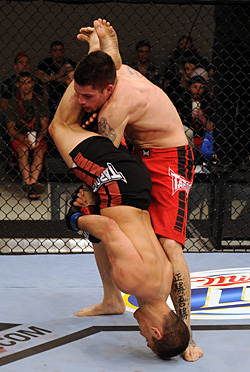 Photo Courtesy: FX Network
Jeff Smith and Jeremy Larsen went at it.
Vinc Pichel and Cody Pfister are now in the cage. After accepting a takedown, Pichel threatens with triangles and omoplatas before using the latter hold to sweep the Texan. Pichel stands, but Pfister takes his back. Unfazed, the Californian dumps him and then repeatedly bashes the 21-year-old with elbows from the guard, lacerating Pfister above his right eye. A geyser of blood spews from Pfister’s head as he gives up his back. Pichel takes full advantage, sinking a rear-naked choke to earn an impressive finish.

Up next is another unarmed Revolutionary War reenactment, as American John Cofer meets Great Britain’s Mark Glover. Cofer comes out southpaw, trying to get inside as he blocks Glover’s long-range kick attack. After they clinch on the cage, Cofer hits multiple takedowns and avoids the Brit’s heaviest strikes en route to a unanimous decision win.

The eighth bout marks the midway point of the qualifying contests. Chase Hackett and Chris Saunders go to work quickly, launching low kicks before Saunders locks up an arm-in guillotine.

He strains to finish the hold, but the mustachioed Hackett stays calm and rides it out. Back on the feet, the mohawked Californian once again turns a takedown attempt into a guillotine choke but can’t finish. Nevertheless, Saunders takes home a unanimous nod from the judges.

James Vick and Dakota Cochrane kick off the second half of the premiere. Cochrane wants no part of the significant height and reach disadvantages and quickly closes the distance. A battle of wills in the clinch ensues, but neither man can gain a true advantage before Rosenthal breaks them. Cochrane tries for another takedown and escapes an anaconda choke attempt to end the round on top. Vick emerges from the fray as the winner by split decision after a seriously competitive bout.

Mike Chiesa and Johnavan Vistante, Jr. are up next. Chiesa immediately hits a takedown, eating a knee for his efforts. Vistante fends off a topside guillotine before giving his back to the Washingtonian, who pounds away methodically before grabbing a rear-naked choke and forcing the 21-year-old to tap out at 2:05.

Yet another international affair is on the agenda, as Floridian Mike Rio takes on Northern Ireland’s Ali Maclean. Rio continually finds a home for his right hand in the opening minute but eventually eats a stiff jab before taking Maclean’s back and finishing his man with a rear-naked choke for the evening’s fifth submission win.

“The” James Krause squares off with 21-year-old Justin Lawrence in the evening’s 12th contest. Lawrence tries a swift hook kick to start and follows with a wild punch combination before putting Krause on his back and dropping a hailstorm of ground-and-pound. Krause kicks him off, but Lawrence’s appetite for destruction is insatiable, turning Krause’s lights out with sharp left hook against the cage.

Drew Dober and Daron Cruickshank are up next. We learn immediately that Cruickshank has a karate background, and he unleashes a blistering combination of punches and kicks before dumping Dober on his back and landing in side control. Following an accidental low blow, Cruickshank drives for a takedown. Dober can’t find the finish he needs from his back and falls on points, granting Cruickshank entry into the “TUF” house.

Coming up next, Jeff Smith takes on Jeremy Larsen. The action is fast-paced from the get-go, as Smith drives the Arizona Combat Sports representative to the mat before Larsen returns the favor. Smith quickly transitions into a toe-hold before switching to a kneebar that nearly coaxes a tap from his foe. Larsen escapes the position and then lands on top, however, escaping a desperation heel hook attempt as the round expires. Larsen is awarded a unanimous decision for his efforts.

Al Iaquinta squares off with Jon Tuck in the penultimate bout of the evening. Iaquinta catches a body kick to start and dumps his opponent, landing directly in a Tuck armbar attempt. Iaquinta powers out of the hold, but Tuck catches his back as he stands. After escaping the position, Iaquinta lands a sharp counter right hand. Tuck glances down at his foot following a kick, and it becomes apparent that he has badly broken his toe. The New Yorker hits a takedown, but nothing can take the attention off of Tuck’s disgustingly disfigured digit. Iaquinta finishes the bout on top, pounding away en route to a unanimous verdict from the judges.

In tonight’s final contest, Akbarh Arreola meets onetime “TUF 13” hopeful Myles Jury, who quickly shoots a takedown and begins to work from the guard, where he would spend the majority of the contest. Dominating the bout with his wrestling and ground-and pound, the American takes the undisputed decision to earn the final bed in the “TUF” house.

Following the 16th bout of the evening, White gathers the fighters on a small stack of bleachers and reminds them of the opportunity that lies ahead.

“You know how much you’ve sacrificed to be here. You know how hard you’ve worked. This is just the beginning,” says White. “You made it into the house. Congratulations, but this is where the hard work begins. Get ready for the hardest 13 weeks of your life.”