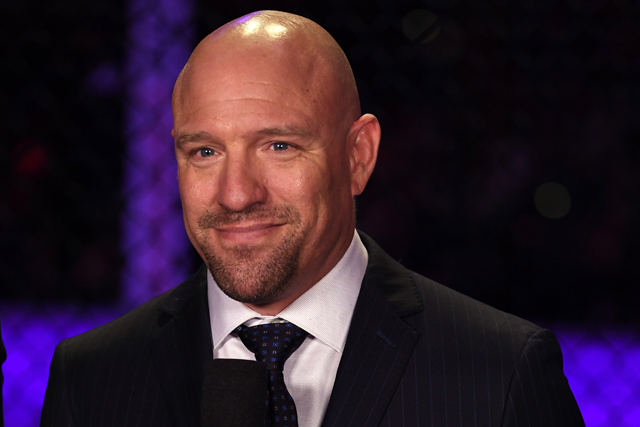 It came as a surprise to many when commentator Jimmy Smith announced on Twitter that he would no longer be calling fights cageside for the UFC. By most accounts, Smith was somewhere between good and exemplary in his role. He is experienced in combat sports, possesses a clear and professional voice and also conveys genuine, intelligent enthusiasm for the sport. So why was he let go?

“[The UFC told me] you’re great, fantastic, we love everything you did,” he said in an interview with MMAFighting.com, “[but] we’re going with UFC fighters for 2019.”

This is a perfectly reasonable decision on behalf of the Ultimate Fighting Championship. This isn’t exactly a change so much as it’s a pivot into something it has already been doing -- and doing successfully. However, if the UFC plans on only putting fighters in the booth, it begs the question of whether or not fighting experience makes someone better for commentating.

Of course, there will always be at least one non-fighter calling fights: Joe Rogan. He occupies a unique spot in the company. He has a long history with the sport and the UFC specifically, and even though he has never fought professionally, his knowledge of martial arts is deep and legitimate. Besides being learned, he’s also one of the most generally famous people attached to MMA. Outside of the sport’s megastars, you’d be hard-pressed to find a more recognizable face in the promotion. This is to say nothing of his talent, and it should be noted that he is exceptional at his job. Suffice to say, Rogan has carved out a very specific niche, and as a result, he is not terribly instructive for the broader discussion of what makes a commentator competent.

There are some obvious advantages to the UFC leveraging its roster for commentary duties. For starters, it’s an additional potential revenue stream for fighters, and lord knows they could use as much help as they can get in that department. It could even become a second career path after a fighter retires. It’s a limited opportunity, in scope as well as magnitude, but it’s an opportunity nonetheless, and I will always support things that are good for the athletes. While I’d like to see the UFC provide for fighters across the board through higher purses, assurance of payment if an opponent falls out and health coverage, this isn’t a bad supplement to those things. Even if commentating is insufficient on its own, it isn’t nothing, either.

With that being said, a potential drawback to this sort of vertical integration is that it could easily be held over fighters’ heads. There are only so many openings available, and it is well within the realm of possibility that the UFC will use this as incentive to play ball. If, for example, Paul Felder pulls out of a fight and draws public ire from the head honchos, would anyone be surprised to see his commentary duties reduced? This is speculative, of course, but it is worth considering given the UFC’s track record of blurring the lines between incentivization and exploitation.

Yet there are nuances to the fight game that only someone who has actually been in the cage can accurately illuminate. Fighters have unique insight to share, especially as it pertains to the technical points of combat. Dominick Cruz is one of the best at this. In the Daniel Cormier-Stipe Miocic fight, he detailed the specific mechanics of how Cormier set up the fight-finishing blow, explaining how Cormier deftly moved from an overhook to an underhook to create enough distance for the overhand to connect. Compare that to Rogan’s analysis: “They’re in the clinch, (Cormier) breaks free [and] bam, on the chin! Stipe goes down, boom, boom, boom, out cold. Crazy!” That’s not to disparage Rogan; he communicates the inner-monologue of the average fight fan better than anyone, which is exactly what he did there. It’s just that Cruz has a deeper level of understanding since he’s actually been in the cage.

Experience has its downsides, too. Fighters bring their own allegiances and biases into the commentary booth that can sour the spectator experience. Plus, non-fighters can be better at explaining what is happening because they are fans, so they communicate a fan’s perspective more naturally. When I was in college, I had two physics professors. One had won nearly every physics prize aside from the Nobel; the other was a regular old PhD, with all the attendant work experience and scholarly articles you’d expect. The former was unquestionably a genius but did not make for a good teacher at all, whereas the latter was far better at breaking down concepts and communicating complex ideas clearly. Both were experts, and even though one was on a much higher tier of expertise, it did not bequeath him with a superior communicative ability. Sometimes distance is clarifying.

It’s no easy task to commentate well, and often the job is only noticed when it’s done poorly. It’s an important gig, though, and one that the UFC should not take lightly. I’m all for having fighters in the booth, but I’m wary of the implications of Smith’s dismissal. The best lineups tend to include fighters and regular folk alike. Hopefully that is understood by the UFC brass.

Eric Stinton is a writer and a teacher from Kailua, Hawaii. He has been writing for Sherdog since 2014 and has published fiction, nonfiction and journalism in Bamboo Ridge, The Classical, Eastlit, Harvard Review Online, Honolulu Civil Beat and Vice, among others. He currently lives with his fiancée and dachshund in Seoul. You can find his work at ericstinton.com.