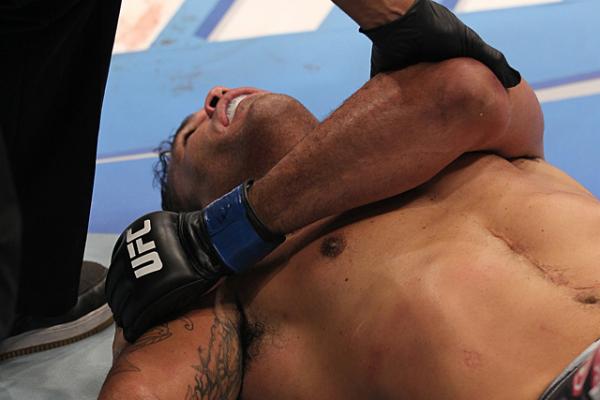 Injuries are part of any contact sport. | Photo: Nick Laham/Zuffa/UFC/Getty


Weird nicknames are all well and good, but after a couple weeks of discussing those, it’s time to get back to what this column is really about: weird results.

Bearing in mind that it sometimes takes weeks or months for results to trickle in -- shamefully, we don’t yet have Christine Stanley’s killer knockout recorded -- what follows is a sampling of August’s most unusual Fight Finder entries, along with a few related tangents.

• Ben Saunders got people talking last Saturday with his omoplata finish of Chris Heatherly at UFC Fight Night “Henderson vs. Dos Anjos,” and while Saunders was the first man to hit the armlock inside the Octagon, he wasn’t the only fighter to land it that night. Colorado-based flyweight “Quick” Nick Honstein forced New Yorker Darren Mima to submit to an omoplata at 2:14 of round one in the co-main event of CFFC 40 in King of Prussia, Pa.

• Welcome to the Twister Club, Jay Bogan. The featherweight from Fullerton, Calif., tapped Marcos Bonilla with a 97-second twister on Aug. 10, joining the likes of Chan Sung Jung and Shuichiro Katsumura in securing one of MMA’s rarest and most beloved submissions. Coincidentally, the same event featured Marina Shafir, a “Four Horsewomen” stablemate of Shayna Baszler, who recorded the first twister in women’s MMA back in 2008.

• While we’re talking tap-outs, one question that comes up frequently is the distinction between a “submission” and a “technical submission.” A standard, run-of-the-mill submission is easy to spot: it’s when a fighter surrenders by tapping or verbally signalling to the referee by saying something like “tap.” Some commissions and databases will specify a “verbal submission” in the latter case, but we don’t bother with the distinction in the Fight Finder because, frankly, it doesn’t matter.

A technical submission occurs when a referee stops a fight without capitulation from the losing fighter, and it can come about in a few different ways. The most common cause of a technical submission is a fighter falling unconscious while caught in a choke, as was the case when Marcin Tybura put Damian Grabowski to sleep at M-1 Challenge 50 on Aug. 15. The other, more controversial version of a technical submission was on display the following day at Cage Warriors 70, where referee Peter Lavery halted a fight after Catherine Costigan caught Noelia Molina in an armbar. While that appeared to be a questionable call, some pain-based technical submissions are undeniable, like when ref Herb Dean had to rescue Antonio Rodrigo Nogueira and his snapped arm from a Frank Mir kimura at UFC 140.

• Sometimes the most curious part of a fight isn’t even reflected in its Fight Finder entry. Take, for example, the Aug. 8 bout between Jad Rihan and Phillip Steck at Primetime MMA in Toledo, Ohio, where Rihan earned a second-round technical knockout. But that wasn’t all he earned: according to the Ohio Athletic Commission, Rihan was issued a 180-day suspension due to “unsportsmanlike conduct for spitting water on an official.”

• At CES MMA 25 on Aug. 8, lightweight Jay Bakanowski got a bizarre win via TKO after one round when his opponent, Keenan Raymond, slipped off his stool in the corner and suffered an ankle injury. The slip was extra unfortunate for Raymond, who by all accounts had won the opening round .

• Following in the grand tradition of Bellator MMA “postlims” -- those sometimes-scheduled, sometimes-swing bouts that take place after a show’s headliner -- old-school Japanese organization Pancrase this month began scheduling its Neo-Blood rookie tournament fights after its main cards. So, if you come across an event like Pancrase 260, where a number of novice fighters appear to headline over their better-known counterparts, just know that cards aren’t always as they seem. The problem is that we don’t get to assign “main event” status in the Fight Finder; whichever fight happens last automatically gets that designation.

• Finally, in news to make you feel old: there are now fighters being added to the database who were born after the turn of the century. Kids and preteens have been competing in MMA for a minute, but this particular gut-punch came to me in the form of young Tiago Albuquerque dos Santos (born Sept. 24, 2000), who won his amateur debut Aug. 16 at Warrior Challenge 6 in Itapema, Brazil.

Ages aren’t just dropping in amateur MMA, either. If you thought Jordan Mein turning pro at 16 was wild, get a load of Rickson Thai Zenidim Bueno, a 15-year-old Brazilian strawweight from a fighting family who already holds a professional record of 4-0. Now, if you’ll excuse me, I have to go ice my knee and think about what I’ve done with my life.

Chris Nelson is an associate editor for Sherdog.com. Email him at [email protected] with your Fight Finder-related queries.
« Previous The FF-Files: On Baraos and Zuluzinhos Next The FF-Files: A Brief Tutorial »