On Fight Finder, we’ve seen things you people wouldn’t believe. Fledgling federations on fire off the shoulder of Omsk. We watched gold-plated trophies glitter in the dark near the Tyumen Gate. All those moments would be lost in time, but not any longer. To celebrate 2020 being behind us, we would like to share some of the seemingly unbelievable claims that Sherdog Fight Finder received this past year, even while much of the MMA community was on pause and regional events thinned to a trickle.

As we mentioned in the FF-Files Reintroduction piece, we receive a plethora of daily emails requesting updates and submitting new information. New Year’s Day, a holiday around the world, saw a clean dozen requests sent our way, and the final one we received started the year off right.

The submitter, claiming to be the promoter or organizer of an event, sent the full event’s worth of fight results…with one fake fight added in. This happens more often than you would think: Someone with a vested interest in a fighter sends in the results of an event, sneaking in a fake win for their fighter, assuming our staff will gloss over it and simply add the fake fight along with the real ones. This was not the case, as our Fight Finder team reviewed the full event video in its native language, verifying that 10, not 11, matches took place on the card. How did the submitter respond when called on his obvious falsehood? “Dude are you out of your mind?”

That is just the tip of the iceberg when it comes to bad submissions to Fight Finder. It is extremely disappointing to receive these kinds of requests, because this community should be built on trust and trying to make the sport better as a whole. Instead, on a sadly regular basis, we receive results that are so clearly false that it practically defies description. It should be noted that sending in fake results is actually unlawful, as it is an attempt to fraudulently misrepresent a fighter to potential promoters. Imagine if the Ultimate Fighting Championship found out one of its new hot prospects was actually 7-4 and not 9-0 — this would be a significant problem.

It is time to show off some of these falsehoods. The identities of the fighters have been redacted – it is possible these requests were sent in not at the behest of the fighter but rather from an unscrupulous manager or unwise countryman – but the rest is exactly as we received it.

One spectacular request came at the behest of a burgeoning 20-year-old from Russia, with the claim that he won a fight in December 2019, and a year after it happened, his team came up with the information to verify it. The submitter, who did not identify themselves in the email, attached information including a poster that looked to be created in MS Paint, and the “judicial notes” verifying his win from an event in China. 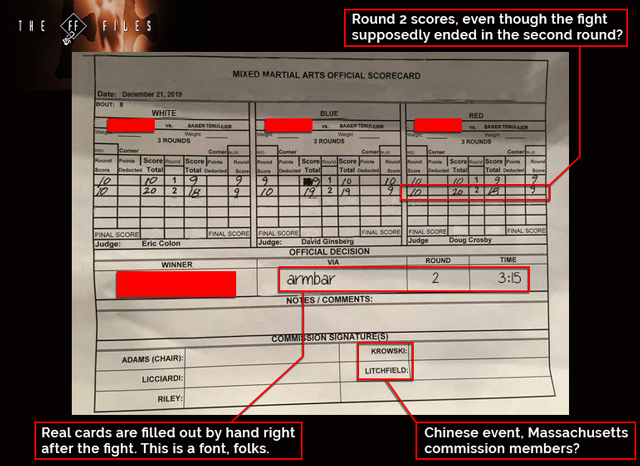 
As you can see, the above image is a clear forgery. The person responsible snagged a scorecard from a UFC fight — specifically Cathal Pendred vs. Sean Spencer from UFC Fight Night 59 in January 2015 — then tried to doctor it up. The editing is laughable, as is the notion that big-show mainstay judges Eric Colon, David Ginsberg and Doug Crosby would travel to China to score a small event four days before Christmas 2019. The editor also removed only some of the round scores, leaving in errant marks as well as the Round 2 tallies even though the fight allegedly ended at the 3:15 mark. Also note the stellar font choice for the official result that is typically handwritten.

Put simply, don’t do this. If you send something like this to Sherdog Fight Finder, you are fast-tracking your fighter to the danger zone. We can’t trust anything else you send in when you commit fraud in your first introduction to the Fight Finder staff. As a result of this edited document – the submitter later admitted they created this ill-fated work of fiction – the fighter’s Fight Finder profile has been marked to indicate that they or their representatives attempted to commit fraud by submitting forged documents. We do not take this step lightly, but we take a zero-tolerance stance toward forgery and fraud. 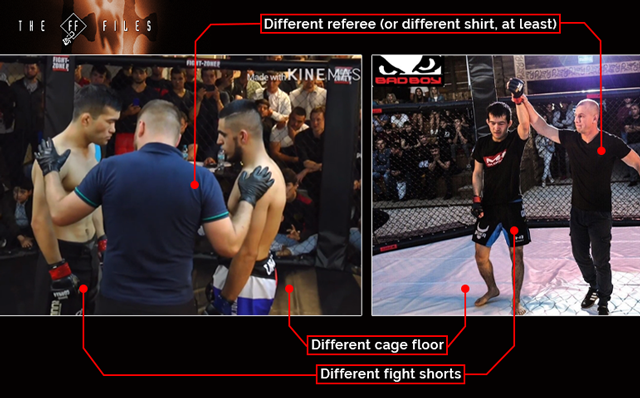 
This image composite is an example of something we see regularly in requests. Someone will send in a snippet of a video showing their fighter walking around in the cage without including the full fight, along with an accompanying photograph of the winner getting his or her hand raised. In this example, the screenshot of the video on the left and a photograph on the right, shows just how ludicrous these submissions can be.

It should go without saying that the photograph and the video are not remotely the same fight, and the fight they submitted with this information cannot be added to the database. Note the cage floor, the referee, the cage, the fight shorts — basically everything about this is wrong, and yet the person who submitted this information held fast after being challenged on these results, claiming that the Fight Finder staff was “picking holes in [his] fighter’s match.” 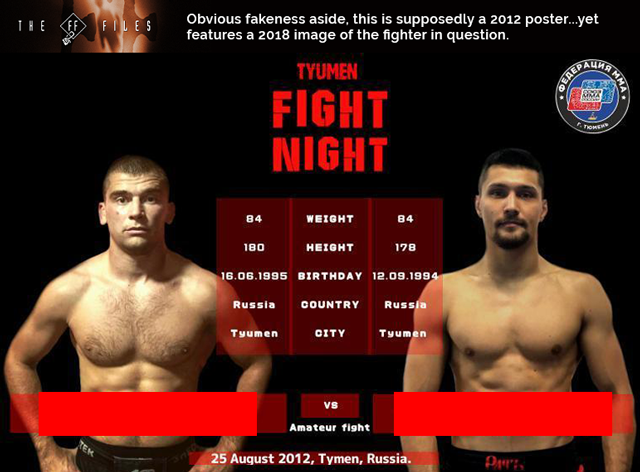 
The last example we will provide here is a falsified fight poster, made well after the fact to try to verify a claim. This bout took place in 2012, at an event containing four pro MMA fights, including one that legitimately ended by cartwheel kick knockout. The issue here is that the submitter, many years after the ink dried for the event, tried to get the fight reclassified from professional to amateur, thereby removing a defeat from his fighter’s pro record.

To prove that the bout was amateur, the person involved – typically a manager or agent, but sometimes a teammate or coach – created this fiction of a fight poster from a regional Russian event in 2012…in English. All the while, the creator pasted in a hastily copied logo of the Union of MMA in Russia, a major federation that oversees events, to try to prove that the poster is an official creation from said federation. Both fighters would have been 17 years old at the time of this poster’s making, had it been contemporaneous. This is not proof of anything other than mediocre Photoshop skills.

This article will be the first of many, documenting fraudulent submissions sent to the Fight Finder staff over the course of 2020. Some upcoming cases can hardly be believed, and we will go into plenty of other examples, like the age-old claim that one fighter did not compete on the card and in fact it was his father’s brother’s nephew’s cousin’s former roommate that fought in his place. There are many more stories to tell.