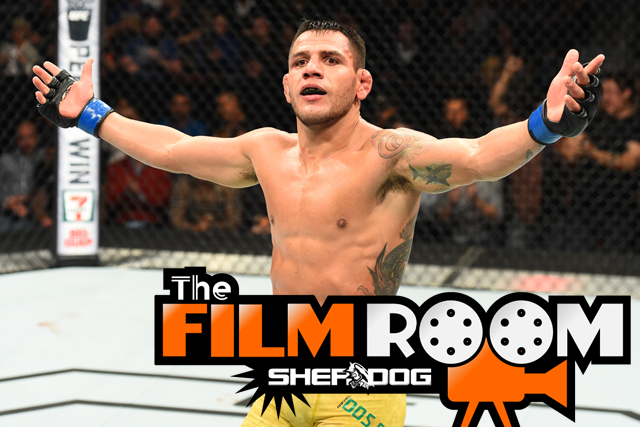 
Rafael dos Anjos will step inside the Octagon for the 26th time Friday when he takes on surging contender Kamaru Usman in the “The Ultimate Fighter 28” Finale headliner. Dos Anjos resurrected his career since moving to welterweight in 2017 and is now looking to get back in the title picture with a win over the highly-touted Usman.

It’s rare to see a fighter age like a fine wine, but Dos Anjos has done just that. Early in his career, Dos Anjos was a linear submission specialist with decent takedowns and a wild overhand left. These days he is one of the trickiest pressure strikers in the game and always has his grappling background to rely on if he’s not finding success on the feet. Dos Anjos has always been a pressuring striker, but working with Rafael Cordeiro and now Jason Parillo allowed him to perfect his ability to back opponents to the cage and unload furious combos to the head and body.

But his pressuring style doesn't mean he is always the leading attacker. Dos Anjos is also adept at using his pressure to fluster opponents and force them to strike first, where he steps back and counters before pressuring them back to the fencing.

Since his style relies on backing the opponent to the cage and limiting their movement, Dos Anjos intelligently invests in chopping down the legs to slow down their lateral movement. Leg kicks are a strike every fighter uses, but they are rarely seen as game-changing. For Dos Anjos, some of his best performances came when he actively attacked the legs and some of his worst performances came when he abandoned the low kicks and allowed opponents to move off the fence.

Although most of his success on the feet comes from pressuring opponents to the cage, he can also have success striking at a distance in the center of the Octagon. When striking on the outside, his go-to is a ripping kick to the body from the rear leg, which he throws with almost no wind-up and can be difficult to see coming. Against Anthony Pettis, he used these body kicks to set up his right hook, which had Pettis backing himself up to the cage every time.

Since Dos Anjos has become known for his striking later in his career, many forget how accomplished he is on the ground. He has been training jiu-jitsu since he was 9 years-old and is a third-degree black belt under Aldo “Caveirinha” Januario. He also has three more submission victories than knockouts in his career, despite having more knockouts than submissions in the UFC. Against Neil Magny, he looked to get the fight to the ground early and finished him with an arm triangle in the first round, earning his first submission victory since 2012 and showing fans that he can rely on his grappling background when needed.