Introducing “The Throwback.” The Throwback is a column where all you youngsters get to finally put that Fight Pass subscription to good use. We take a look at what is happening in mixed martial arts now and see how it relates to the past.

This marked a first for Jones in that it was the first time a cageside judge awarded the fight to his opponent. It was only one judge and Jones still managed to win the split decision. This opened up some criticism of the controversial fighter, who is widely regarded as the greatest of all time. The criticism of Jones’ performance was that it didn’t meet his lofty benchmark and he was fighting not to lose, rather than to win. In his post-fight interviews, he defended the strategy based on how dangerous Santos is and said he was just trying to get the victory. This led The Throwback to wonder: Is Jones regressing or is this just what champs do? There are only so many fighters who have defended their title as many times as Jones has, so lets take a look at their championship runs. 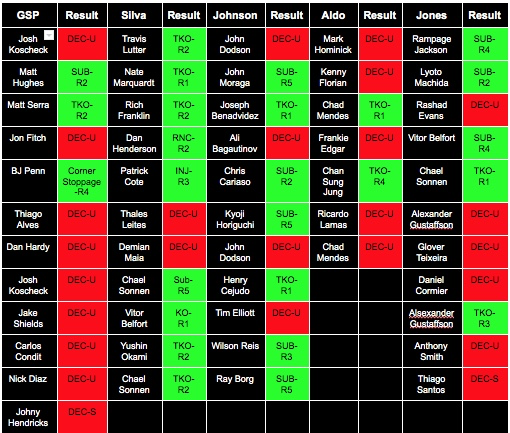 Important notes
All of Georges St. Pierre’s title defenses came after Matt Serra took his belt and it was regained in the rematch. This is relevant because it is widely believed that St. Pierre was a much more cautious fighter after the Serra loss.

In many ways, Chael Sonnen rejuvenated Anderson Silva’s career at 185. Prior to the first their first encounter, Silva had seemed very disconnected in and out of the cage. He did have the Forrest Griffin bout at light heavyweight when he went into the Matrix, but that was followed up by Demian Maia, when Dana White threatened to cut him.

The second Daniel Cormier fight against Jones is omitted because it was ruled a no contest. That may have tainted Jones’ finish-to-decision ratio a little differently, but he does seem to be on quite a run of decisions. Not quite St. Pierre-esque but he’s no Silva or Johnson either.

A lot has been made about Nunes being the greatest female fighter of all time. It’s something that is hard to argue based on her victories over Ronda Rousey and Cristiane Justino, the two women who were previously dubbed greatest of all time. Both Rousey and Nunes have six victories in championship fights -- yes, we know the "Cyborg" fight was at 145. While there is little dispute as to who the GOAT is, there may be some dispute as to who the more dominant champion was. Here are their championship runs, side by side. Let the debate begin.

At 5 seconds, Masvidal supplants Duane Ludwig as owner of the fastest knockout in UFC history. Ludwig’s KO of Jonathan Goulet at UFC Fight Night 3 was 6 seconds.

The way that Masvidal knocked Askren out cold and then threw the “super necessary” follow-up shots, mixed with the bad blood that went into them, was very reminiscent of Dan Henderson and newly-minted hall of famer Michael Bisping’s fight at UFC 100. Bisping tormented and just generally annoyed Henderson during the filming of “The Ultimate Fighter” and the subsequent promotion leading up to the fight. Karma being what it is, Henderson dropped the "H-bomb" and then followed it up with a punch so iconic, he made it his logo. These finishes ring true because of the amount of fans that felt that those on the receiving end of the shots, Bisping and Askren respectively, deserved them. Bisping described himself during that time in his hall of fame speech as a “proper d---head” and Askren has said he probably deserved what he got. The fight game, as always, remains unforgiving.

Many viewed Saturday’s match between Chiesa and Sanchez as a fight where careers were going in opposite directions: Chiesa making his way toward the Top 10 of the welterweight division and Sanchez moving closer to laying his gloves on the canvas. However, the historical narrative of this contest is that it was the 20th time ‘TUF’ alumni have fought each other. Here is a list of the other 19.

STRIKEFORCE BE WITH YOU

The end of Melendez and Rockhold’s careers seem more imminent these days. That said, The Throwback wanted to take a moment to remind everyone of when they were under the Strikeforce banner and having much better nights.

Melendez was the more successful Strikeforce fighter. He was the lightweight champion and his run of title defenses included wins over Josh Thomson (twice), Shinya Aoki, Tatsuya Kawajiri and Jorge Masvidal.

Rockhold certainly has had a much more impressive UFC career but he did pick up some hardware in San Jose. He took the Strikeforce 185-pound belt off Ronaldo Souza and defended it twice. He defeated Keith Jardine by knockout and then Tim Kennedy by unanimous decision.