Barely over a year into her reign, Valentina Shevchenko can make a solid case as the most dominant divisional champ in the Ultimate Fighting Championship.

With her third-round destruction of Katlyn Chookagian at UFC 247 last Saturday, “Bullet” notched her third successful title defense, tying her with UFC 247 headliner Jon Jones for the second-longest active title reign in the promotion. Beyond simply securing her place atop the division, Shevchenko has put a stranglehold on it, as all five of her fights at flyweight have been lopsided thrashings.

While Shevchenko’s title run has imposed order on a previously chaotic division, she is coming perilously close to running out of viable challengers; with up-and-comer Maycee Barber suffering an ACL tear in her loss to Roxanne Modafferi last month, the “Future” appears to be on hold, leaving veterans such as Modafferi, Joanne Calderwood and fellow UFC 247 winner Lauren Murphy at the front of the queue. While all three are accomplished women, all would be prohibitive underdogs against Shevchenko, likely extending a mind-boggling streak in which the champ has been a 10-to-1 or greater favorite in all of her title defenses so far.

With the other most dominant flyweight in the world, Ilima-Lei Macfarlane, having freshly signed a long-term deal with Bellator MMA, and with the UFC bantamweight belt in the care of a woman who has already beaten Shevchenko twice in Amanda Nunes, there may not be much for the 31-year-old to do but stay where she is and continue to destroy all comers for the time being. 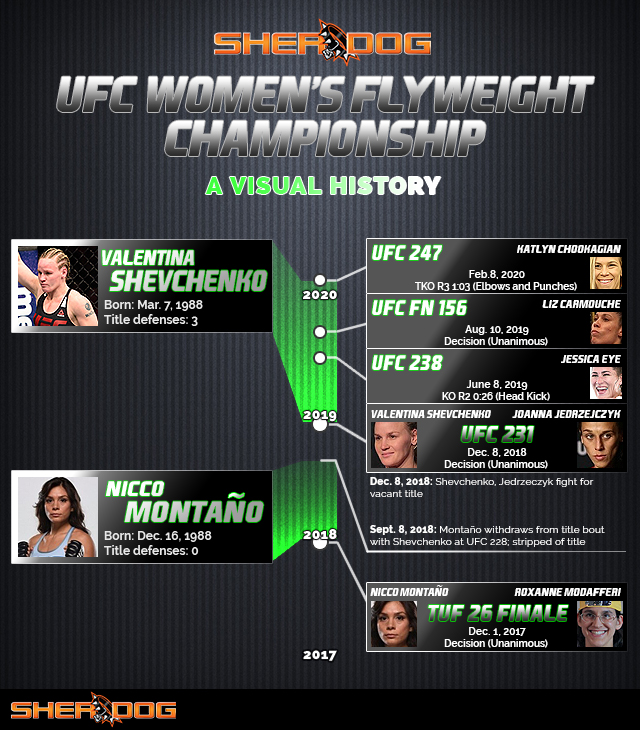