Sign up for ESPN+ right here, and you can then stream UFC 255 live on your smart TV, computer, phone, tablet or streaming device via the ESPN app.

At UFC 255 this weekend, Valentina Shevchenko will attempt to further her case as the top pound-for-pound woman in the sport.

A good case can already be made that “Bullet” is the most dominant divisional champion of either gender in major MMA. In the nearly two years since Shevchenko won the vacant flyweight title in a one-sided showdown with former strawweight queen Joanna Jedrzejczyk, she has defended her title three times. Each time, she has been a 10-to-1 or greater favorite over a dangerous veteran opponent, and while the lines may shift in the days before her scheduled title defense against Jennifer Maia in Saturday’s co-main event, it is currently on track to be the most lopsided title fight in Ultimate Fighting Championship history.

Shevchenko, of course, is an ice-cold professional who has shown no sign whatsoever of looking past any of her challengers so far. On the other hand, we who watch her work are under no such obligation, and “What’s next for Valentina?” is an increasingly tricky question, as the UFC women’s flyweight division is running out of contenders she hasn’t already beaten badly. However, hope may be coming in the form of recent strawweight transplants Cynthia Calvillo, who will face off with former title challenger Katlyn Chookagian on the main card of UFC 255, and former strawweight champ Jessica Andrade, who crushed Chookagian at UFC Fight Night 180 last month.

Here is the history of the UFC women’s flyweight title and the times it was won, lost or defended. It tells the story of a division that stumbled out of the gate but has become a conveyor belt, feeding challengers to a champion who has been knocking them off with brutal efficiency, almost faster than the promotion can find them. 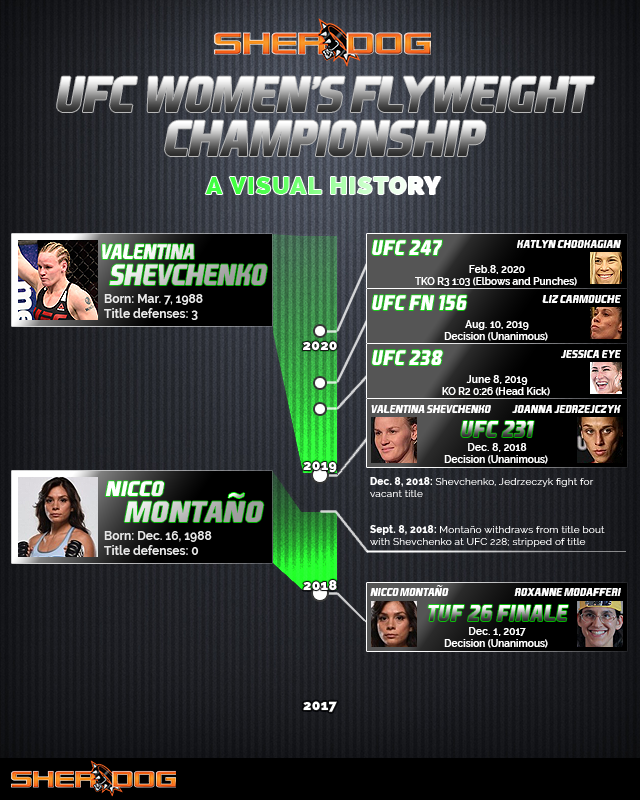