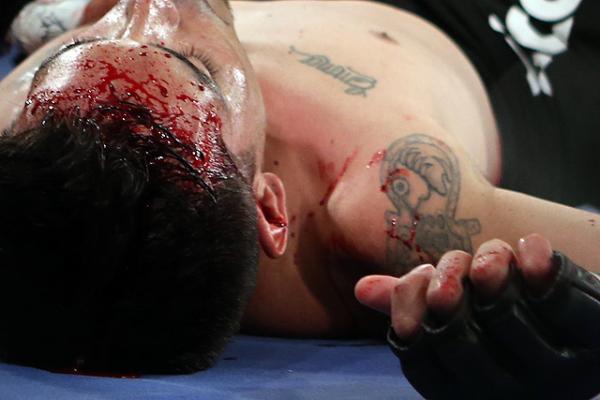 Constant offensive pressure coupled with a mantra from California rock band the Red Hot Chili Peppers were two of the main ingredients in T.J. Dillashaw’s upset win on Saturday at the MGM Grand Garden Arena in Las Vegas.

Walking into the UFC 173 main event, Dillashaw was a heavy underdog to defending bantamweight champion Renan Barao. At the end of the night, there was no question that Dillashaw was the best 135-pound fighter in the world.

Coming into the UFC 173 headliner on the strength of five wins in his previous six appearances, Dillashaw needed a game plan to crack the code of Barao’s 22-fight winning streak. The Red Hot Chili Peppers’ “Can’t Stop” is a song about harnessing a person’s inner personal energy. Between rounds of his bantamweight title fight, Dillashaw and coaches at Team Alpha Male subconsciously knew the best path to victory was an inability to stop.

Dillashaw would not be stopped, and deep into the championship rounds of his first title fight, the 28-year-old bantamweight’s game plan allowed him to silence every one of his critics.

MMA fighters care not for summer love flings, but any cage fighter worth his salt had to be envious of Barao’s impressive nine-year tear.

Like cracking open a good intro guitar riff, Dillashaw set the tone for his title fight with Barao in the opening round. A wrestler by trade, Dillashaw nailed Barao with an uppercut before a red-hot right hand to the chin sent the Brazilian champion firmly to his back. The final two rounds saw Dillashaw continue his striking onslaught on Barao, as head kicks hit their mark and a left hand dropped the Nova Unaio product back to the canvas. The fight came to a close in the fifth round after Dillashaw beat on a grounded Barao until referee Herb Dean waved off the fight in favor of the new UFC bantamweight champion.

The co-main event of UFC 173 was not a changing of the guard; it was a highlight reel scoop slam of the guard in the UFC’s light heavyweight division. In his second fight at 205 pounds, Daniel Cormier looked quicker and more powerful than ever. For future hall of famer Dan Henderson, the fight with Cormier quickly turned into a game of survival.

Louisiana rapper Lil Wayne’s 2010 track “Right Above It” has become the unofficial anthem for Cormier throughout his UFC run. “Right Above It” is off the album “I Am Not a Human Being,” and inside the cage, Cormier’s body appears to have been programmed to do unhuman-like things. Rebooted and updated in a sleek 205-pound model, Cormier has retained all of his heavyweight power while improving on his high-level, fast-twitch grappling skills.

There was no need for a Las Vegas crowd-led “USA, USA, USA” chant, but Henderson’s walkout choice still reflected his love for the red, white and blue. Off his 2011 album “Clancy’s Tavern,” country singer Toby Keith’s “Made in America” is another patriotic song from the Oklahoma-born lyricist. Both “Hendo” and Cormier were made in America, so Henderson’s walkout song had little psychological effect on the outcome of their bout.

For the first 10 minutes of their fight, Cormier dragged Henderson through a clinic of MMA offense. Up two rounds to none, Cormier put Henderson to sleep with a rear-naked choke submission midway through the final frame. No matter what weight class Cormier competes in, the 35-year-old two-time Olympian has proven to be “right above” his competition and remains perfect at 15-0.

On the undercard, lightweights Tony Ferguson and Katsunori Kikuno battled, not only inside the cage but on the Billboard charts from 1985.

Born in 1984, Ferguson’s love for hip hop and break beats may have begun in the womb. Ferguson stepped out to the classic jam “The Party Has Begun” by Freestyle, while Kikuno countered with a passion of his own: group sing-a-longs and charitable causes. However, the 1980s all-star team of singing talent collectively known as USA for Africa’s “We Are The World” was not enough to carry Kikuno to an upset win over Ferguson. The California lightweight’s party began early and often, until Ferguson put away Kikuno with a brutal punch at the 4:06 mark of round one.