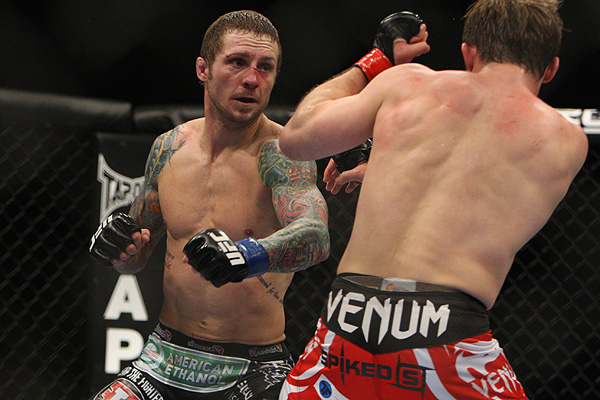 Eddie Wineland has compiled a 7-4 mark in the WEC and UFC. | Photo: Dave Mandel/Sherdog.com

Channeling his inner Han Solo, Wineland will challenge Renan Barao for his Ultimate Fighting Championship interim bantamweight crown in the UFC 165 co-main event on Saturday at the Air Canada Centre in Toronto. With Barao installed as a significant favorite, the Duneland Vale Tudo representative embraces the opportunity to prove naysayers wrong.

“I don’t mind being the underdog. Big deal,” Wineland said in a pre-fight interview with UFC.com. “You put your money on the other guy, [and] you’re going to lose it. I’m going to put my right hand on his chin, and he’s going to fall down.”

A former World Extreme Cagefighting champion, Wineland has recorded six wins in his last eight appearances. The 29-year-old firefighter has enjoyed something of a rebirth since arriving in the UFC, even though he lost his first two fights inside the Octagon to Team Alpha Male thoroughbreds Urijah Faber and Joseph Benavidez. Back-to-back wins over Scott Jorgensen and American Top Team’s Brad Pickett made Wineland the No. 1 contender at 135 pounds. Known for his aggressive standup, unshakable resolve and a willingness to engage in shootouts, he has delivered 10 of his 20 career victories by knockout or technical knockout.

“I would say I’m a straightforward boxer, but I’m really not,” Wineland said. “I think he’s going to see my angles and say, ‘What the hell is going on here?’ He’s not going to be able to find me. If you can’t find somebody to hit or kick them, it kind of nullifies your striking.”

Barao will enter the cage having rattled off 20 consecutive wins since his December 2007 bout with Claudemir Souza resulted in a no-contest. The 26-year-old Nova Uniao export last appeared at UFC on Fuel TV 7 in February, when he submitted Michael McDonald with a fourth-round arm-triangle choke at Wembley Arena in London. Though Barao has not tasted defeat in more than eight years, Wineland believes he has the advantage in at least one area. 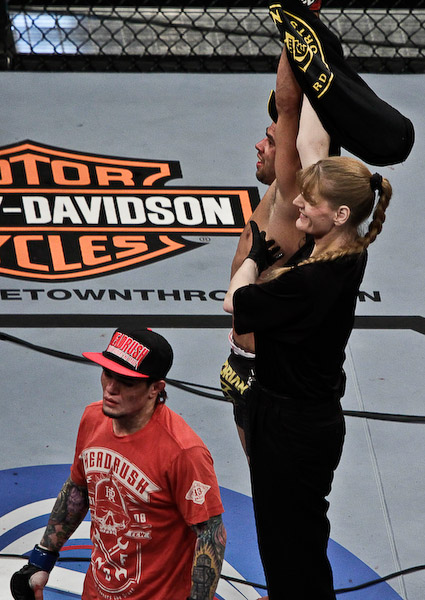 Photo: Sherdog.com
Barao last lost in 2005.
“I’m not concerned at all with his quickness or his speed,” he said.

“I feel I’m the faster and stronger fighter, so if I’m faster, his speed shouldn’t be a concern.”

While Wineland has fought beyond three rounds only once -- he lost a unanimous decision to Chase Beebe in 2007 -- he has put a premium on stamina ahead of his showdown with Barao.

“Conditioning to me is, I’d like to say, the majority of the fight,” he said. “If I can be stronger than you for those 15 or 25 minutes, you’re going to have a hard time doing what you want to me. If I can outlast you and I can tire you out -- and I’m not tired -- well, now I have free range to do whatever I want. To me, to wear somebody out and to break them mentally, to break them physically, that’s why I push myself so hard on the conditioning side of things.”


The Air Canada Centre opened on Feb. 19, 1999, at a cost of $265 million and serves as the home arena for the NHL’s Toronto Maple Leafs and the NBA’s Toronto Raptors ... During his six-fight winning streak, Alliance MMA’s Alexander Gustafsson has landed more than twice as many significant strikes (227) as his opponents (114) ... “The Ultimate Fighter” Season 10 alum Matt Mitrione was credited with two tackles during his nine-game NFL career ... Middleweight contender Costas Philippou hails from Cyprus, a 3,572-square-mile island in the Mediterranean Sea ... Pat Healy, who now competes at 155 pounds, was the first man to hold the Maximum Fighting Championship welterweight title ... When Alex Caceres was born on June 20, 1988, the top five movies at the box office were “The Dead Pool,” “Coming to America,” “Who Framed Roger Rabbit,” “Bambi” and “Big” ... Heavyweight Nandor Guelmino trains out of Vienna, Austria, some 4,300 miles away from the UFC 165 venue ... The unbeaten Myles Jury sports 20-, 48-, 49-, 57-, 62- and 69-second finishes on his resume ... A black belt in tae kwon do, Canadian welterweight Chris Clements has captured MMA titles in the Professional Fighting Championships, Ringside MMA and Xtreme Cagefight Championship organizations ... Tristar Gym representative Ivan Menjivar has competed in four different divisions during his career: bantamweight, featherweight, lightweight and welterweight ... John Makdessi is one of only two men in UFC history -- Shonie Carter is the other -- to have scored a spinning back fist knockout inside the Octagon ... Mitch Gagnon has submitted five different opponents with a guillotine choke ... Michel Richard dos Prazeres has fought for 12 promotions in his 17-fight career: the UFC, Shooto Americas, Jungle Fight, Iron Man Championship, Midway Fight, Mega Champion Fight, Predador Fight Championship, Ilha Combat, Iron Man Vale Tudo, Super Vale Tudo, Desafio de Gigantes and Open Fight Vale Tudo.