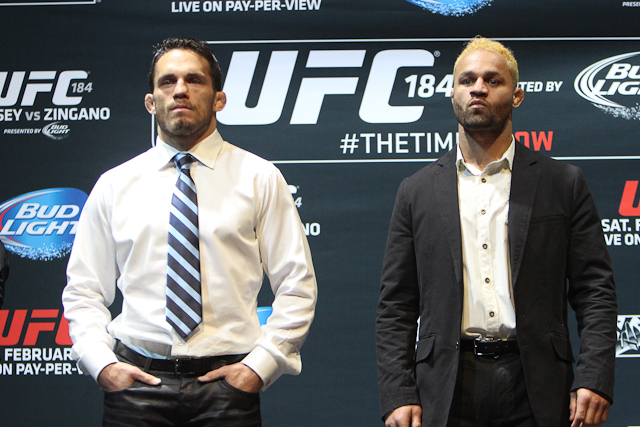 Josh Koscheck has not won a fight since February 2012. | Photo: TJ De Santis/Sherdog.com

The 37-year-old will return to the Ultimate Fighting Championship’s hallowed Octagon for the first time in more than a year when he meets Jake Ellenberger in a welterweight showcase at UFC 184 “Rousey vs. Zingano” on Saturday at the Staples Center in Los Angeles. Koscheck has not competed since being knocked out by Tyron Woodley at UFC 167 in November 2013, some 15 months ago.

“I wanted to take some time off to refresh my brain, refresh my body,” he said in a pre-fight interview with UFC.com. “When you’ve being going as long as I have for as hard as I have, you need to just take a step back and experience what life is and what life has to bring after this game is done.

“The long wear and tear of just the long 12 years of grinding for this sport caught up to me,” Koscheck added, “and I needed to take a break from the game for a little bit, just take a step back, take a deep breath, refocus and make another run at this thing.” 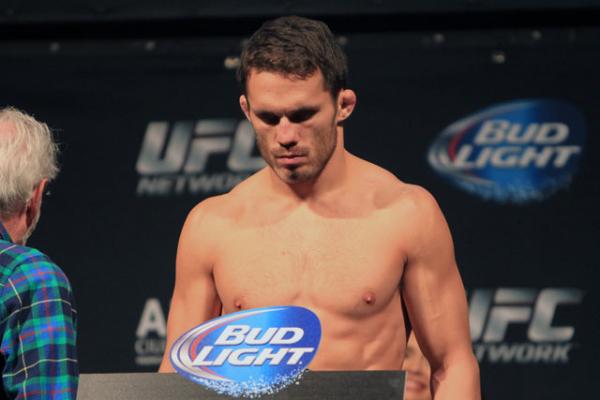 Photo: Jeff Sherwood/Sherdog.com
Ellenberger wields light-switch power.
A graduate of Season 1 of “The Ultimate Fighter,” Koscheck has compiled a 15-8 record in the UFC, including wins over Anthony Johnson, Diego Sanchez, Paul Daley and Matt Hughes. Those 15 wins tie him for seventh on the promotion’s all-time list, trailing only Georges St. Pierre (19), Hughes (18), Anderson Silva (17), Chuck Liddell (16), Randy Couture (16) and Gleison Tibau (16). However, a three-fight losing streak will greet Koscheck when he steps back in the spotlight, as successive losses to Woodley, Robbie Lawler and Johny Hendricks preceded his sabbatical.

Koscheck claims to have adjusted his approach ahead of his showdown with Ellenberger, a notoriously heavy-handed Nebraskan who has secured 18 of his 29 professional victories by knockout or technical knockout.

“A lot of my fights, you go in there and you just kind of brawl,” he said. “That’s not the way to go in there and win fights. I’ve got to freakin’ use my brain and use the technique that’s been instilled in me over the last year and a half to really go out there and focus and put that to work in this fight.”

A four-time NCAA All-American wrestler at Edinboro University, Koscheck views his encounter with Ellenberger as a potential late-career springboard.

“I believe that, yeah, I do have another title run in me, but it all starts right now with Jake Ellenberger,” he said. “I can beat Jake, and we’ll see where it goes after that. I’m not looking past him. I’m looking right at him.”

A MAN ON THE BRINK 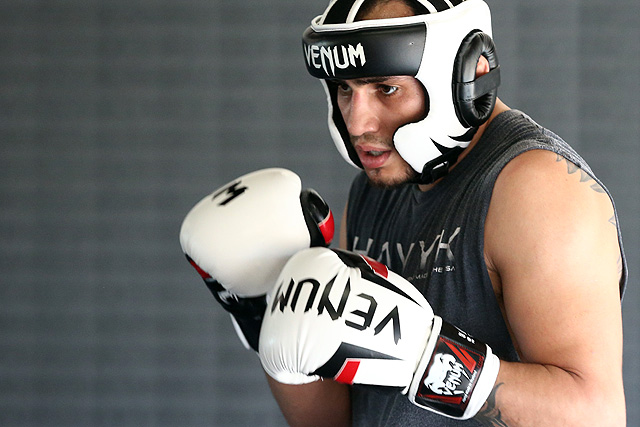 “The Ultimate Fighter” Season 13 winner will put his four-fight winning streak on the line against American Top Team brute Tibau as part of the UFC 184 main card. Ferguson carries plenty of momentum, having submitted Abel Trujillo with a second-round rear-naked choke at UFC 181 in December. In Tibau, he draws one of the lightweight division’s most experienced and successful fighters. A replacement for the injured Yancy Medeiros, the 31-year-old Brazilian has rattled off nine wins in his past 12 outings, losing only to Khabib Nurmagomedov, Evan Dunham and Michael Johnson.

“This guy is going to be trying to go after my feet,” he said in an interview with MMAHeat.com. “I’m counting on my standup to be more powerful than his. The game is going to be simple: It’s David versus Goliath. This guy’s huge, and I’m going to go in there and smack him around.” 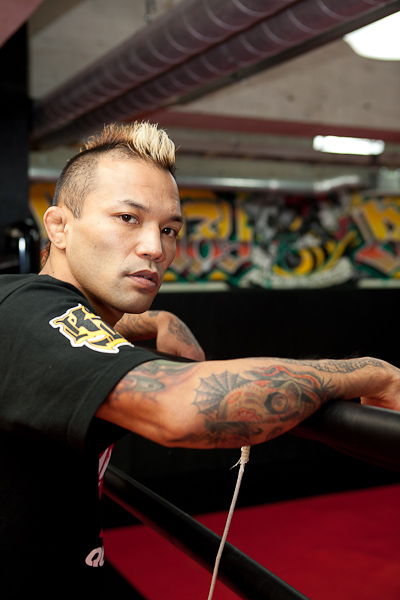 (+ Enlarge) | Photo: Daniel Herbertson/Sherdog.com
Can “Kid” reclaim the magic?
UFC 184 “Rousey vs. Zingano” will be the 310th event the Ultimate Fighting Championship has staged in its history ... Cat Zingano was a two-division champion inside the Ring of Combat organization ... Jackson-Wink MMA representative Holly Holm owns a 33-2-3 record as a professional boxer ... Alan Jouban holds the rank of brown belt in Brazilian jiu-jitsu under Eddie Bravo ... Mark Munoz was a two-time NCAA All-American wrestler at Oklahoma State University, where he compiled a 111-27 career record and won a national championship in 2001 ... When Norifumi Yamamoto climbs back into the cage, a total of 1,736 days will have passed since his most recent victory: a knockout of Federico Lopez at Dream 14 in May 2010 ... The six men who have beaten James Krause -- Jorge Masvidal, Bobby Green, Clay French, Toby Imada, Ricardo Lamas and Donald Cerrone -- sport a cumulative 142-48-1 record ... Masio Fullen was a national tae kwon do champion in Mexico ... According to FightMetric figures, Ruan Potts has been outstruck 101-29 and surrendered six of the seven takedowns attempted against him in his two UFC appearances, both of them losses ... When former King of the Cage champion Tim Means was born on Feb. 20, 1984, the top movie at the domestic box office was “Footloose” and the No. 1 song on Billboard’s Hot 100 list was Culture Club’s “Karma Chameleon.”