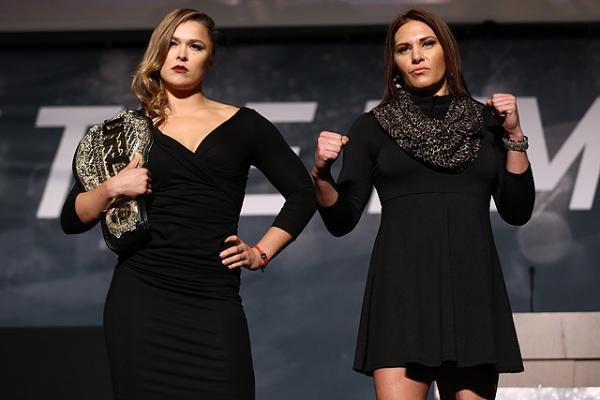 Ronda Rousey will put her bantamweight title on the line against Cat Zingano. | Photo: Dave Mandel


The UFC 184 lineup has been shuffled and reshuffled, and though the event is now more of an afterimage of its original soma, the headlining showdown between Ronda Rousey and Cat Zingano remains genuinely compelling.

Rousey has not competed since her 16-second demolition of Alexis Davis in July. After undergoing successful knee surgery, she looks to continue her run of dominance by adding a fifth Ultimate Fighting Championship title defense to her resume on Saturday at the Staples Center in Los Angeles. In 10 fights, “Rowdy” has notched 10 finishes, with only one of those bouts making it past the opening frame. Traditionally, Rousey’s vaunted armbars have done the heavy lifting, but her last two fights have ended by technical knockout, showing an evolving skill set for the so-far untouchable champion.


On the other side of the cage, the undefeated Zingano has for years been considered the most legitimate threat to Rousey’s throne outside of Cristiane Justino. Their original fight in 2013 was postponed as the corollary of Zingano’s subsequent knee injury and harrowing personal tragedies. In her UFC run thus far, “Alpha” has looked every part the powerhouse she was advertised as being, as she has brutalized the durable Miesha Tate and ragdolled a surging Amanda Nunes.

It is hard to understate the amount of sheen UFC 184 has lost due to injuries, but the Rousey-Zingano championship fight remains an exciting matchup and perhaps the most highly anticipated women’s bout to date: 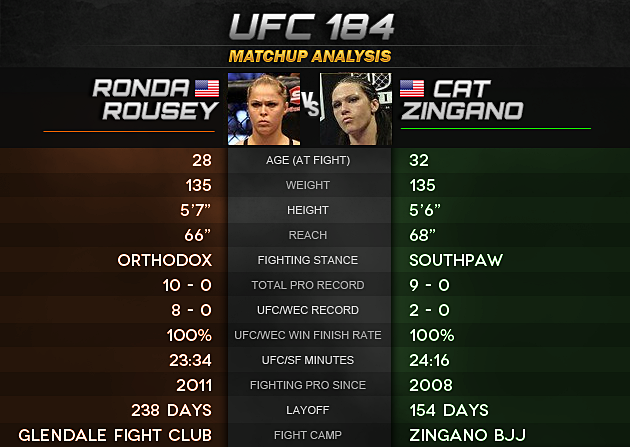 There is not much anthropometric separation between the two combatants, though the combination of both a height advantage and a reach disadvantage tends to bode poorly. Where Zingano’s reach advantage could pay dividends, though, is as a complement to her southpaw stance; Rousey has yet to fight against a southpaw, let alone anyone as powerful as Zingano.

As far as time-related advantages go, it is difficult to say who holds the edge. Zingano is a few years older, has been fighting professionally a few years longer and has had less time off since her last fight, but none of those disparities are great enough to be considered absolutely game-changing. In two fights, Zingano has clocked more UFC minutes than all eight of Rousey’s Strikeforce and UFC fights combined, whereas “Rowdy” has fought on championship, headlining stages for the last three years. In accumulation, all of these factors seem to slightly favor the incumbent champion.

Overall, the tale of the tape does not reveal much to sway the fickle, so let us take a look at the striking numbers: 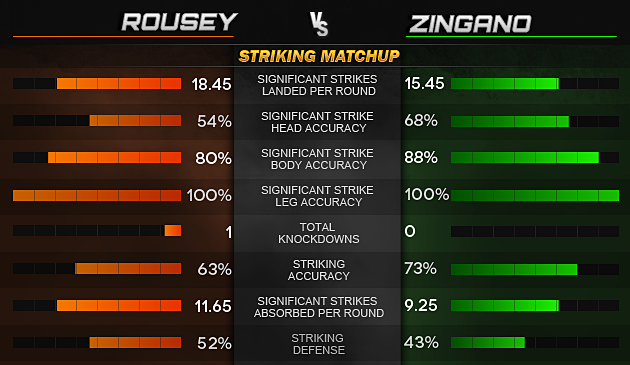 Just as a preface, it is worth noting that neither Rousey nor Zingano have much in-cage content to analyze, and due to the lack of statistics available, these figures will expectedly fluctuate significantly as they put more fights behind them. That being said, the numerical trends are consistent with eyeball analysis.

The real difference is their preferred striking distance. Rousey has an even-keeled striking game, with 45 percent coming at distance and the rest almost perfectly split between clinch and ground strikes. Zingano delivers a lopsided amount of strikes on the ground -- 57 percent of her total, to be exact -- with only 26 percent coming at distance and 17 percent in the clinch. While these numbers will likely adjust to a yet-unknown mean, they are indicative of her striking style: Zingano tends to throw single strikes at distance as a method to cover ground and clinch. From there, she works to muscle her opponents to the ground and rain down punches and elbows from a dominant position.

The defending champion’s striking game is still under construction, and its continuing evolution could play a central role in the outcome of the fight. Already, Rousey throws combinations much more frequently than her opponent, hence the greater percentage of distance strikes and the overall greater output. However, the difference is this: Rousey’s game could still undergo fundamental alterations as her career progresses, and we have been seeing signs of that already. Zingano’s game, however, is basically dialed in at this point; she can always become sharper technically, but her style and purpose of striking will likely remain static. This difference creates an air of mystery surrounding how Rousey will perform on the feet come fight night and whether or not Zingano can make adjustments on par with the champion’s rate of improvement.

Then, there is the grappling matchup: 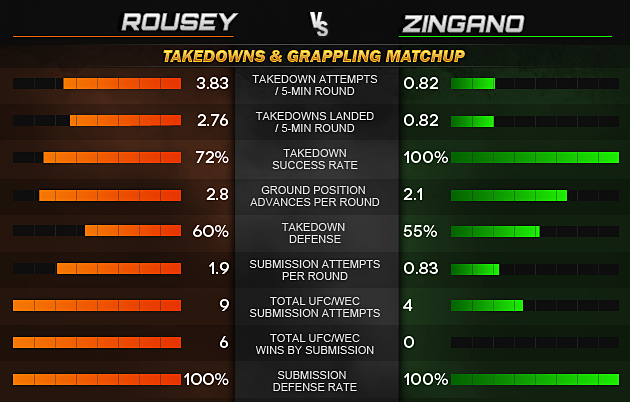 Rousey is the more decorated grappler as an Olympic bronze medalist in judo, and she is also much more active, in all phases of MMA grappling. She works for a takedown every 78 seconds and usually succeeds. From there, Rousey advances positions and attempts submissions more frequently, and her submissions are close to guaranteed finishes.

Zingano uses submissions most effectively as means to stall or sweep opponents; she is an apt scrambler and capable of holding onto a mount position well enough to inflict fight-ending damage. Her takedowns appear to be more muscle than technique, but they have worked every time in the UFC. She shucks opponents to the floor -- or, in the case of Nunes, suplexes them -- and works for the mount. She has two previous submission wins, one by way of rear-naked choke and the other via anaconda choke. That they were both chokes testifies to her tendency to utilize her sheer physical strength.

Given her power advantage over the rest of the division, it comes as a bit of a surprise that Zingano struggles to fend off takedowns. Both Tate and Nunes took her down with underhook hip tosses, and Rousey just may have the best fight-adjusted judo in the history of the sport. Combined with Rousey’s killer instinct for ending fights on the ground, it does not appear to be a smart strategy for the challenger to try her hand on the mat.


Rousey is currently as high as a -1000 favorite, and despite being sold as the toughest test of the champion’s career, Zingano is as much as a +674 underdog, implying that she only has a 13 percent chance at winning. Those are steep odds, but they may be justified by the numbers; Zingano wins through clinch and ground work, but Rousey does it better. There is a path to victory for the challenger, and for the first time, it feels like Rousey may have some legitimate competitive adversity to overcome. Will Zingano be able to pull off the upset or even make it to the final bell, or is this just the next name on Rousey’s marathon of supremacy?