The middleweight title picture in the Ultimate Fighting Championship is about to get weird.

Newly minted middleweight champion Michael Bisping at UFC 204 on Saturday in Manchester, England, will defend his belt for the first time in his home country against Dan Henderson, who knocked him senseless seven years ago at UFC 100. “The Count” was long considered past the point of being a serious title contender, but “The Ultimate Fighter 3” winner has since experienced a late-career resurgence that culminated in a first-round knockout of Luke Rockhold at UFC 199 in June. This will be the first time Bisping fights three times in a year since 2010. It will also be his 27th fight in the UFC, which will tie him with Frank Mir and Tito Ortiz for the most all-time.


Advertisement
It is not often that a single-fight winning streak earns a crack at the title, but that is exactly where Henderson finds himself. The 46-year-old is a legend of the sport, though he has not won back-to-back fights since 2011. The former two-division Pride Fighting Championships titleholder is 2-2 since dropping back to middleweight in 2015. His last fight was a second-round knockout of Hector Lombard, which happened the same night that Bisping claimed the title. Prior to that, “Hendo” was 2-6 over the course of four years and hardly in the title hunt. This will be his second fight of the year and quite possibly the final fight of his storied, decades-long career.

This is not the average title fight, but it is an intriguing matchup for several narrative and stylistic reasons. Here is what the Tale of the Tape has to say: 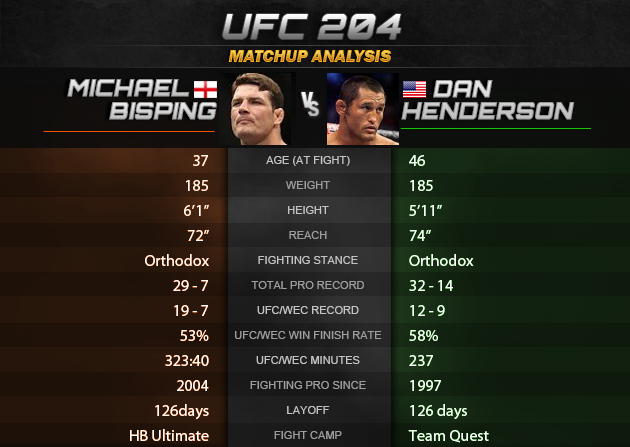 Fair warning: Age permeates every analytic angle in this fight. You have to give the anthropometric edge to Bisping. Although being taller with a shorter reach typically does not bode well for a fighter, the extra nine years of wear and tear on Henderson almost certainly negates his two-inch reach advantage. Bisping has never been a stellar athlete, whereas Henderson was a two-time Olympian, but an above-average 37-year-old athlete with 13 years of competition behind him is surely in better physical condition than a 46-year-old with more than 20 grueling years of high-level competition. With nearly 84 years shared between them, this is the oldest title fight in the history of the UFC.

Usually there would be something to say about an experience advantage, but it is hard to say one has an edge over the other in this regard. Henderson has been fighting professionally for seven more years, but Bisping has logged more in-cage UFC minutes than anyone else, except for Frankie Edgar and Georges St. Pierre.

The final stat of which to make note is the layoff. Of course, Bisping and Henderson fought last on the same night; however, there are some differences that could play out meaningfully on this fight. First is obviously the age difference. It is very possible that three months to rest from the last fight and train for the next one favors the younger fighter. Compounding that is the type of fight they endured. Bisping took relatively little damage in his first-round knockout of Rockhold, whereas Henderson was walloped for an entire round by Lombard before coming back from the brink and winning the fight. It may or may not have any actual impact on the fight, but the possibility makes it worth noting.

Let us get into the actual matchup. Here are the striking numbers: 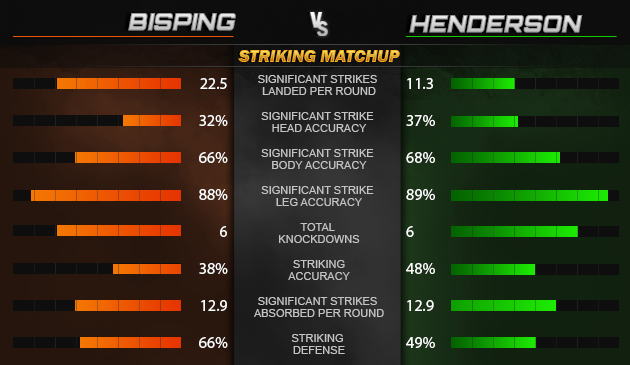 A bit of housekeeping: From here on out, the statistics reflect all the middleweight fights Henderson and Bisping have had since 2008. It may seem random, but it is actually a tidy control; both started their UFC middleweight careers that year. The astute fan might point out that Henderson won a middleweight tournament at UFC 17, but fights from 18 years ago do not shed much light on the fighter “Hendo” is now.

Bisping is the more native striker of the two, as Henderson’s career started in wrestling. He is crafty at range, where he works at the third-highest rate in the division. Bisping also does not lose much in the way of accuracy for how many more strikes he throws, at least compared to Henderson. A total of 86 percent of his strike attempts are aimed at the head, with the remaining 14 percent split between the body and legs. He prefers to strike at distance, where 89 percent of his total strikes originate; the clinch and ground account for the other six percent and five percent of his total output. While not known as a power puncher at all, Bisping does have the ability to put people down, which he has done six times as a middleweight -- most notably in his first-round knockout to win the belt against Rockhold.

Henderson, on the other hand, is a much different kind of striker. His work rate is almost exactly half of Bisping’s, and he tends to stalk opponents by pressuring them into close quarters. Given his famous “H-Bomb” of a right hand, Henderson is more prone to stay in the pocket or clinch with opponents. His preferred target is strikingly similar to Bisping’s, with 86 percent aimed at the head, six percent to the body and eight percent to the legs. His preferred range is a telling difference, though: 67 percent of his strikes come at distance, with 14 percent in the clinch and 19 percent to grounded opponents. This will likely be the driving style matchup of the fight. Bisping will want to stay out of the pocket and the clinch and pick apart Henderson at range, while Henderson will want to slow down Bisping’s game and eliminate the distance between them as much as possible.

The X-factor here, as with all fights involving Henderson, is the triad of power, durability and defense. Henderson still has one-punch power -- those six knockdowns are from his eight middleweight bouts, which is an insane average compared to Bisping’s six knockdowns in 21 fights. At the same time, Henderson has become significantly less capable of taking a punch and recovering in his older age. Both Bisping and Henderson are hittable, making this a game of who eats a fight-altering shot first.

While the fight will likely take place primarily on the feet, here is how it will look if it becomes a grappling match: 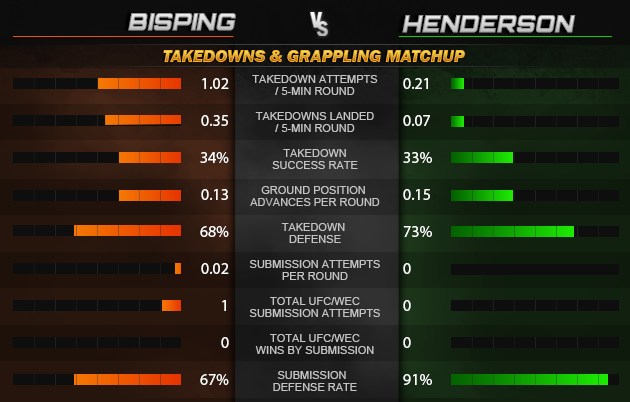 While Henderson has a decorated wrestling career, it has been a long time since wrestling was an active part of his MMA game. He has not attempted a takedown at middleweight since going 1-for-3 against Anderson Silva, and everyone who has tried to take him down more than once in a fight has succeeded. Beyond that, his submission game is statistically nonexistent, although his submission defense has been excellent, outside of getting choked out by Silva. He can still be dangerous when he is on top, but it is rare to see Henderson in that position.

Bisping’s wrestling game is competent. He has a handful of takedowns in his repertoire, and he uses them effectively to change the pace of a fight and break his opponents’ rhythm. He does not complete them often, and when he does, he tends to establish position more than throw strikes or look for submissions. Bisping’s grappling game is predicated on defense; he has decent takedown defense, but he scrambles and stalls fights in his guard well. While his submission defense will almost certainly not come into play against Henderson, it is better than 67 percent makes it look. The only time he has been submitted was after being rocked on the feet by Rockhold in their first meeting. Other than that, he has prevented and defended every submission attempt thrown at him.


Bisping is the favorite anywhere between -210 and -260, while “Hendo” is in the +160 to +201 underdog range. These numbers seem fair. Henderson is always dangerous, as he can still land that massive overhand that will end anyone’s night, but his age and withering durability are huge factors working against him. It is demonstrable fact that he is a shot fighter, and while Bisping is no spring chicken either, his four-fight winning streak is proof that he is still capable of improving and competing at the highest levels, which is legitimately impressive for a 37-year-old with 36 professional fights. Clearly, this fight is composed of more spectacle than actual competitive merit, but the spectacle is fascinating nonetheless.

Data for the analysis was provided by FightMetric. Eric Stinton performed all analysis. Stinton and Sherdog.com assume no responsibility for bets placed on fights, financial or otherwise.
Related Articles
Latest News
ALLUFCBELLATORPFLONE