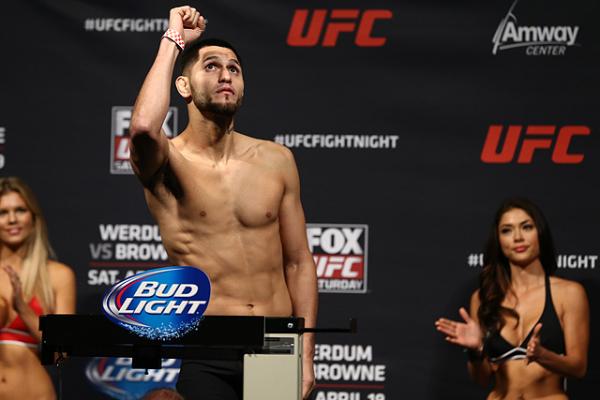 
Jorge Masvidal does not see a clear and present danger in Pat Healy.

American Top Team’s Masvidal will lock horns with Healy in a preliminary lightweight scrap at UFC on Fox 11 on Saturday at the Amway Center in Orlando, Fla. The 29-year-old “Gamebred” doubts whether or not Healy will be able to utilize his customary mode of attack, which often depends on cardio, clinches and takedowns.

“I just don’t think he matches up well with me,” Masvidal told Sherdog.com. “For starters, I’m way more athletic than him ... and just the wrestling factor. He can do well with guys he can tire out against the cage. I ain’t never gotten tired from somebody pressing on me or nothing like that. I ain’t never come close to breaking or fatiguing. He has to come up with a new game plan, and he’s not going to change [after] 50-something fights. He’s not going to change his game plan.”

Masvidal last fought at UFC Fight Night 31 in November, when he wound up on the wrong side of a unanimous decision against Rustam Khabilov at Fort Campbell in Hopkinsville, Ky. The defeat cost him a three-fight winning streak and slowed his rise in the lightweight division.

“That’s one of the few fights I’ve lost that I actually got a lot from,” Masvidal said. “They always say you learn more in a loss. I don’t think so, but this one was one of the ones I actually learned a couple things.”

Healy brings experience, toughness and an undying resolve to the table. The 30-year-old Strikeforce veteran last competed at UFC on Fox 9 in December, when he lost a unanimous verdict to Bobby Green at the Sleep Train Arena in Sacramento, Calif. Healy has made a healthy living out of grinding down opponents in close quarters.

“I know he’s guaranteeing that he’s going to try and wrestle me,” Masvidal said. “I don’t see that happening, though. I don’t see him taking me down and especially holding me down. He gets a takedown maybe, but he won’t ever hold me down, so I don’t know what his game plan is going to be.

“In my whole career, I’ve never been ridden out by nobody,” he added. “He’s been telling people he’s going to ride me out. I just don’t see it happening, especially by him.”

Masvidal believes he can contend in the Ultimate Fighting Championship’s lightweight division, and he plans to use his performance against Healy as proof.

“I haven’t gotten one fight that I’m like, ‘Damn, that’s a tough matchup,’ yet, that in my head I’ve been like, ‘That’s a bad matchup for me.’ No, not yet,” he said. “There’s definitely tough fights, but I don’t think Pat is one of them for me.” 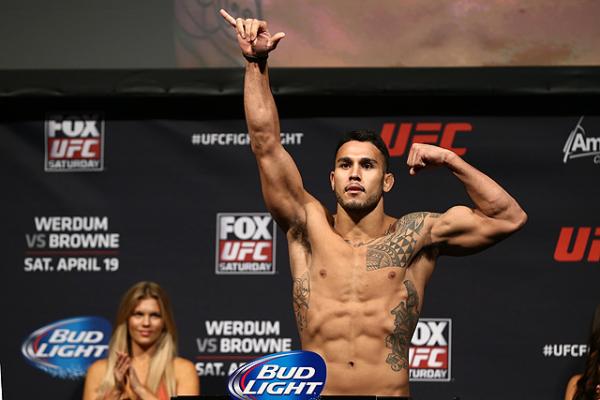 Photo: D. Mandel/Sherdog.com
Tavares is 7-1 in the UFC.
A formidable obstacle stands between Brad Tavares and his desire to further his cause in the 185-pound weight class.

Tavares will put his five-fight winning streak on the line when he confronts 2000 Olympic silver medalist Yoel Romero Palacio in a showdown between two fast-rising middleweights. The 26-year-old Hawaiian has flown under the radar following his successful stint on Season 11 of “The Ultimate Fighter,” having compiled a 7-1 mark inside the Octagon.

Beating Palacio, an imposing physical specimen who has never lost as a middleweight, would likely open even more doors for Tavares. The 36-year-old American Top Team representative has put away all three of his foes -- Clifford Starks, Ronny Markes and Derek Brunson -- since arriving in the UFC.

“Yoel is a very tough fighter, very strong, with excellent wrestling,” Tavares said in his pre-fight interview with UFC.com. “It’s a nice little challenge for me to fight someone who is an Olympic medalist.”


Miesha Tate was one of four fighters to hold the Strikeforce women’s bantamweight championship, along with Sarah Kaufman, Marloes Coenen and Ronda Rousey ... Onetime Ring of Combat titleholder Edson Barboza has finished three different opponents with leg kicks: Marcelo Giudici, Mike Lullo and Rafaello Oliveira ... Khabib Nurmagomedov is a two-time combat sambo world champion ... When American Top Team’s Thiago Alves climbs into the Octagon at UFC on Fox 11, two years, five months and 14 days will have passed since his most recent victory -- a rear-naked choke submission against Swedish judoka Papy Abedi at UFC 138 ... Bosnian prospect Mirsad Bektic lists Chuck Norris and Steven Seagal as his heroes ... Arizona Combat Sports export Estevan Payan served three tours of duty in Iraq as a member of the United States Army ... Born on Oct. 1, 1981, “The Ultimate Fighter” Season 7 alum Luke Zachrich shares a birthday with actor Zach Galifianakis, baseball hall of famer Rod Carew and former U.S. President Jimmy Carter ... Jordan Mein sports 18 first-round stoppages on his resume ... Ray Borg, 20, is the second youngest fighter on the UFC roster ... Heavyweight Jack May will enter his promotional debut at a perfect 7-0, but his seven opponents have combined for a 23-45-1 record.