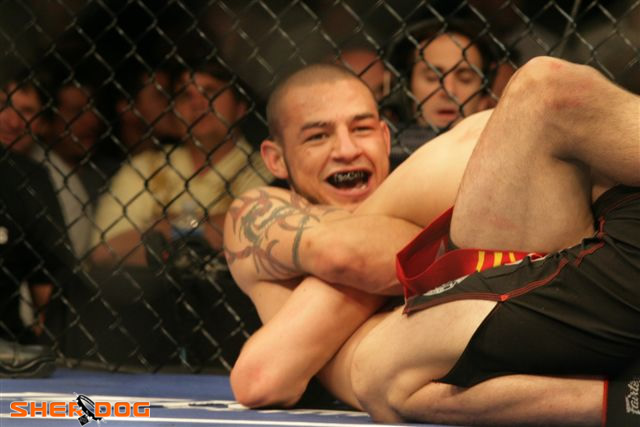 
Some men dwell on their missteps. Others learn from them.

Cub Swanson has followed each of his five professional defeats -- including a 35-second submission to Jens Pulver and an eight-second technical knockout against reigning featherweight champion Jose Aldo inside World Extreme Cagefighting -- with a victory. The 29-year-old Jackson’s Mixed Martial Arts representative followed the same pattern when he entered the Ultimate Fighting Championship with a submission loss to Ricardo Lamas at UFC on Fox 1 in November 2011. Swanson proceeded to finish his next three opponents.

Swanson, who has persevered through a number of injuries throughout his career, finds himself on the verge of title contention at 145 pounds, as he prepares for his battle with American Top Team’s Dustin Poirier in the UFC on Fuel TV 7 co-main event this Saturday at Wembley Arena in London. He points to one factor when discussing his resurgence.

Originally booked to face Dennis Siver, Swanson was primed for an orthodox opponent. However, an injury forced the Russian-born German kickboxer to exit the match, leaving the door open for Poirier, a 24-year-old southpaw. Swanson embraced the change.

“Down at Jackson’s, we kind of spar everybody,” he said. “I was already sparring some southpaws here and there, and I trained almost eight months for Erik Koch -- back-to-back camps where we didn’t fight. I had wanted to fight a southpaw, so when they gave me [Poirier’s] name, I was like, ‘Sweet. Sounds like fun. Let’s do it.’”

Lightweight contender Anthony Pettis, already in line for a shot at 155-pound gold, made headlines recently when he leapfrogged a stout list of featherweight hopefuls for a crack at Aldo’s title on Aug. 3. Swanson believes he has done enough to state his case and seems content to let the situation play out.

“I feel like I have been speaking up a little bit, and I feel like it’s made a difference,” he said. “That’s probably all I’ll do. I’m just enjoying fighting right now. I’ve been doing well, and my goal -- my ultimate goal -- is to be the best I can possibly be. When I retire at the end, I just want to be happy with my progression. If it takes me to being the world champ, then I’d be blessed.

“Right now, I’m just taking one fight at a time and enjoying the ride,” Swanson added. “I fight for the UFC. That’s a lot of people’s dream job right there.”

No Urgency from ‘Mayday’

File Photo
McDonald turned 22 in January.
Michael McDonald does not sound like your average 22-year-old when discussing his forthcoming matchup with interim bantamweight champion Renan “Barao” Pegado in the UFC on Fuel TV 7 headliner. While a victory would make him the youngest fighter to ever win a UFC championship, McDonald sounds determined to stay grounded.

“I feel like if I’m going to look at it, if I’m going to let it sink in, the time is afterwards; the time isn’t right now,” he said. “I’m human like anybody else. My mind and emotions are open for corruption if I let it in. I don’t want to let in anything different in this fight from all my other fights. This is just another day. Maybe afterwards I’ll think about it and be happy with myself, but right now is not the time. The task in front of me is the task in front of me, and that’s it.

“This is just like any other fight,” McDonald added. “If I think, ‘Oh, my gosh, this is the first time I’m fighting for a title,’ you get a sense of anxiousness and you don’t feel like you’ve been there before.”

Spawned by the Last Stand Fight Team, McDonald faces a tall order in “Barao.” The 25-year-old Nova Uniao export has won 19 consecutive fights since his December 2007 encounter with Claudemir Souza ended in a no contest. “Barao” last appeared at UFC 149 in July, when he captured the interim bantamweight crown with a unanimous decision over Urijah Faber. His well-rounded skills have made him one of the most respected fighters in the sport.

“I try not to look at people and the way that they fight,” McDonald said. “No one fights the same. No two fights are the same. Even if you fight the same person, it’s a different fight. I just try to look at skill sets, the skills people have, what they’re good at, strategies, and place my own against that.”

McDonald will enter the cage on a nice streak of his own, having won his past eight bouts. He staked his claim to the top contender’s seat at UFC 145 in April, when he wiped out former WEC champion Miguel Torres in a little more than three minutes. Just a month removed from his 22nd birthday, McDonald was content to wait his turn on the 135-pound carousel.

“I took a very conservative approach, not calling anybody out and making sure that when I get here, I feel like I’m ready,” he said. “Of course, everybody thinks that they’re ready, but I wanted to make sure I could see people’s fighting styles and understand their fighting styles. I believe that when you understand something, you can either break it, build it or repair it.

“Until I can understand the people I’m fighting against, the competition fully, I wanted to really be patient,” McDonald added. “I feel like now I can look at people, understand what they’re doing and feel confident in myself.”