TOKYO -- Thanks to Shooto’s rules on draws in championship bouts, 132-pound champion Masakatsu Ueda successfully defended his title Sunday in the main event of Sustain’s third installment of Shooto Tradition.

In the first period, Ueda stalked Galvao about the ring, trading low kicks and pawing jabs. Though known for his superior technical wrestling ability, Ueda was unsuccessful in capturing takedowns, only barely dragging Galvao to the mat midway through the second.

Instead, Ueda showed off his ever-evolving standup, courtesy of Rambaa Somdet. He mixed things up with combinations of hard low and body kicks to punches that had the Brazilian backpedaling.

After stuffing most of the champ’s takedowns, though, “Louro” punished him with stinging counter hooks and hard knees to the body and jaw. Be that as it may, the dogged Ueda continued to push forward regardless of the counters, trading blow for blow en route to setting up takedowns.

By the time the fight went to the scorecards, all three judges’ opinions clashed. One judge ruled the bout a draw (29-29) with the two remaining judges splitting for Ueda (30-29) and Galvao (29-28).

Though the main event ended in a disappointing split draw, the theme of the evening appeared to be that of “swangin’ and bangin’” for the rest of the fights.

Yuki Shoujou’s tactic of careening head-on into his opposition had failed miserably against Mamoru Yamaguchi in February, but it worked Sunday against another perennial top 123-pounder in Yasuhiro Urushitani. Known for his slick counter-fighting skills, Urushitani proved slippery as always. An undaunted Shoujou persevered, though, constantly pushing for single-leg takedowns and low kicks.

After suffering what looked to be a broken nose from three high-flying Urushitani knees in the third, things looked bleak for Shoujou. But a botched takedown was just the break he needed to lock a guillotine on Urushitani for the tap at 3:23. 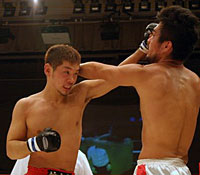 Caitalin Abu Baker/Sherdog.com
Shintaro Ishiwatari (left) outslugged
Tenkei Fujimiya Sunday in Tokyo.
In a 143-pound bout, Shintaro Ishiwatari came out swinging and forced the Tenkei Fujimiya of old to awaken and return the favor. With both men throwing with the intent to decapitate, Ishiwatari’s balls-out approach saw that he met his mark first, scoring the knockdown despite eating Fujimiya’s best shots.

With his wild, unruly hooks, Ishiwatari racked up headshot after headshot. Referee Toshiharu Suzuki called the bout after Fujimiya had been knocked down a second time at 4:08 into the first round.

By the second round, Somdet had Tahara limping and cowering in corners, unsure of whether to expect the low kick or a stiff right to the face. Tahara’s attempts to keep Somdet down met with limited success as well, as Somdet either reversed, or in one particular instance, kept Tahara at bay with a spider guard that created enough distance for him to punch from the bottom before scrambling to his feet.

Though suffering a point deduction for a knee to the face while Tahara was grounded, Somdet’s complete destruction of his opponent made sure that he received the unanimous decision (29-27, 29-27, 29-26).

Coming in with the intent to hammer away at Takuya Mori on the feet, Masaaki Sugawara quickly found that the Sapporo native was happy to return the favor. Sugawara opened with low kicks and finished out with multi-punch combinations, but Mori tagged him with counters just as often as he was tagged himself, thanks to his constant stance switching.

The bloodier of the two, Sugawara pulled ahead in the third with a picture-perfect right straight that put Mori down, where Sugawara ended the bout on top with hammer fists. Two judges ruled the fight in Sugawara’s favor (30-27, 29-28) for a majority decision while one ruled the bout a draw (29-29).

In the 115-pound rookie tournament semifinal, Junji Ito shellacked Yoshitaka Aki with punches on the feet. Ito followed with lunging ground-and-pound punches from standing until the referee saved Aki at 4:01 into the first round.

Atsushi “Mitsuru” Kobayashi got the TKO over Hiroshige Tanaka by way of a vicious knee that put Tanaka down while changing levels. After answering the count, Tanaka shot again but was reversed and caught in a guillotine. It was here that the referee noticed the copious amounts of blood coming down the right side of Tanaka’s face, forcing him to call the bout at 59 seconds into the second period.

Mimicking “Wicky” Akiyo Nishiura, Kentaro Watanabe danced straight toward opponent Kota Funaki in spite of the stinging counters to slug it out and win the unanimous decision in their 123-pound rookie tournament semifinal.