Neither his coach nor his training partners nor his management could say anything about the whereabouts of the likeable Norwegian.


Advertisement
Since the Dec. 31 bout in Japan had been reportedly cancelled due to Hansen failing medical clearance because of a head injury, wild rumors circulated about the physical condition of the 29-year-old “Hellboy.” Fueled by non-statements from Dream event producer Keiichi Sasahara, speculation even went as far as suggesting Hansen might suffer from a possibly career-ending brain tumor.

John Benjamin, who represents Joachim Hansen in business matters, told Sherdog.com exactly what went down at Saitama Super Arena before the fight: “Joachim was warming up with a training partner and when attempting a takedown, his teammate landed awkwardly on his head. He was immediately rushed to the hospital where they diagnosed a concussion, which is why the fight had to be cancelled.”

On Friday morning Sherdog.com reported that Hansen is healthy now but in a contract dispute with Fighting & Entertainment Group. However, Benjamin contacted Sherdog.com to make it clear there is no “dispute” with FEG. Rather, Hansen’s management is in negotiations with the company and expects to iron out a date for his first title defense.

Meanwhile Hansen is resting in Norway.

French lightweight David Baron will miss out on a chance to avenge his May 2006 loss against Scandinavian rival Per Eklund. Baron had to withdraw from their Feb. 21 bout due to a persistent foot injury. Even though the injury did not prevent him from training for the fight, it is too serious to compete with, as Baron is unable to weigh both legs evenly, let alone run, a source from his camp told Sherdog.com.

The 36-year-old former European Shooto champion made the UFC on the back of a surprise submission win over Japanese standout Hayato Sakurai in May of last year. He botched his UFC debut last October, however, when Jim Miller choked him out. After what happened to his compatriot Samy Schiavo, who was cut from the promotion following two losses, the fight against Eklund was already seen as Baron’s final chance in the UFC.

A replacement for the firefighter from Bois-Colombes, a commune in the northwestern suburbs of Paris, has since been found in newcomer Evan Dunham. The submission specialist, who fights out of Xtreme Couture in Las Vegas, is a veteran of the Northwestern MMA circuit and has also been a member of Team Shamrock at the PFP “Ring of Fire” event in the Philippines in late 2007. 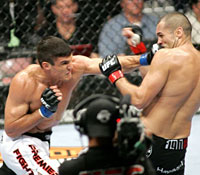 Photo by Sherdog.com
Goran Reljic will
continue to sit idle.
Reljic to miss first half of 2009

Young Croatian Goran Reljic, who made a boatload of new fans with his strong UFC debut against Wilson Gouveia last May, will be out of action longer than expected after recently undergoing back surgery.

Zoran Saric, who represents his 24-year-old countryman in business matters, explained the situation to Sherdog.com via e-mail:

Having Reljic return to Europe to fight on the June event in Germany “would have been a great idea, but unfortunately his medical situation will not allow him to fight. His back is getting better, but since Goran is a huge talent and getting very popular in the UFC, we need to be very careful with his health and career. I don't want to push him until he is 100-percent sound and ready to fight. We are constantly scanning his back and yesterday doctors in Zadar Hospital decided to do a small surgical procedure [connected] to the disc issue.”

Expect the spectacular kickboxer and skillful BJJ player to return to action at UFC 100 in July at the earliest. He will have gone more than 13 months without a professional mixed martial arts bout by then.

In the tradition of great European tournaments like KSW or the now-defunct European Vale Tudo series, Croatian promoter “UFC Gladiator” will put on an eight-man, one-night tournament to find the strongest fighter at 205 pounds.

The winner will get to take home a total of $10,000. Promoter Mario Urlic is currently accepting applications. It is expected that “UFC Gladiator” fighter Maro Perak will be in the tournament, and other top regulars of the European circuit like Jan Blachowicz, Igor Pokrajac, Mikko Rupponen and Jair Goncalves are also likely to enter, barring injury problems or promoter indifference.

The final roster and the brackets are likely going to be announced by early March. Sherdog.com will of course stay on top of the situation to keep you up to date on what promises to be a blast in the Balkans.

European top welterweight Paul Daley has made plans to face Belgian up-and-comer Tommy Depret in the main event of a self-promoted show, scheduled for March 29 in Daley’s hometown of Nottingham, England. The inner-European duel, which would be Daley’s first since his clash with Slovenian judoka Bojan Kosednar last July, is still on shaky legs due to prior commitments from both fighters.

Daley’s next fight will come against former Bodog Fight welterweight champion and UFC veteran Nick Thompson on the main card of MFC 20 “Destined for Greatness,” which takes place Feb. 20 in Enoch, Alberta, Canada. A Golden Glory product, Depret will see action against compatriot Wim Deputter in one of two MMA bouts at “It’s Showtime” in Antwerpen, Belgium, on Feb. 8.

With Daley’s management looking for a new deal with a major promotion following the collapse of EliteXC, “Semtex” has discovered new possibilities to keep himself busy by promoting his own events. Look for more top fighters without a major deal to follow his example in the years to come.

The M-1 Challenge -- M-1 Global’s vehicle to breed and discover up-and-coming talent from around the globe -- will kick off its second season on Feb. 21 in Seattle with battles between USA Team West and Brazil Naja, Fedor Emelianenko’s Imperial Team and Korea, as well as Finland vs. Benelux. Adding a third team challenge per event is one of the changes made to the format of the series.

The other reform for the new season concerns the participating teams: Joining France, Korea, Japan, the Russian Legion, Spain, the United States and the World Team, which were already featured on the first season, are now squads from the Benelux, Brazil, Bulgaria, Germany, Turkey and the U.K. The Red Devil Fighting Team will be replaced by Fedor Emelianenko’s Imperial Team.

Besides Seattle, the event series will have stops in Sofia, Bulgaria; Tokyo, Japan; Sao Paulo, Brazil; Kansas City, Mo.; Seoul, Korea; as well as Spain and England. Three of the most interesting fighters who are taking part in the Feb. 21 event are Finland’s Lucio Linhares, Russia’s Alexey Oleinik and Brazil’s Jair Sorriso.

Linhares is a “naturalized” Brazilian who has been living in Finland for four years now. The 35-year-old Alliance black belt is one of the premier BJJ instructors in Scandinavia and has successfully competed in MMA as well, defeating the ultra-tough Poles Grzegorz Jakubowski and Robert Jocz, as well as handing French hothead Karl Amoussou his first defeat in 16 months most recently.

Oleinik was brought into the Russian team as a replacement for “Baby Fedor” Kirill Sidelnikov, who has been drafted into Affliction in place of Aleksander Emelianenko. The 31-year-old sambo stylist is one opponent you definitely want to avoid, both at 205 pounds and at heavyweight, as he is well rounded, extremely tough and nearly impossible to finish.

Jair Goncalves is your typical late bloomer as far as MMA is concerned. A fantastic BJJ player who received extensive training both at Gracie Barra and at Nova Uniao, “Sorriso” made the transition to MMA in his late 20s. Gifted with one of the most impressive physiques of any 205-pounder, this Rio de Janeiro native has earned an excellent reputation in Europe in the last couple of years.

If you believe the list of names that has been leaked out on the Internet, the U.K. team that will take on an American squad during the course of the ninth season of “The Ultimate Fighter” reality series will be comprised of an interesting mixture of exciting veterans and potentially hopeful rookies. What has been baffling many experts is the exclusion of stalwarts Jim Wallhead and Abdul Mohamed, who undoubtedly possess the sporting skills to make the final 16.

In their absence, Wallhead’s Rough House teammate Andre Winner and Gloucester’s Che Mills appear to be the pre-show favorites to go all the way for the Brits. Winner is a former FX3 lightweight champion and has been very busy in his young career, fighting 12 times since turning pro in 2006 and beating some decent opposition. Mills is the cousin of UFC veteran Mark Weir and a former Cage Rage British welterweight champion. He has good hands and the killer instinct to finish fights.

Note: This article was updated at 2:15 EST on Feb. 6 with clarification from Hansen's camp as to his injury and contract status with FEG.