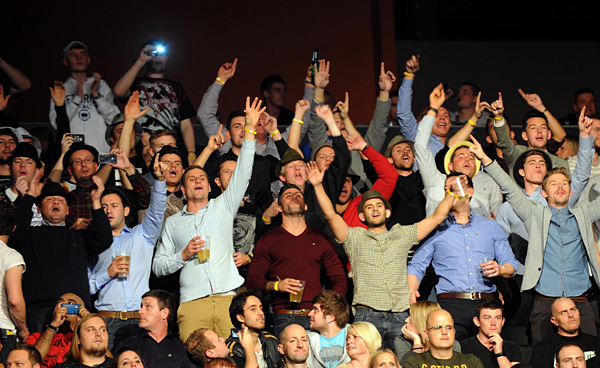 The good news is that UFC President Dana White has already acknowledged the mistake.

“We blew it tonight. It should have been a five-round fight,” White said at the outset of the UFC on Fuel TV 1 post-fight press conference on Wednesday.

For 10 minutes, Ellenberger controlled the pace of the welterweight bout, countering effectively when Sanchez moved forward. Perhaps wary of Ellenberger’s power, as well as his own 4-for-31 success rate on takedowns in his previous three fights, the Jackson’s Mixed Martial Arts product remained content to keep the action on the feet.

To his credit, Sanchez survived several powerful shots during that time, including a counter right hand that dropped him in the opening stanza. By round three, “The Juggernaut” appeared to fatigue, and Sanchez capitalized by raining down punches from back mount before Ellenberger finally escaped from the precarious position with seconds remaining in the fight.

Ellenberger demonstrated that he is a strong welterweight with heavy hands, good knees and a solid wrestling base. Sanchez displayed the same indomitable will and iron chin that has allowed him to hang tough in so many difficult fights over the years. In short, after three rounds, both Ellenberger and Sanchez are who we thought they were. Two championship frames would have allowed the world to see something more, perhaps something special and career-defining.

“The fight was changing,” Sanchez’s striking coach, Mike Winkeljohn, told Sherdog.com on Thursday. “Four rounds was all we would have needed -- one more [round].I think Diego would have finished him. I think Jake was getting gassed, and Diego has tremendous cardio.”

Perhaps, but an alternate scenario that has Ellenberger weathering the storm of “The Dream” for two more frames would have been the type of trial-by-fire from which No. 1 contenders are forged. As it was, the Nebraskan did what he was supposed to do within the parameters of a three-round fight. Sanchez, even with the emotion of that final flurry still fresh in his mind, had to agree.

“The decision was correct,” the Albuquerque, N.M., native said. “He won two rounds; I won the other round. That’s a real good reason why main event fights like that, when you get two guys with so much heart that are willing to put it all on the line, need to be five-round fights ... I felt that I was finally getting my momentum, and, going into the fourth round, I think that I would have had the advantage.”

If White had not taken action so swiftly, this would still be the topic du jour. Instead, with the exception of the upcoming Thiago Alves-Martin Kampmann and Alexander Gustafsson-Antonio Rogerio Nogueira tilts, all future main events on Fuel TV and FX are expected to be 25-minute affairs.

Instead, it is the future of the tumultuous welterweight division that remains in question. The final moments of Wednesday’s headliner created enough of a “What if?” groundswell that it is difficult to crown Ellenberger as a clear-cut No. 1 contender, especially since it appears that interim champion Carlos Condit might be willing to wait until Georges St. Pierre returns to full health. Even if Condit decides to take a fight this summer, Ellenberger is not the only worthy opponent. In fact, if Johny Hendricks were to beat Josh Koscheck on May 5, the 28-year-old Oklahoman would have an equal -- if not stronger -- claim to the top contender’s spot.

Ellenberger currently owns a six-fight unbeaten streak with signature wins over Jake Shields and Sanchez. If Hendricks takes care of business in a few months -- by no means a given -- then he will have won eight of nine in the UFC, with notable victories against Fitch and Koscheck, a pair of Top 10 welterweights.

It is easy to point to Ellenberger’s UFC debut, where he lost a contentious split decision to Condit, and anoint him as the top challenger for the interim belt. That logic is flawed, however, since both men have evolved considerably over the past two-plus years. At the moment, Condit’s diverse striking and top-notch conditioning would give him a slight edge over Ellenberger in a five-round contest.

This is a moot point since White and even Ellenberger seem to think that the “Natural Born Killer” will not be stepping into the Octagon anytime soon.

“If I were him, I would wait for GSP,” Ellenberger said on Wednesday. “That’s just my honest opinion. It’s up to him if he wants to fight again, so we’ll see where it goes.”

Either way, Ellenberger has time to see what Hendricks, his up-and-coming welterweight counterpart, does in his UFC on Fox 3 showcase. A win by the former Oklahoma State University wrestler would further muddle the welterweight picture.

While it is unclear exactly what lies ahead for Ellenberger, one thing is certain: his next test should come in a five-round fight.