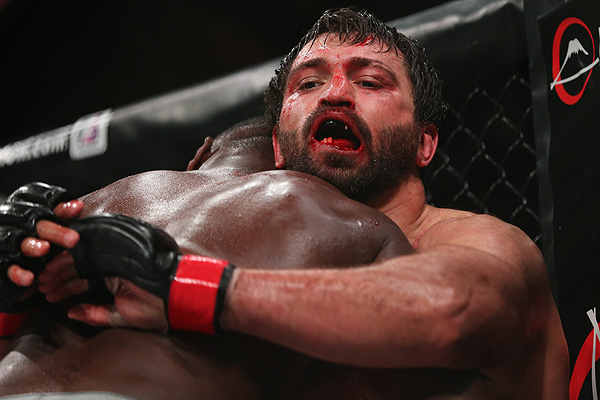 
The true stars of the World Series of Fighting’s sophomore effort did not come with “former” or “onetime” or “previous” attached to their accomplishments.

For fighters like Marlon Moraes and Justin Gaethje, WSOF 2 was all about building their resumes so that one day, they too can eventually ride the coattails of their former selves. You cannot blame the WSOF for following the model it did. On a Saturday with the NCAA Tournament in full swing, fans are not going to tune in to watch bouts based on potential alone.

That is why former Ultimate Fighting Championship heavyweight titleholder Andrei Arlovski and onetime UFC welterweight Anthony Johnson headlined the event at the Revel Resort and Casino in Atlantic City, N.J. They are known commodities that have done some of their finest work on the sport’s biggest stage. Never mind that both men have been the object of derision in recent years, Arlovski for his chin and Johnson for his ever-fluctuating weight.

Both had also scored emphatic first-round knockouts in the promotion’s debut, and a potential bout between the two, one which had never really been previously considered, definitely had a certain appeal. Could Arlovski, unbeaten in his last five outings, continue his resurgence while avoiding the power of his opponent? Could Johnson, 4-0 since being released by the UFC, be as effective without his accustomed size advantage?

In the end, the main event provided about five minutes of real intrigue, culminating in Johnson’s near-stoppage of the Belarusian in the final 10 seconds of the opening frame. From there, it was two rounds of “meh,” with “Rumble” abandoning the standup that had his foe reeling in favor of futile takedown attempts, most of which resulted in restarts by referee Kevin Mulhall as the action stalled against the cage. Meanwhile, Arlovski, perhaps still wary after Johnson’s initial salvo, quietly found his range but was never able to pull the trigger enough to truly sway the momentum in his favor. 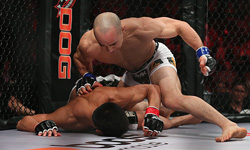 Photo: D. Mandel/Sherdog.com
Moraes’ star is on the rise.
It was exactly the type of matchup that demonstrated why neither man is currently under Zuffa employ. In brief flashes, they can demonstrate why they are marketed as highly regarded former superstars, but in the long run, the consistency is simply not there; and that is OK, because if you made it that far into the broadcast, the WSOF hopes you tuned in to catch the exploits of Moraes and Gaethje, as well.

Yes, the WSOF will receive its fair share of criticism each time it signs a prominent name that has been exiled from another organization.

The Las Vegas-based promotion had to be experiencing at least a twinge of buyer’s remorse as Paulo Filho lay listlessly on the mat while David Branch counted out his punches in a lopsided bout that aired as part of the main card on the NBC Sports Network. Though he was once thought of as one of the world’s top middleweights, the WSOF should have recognized that the baggage accompanying the former World Extreme Cagefighting titlist made him a risky acquisition. Moreover, unlike Arlovski or Johnson, Filho was already so far removed from the mainstream consciousness that he could no longer be considered a selling point for the card.

The Filho gaffe aside, the WSOF seems to be moving in the right direction, assuming it continues to strike the right balance between prospects and once-upon-a-timers. The co-main event saw Moraes, who knocked off Miguel Torres at WSOF 1, take down fellow rising talent Tyson Nam, who made a name for himself last summer by knocking out Bellator MMA 135-pound king Eduardo Dantas. Gaethje, a Grudge Training Center export, was impressive in earning a doctor’s stoppage against Gesias Cavalcante earlier in the evening. Outside of the hardcore fan, not a lot of people knew about Moraes or Gaethje heading into the show, but at least a few more are probably aware of their presence now.

For example, there is no guarantee that recent WSOF signee Jon Fitch, who exited the UFC with his top 10 welterweight ranking intact, will be the same guy who for a time was better than every 170-pounder not named Georges St. Pierre. Age, motivation, money and a variety of other external factors can play a significant role as a fighter transitions from one promotion to another. Just ask Bellator how making Muhammed Lawal the figurehead of its Season 8 debut on Spike TV turned out.

Comparisons will inevitably be drawn between WSOF and Bellator for as long as both companies exist. At the moment, Bjorn Rebney’s promotion is winning the competition for No. 2 organization behind the UFC, thanks in no small part to its presence on the MMA-friendly Spike TV. While Bellator is roundly praised for its ability to develop talent from within, and rightly so, it has also made its share of big-name publicity grabs. If this were not true, then fighters such as Renato Sobral, Brett Rogers and Seth Petruzelli would not occupy roster spots.

If the fates allow WSOF to make it past its first year of existence -- never a guarantee -- there should be less reliance on recycled names and more investment in the likes of Moraes and Gaethje. For now, enjoy the mix of nostalgia and speculation that the promotion provides. One cannot exist without the other.