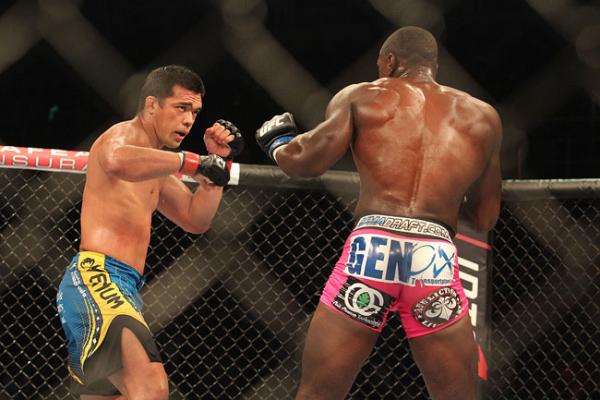 Lyoto Machida wound up on the wrong side of the UFC 163 scorecards. | Photo: Gleidson Venga/Sherdog.com


The walk across the tightrope -- the one where the difference between winning and losing can hinge on any number of subtle intricacies -- has grown increasingly perilous for Lyoto Machida in recent years.

Not all that long ago, Machida was MMA’s unsolvable riddle, an AP Calculus savant in a room full of remedial mathematics dullards. Fifteen bouts into his professional career, the karateka knocked out Rashad Evans to become the Ultimate Fighting Championship light heavyweight champion, and at that moment it appeared that his reign was merely beginning. Getting a handle on Machida’s elusive, confounding movements in the cage was often likened to solving a Rubik’s Cube, except that people were actually known to complete the Rubik’s Cube on occasion.

Do not leave it in the hands of the judges? Hell, for a while Machida did not drop rounds, let alone fights. Then, beginning with a disputed victory against Mauricio “Shogun” Rua at UFC 113, perceptions began to change. No longer was every Machida fight a cakewalk, and as it turned out, his bouts were pretty difficult to score.

Since he defeated Evans at UFC 98, Machida has had his share of highlights in the Octagon -- spectacular knockouts of Randy Couture and Ryan Bader immediately come to mind -- but overall, the Belem, Brazil, native is an ordinary 4-4 during that period.

More and more often, Machida’s fights have resulted in contentious verdicts. Sometimes, he emerged on the right side of the judges’ scorecards; other times, he has not been as fortunate. Saturday was one of the latter, as the former light heavyweight champion dropped a widely panned unanimous decision to Phil Davis in the UFC 163 co-headliner in Rio de Janeiro.

Popular opinion seems to be that Machida was robbed, that Davis was wrongly awarded a decision on the basis of a pair of late-round takedowns despite being outclassed by the Brazilian for the majority of the fight. Those assessments are largely correct, but to lament the faulty judging that cost Machida a potential shot at the light heavyweight championship is to overlook another key point: “The Dragon” already had an opportunity for a return date with reigning light heavyweight champion Jon Jones months ago; and he turned it down.

When Jones refused to face Chael Sonnen on eight days’ notice in September, forcing UFC President Dana White to cancel UFC 151, the promotion boss announced that Machida would face Jones for the 205-pound strap at UFC 152. The only problem was, White had failed to ask Machida if he would be willing to take the fight. It seemed like a foregone conclusion, because chances to win a championship in any sport only come so often. However, Machida did not feel like he would be adequately prepared to face Jones without the benefit of a full camp. As a result, he turned down the matchup, and Vitor Belfort, a converted middleweight, eagerly stepped in to take his place.

“Lyoto just wants to know, whatever happens in a rematch with Jon Jones, that he gave his absolute best performance. Going in there at less than full strength and coming up short could mean Lyoto would be forced to reinvent himself in another division despite believing in his heart that he can still be light heavyweight champion,” Machida’s manager, Ed Soares, told MMAJunkie.com after the Brazilian turned down the fight. “That could be a thorn in his side for the rest of his life, and nobody wants to go through that.”

As it turns out, that reinvention process might have to occur anyway, only without a shot at UFC gold to show for it. Deep down, that should eat at Machida at least as much as the amateurish scorecards that were submitted at UFC 163. Even if Machida’s hand had been raised at UFC 163, there was nothing about his performance that suggested he was suddenly more ready to take down Jones than he was more than a year and a half ago, when he was unceremoniously choked unconscious and dropped to the canvas by “Bones” at UFC 140.

Eking out a split decision over Dan Henderson at UFC 157 was not any more convincing, either. Both the Davis and Henderson fights essentially amounted to a coin flip; some thought Machida won, some thought his opponents won, but nobody walked away feeling especially confident about making the call either way. That is the direction “The Dragon” has been going for quite some time. Sign on to face Machida, and it is a decent bet that he will not allow you to look good, no matter the result. Then again, it is probably safe to assume that he will not look like a world-beater, either.

What made Machida a compelling rematch for Jones was their first round. There, Machida briefly resembled the mystery that so many fighters had struggled to unravel earlier in his career. It was also one of the rare times that Jones wore a look of concern in his corner between rounds. Could Machida have duplicated that first frame for 25 minutes in a rematch with the champion? The smart money says no, but it might have been fun to find out, more fun than it was watching Jones deliver a predictable pummeling to Chael Sonnen in April, at least.

Yes, there was a greater lesson to be learned from UFC 163 than the trite “Don’t leave it in the hands of the judges,” which White and countless others dutifully plugged into their Twitter feeds over the weekend.

Machida was waiting for the perfect time to rematch Jones when, in reality, such a moment did not exist. The closest thing to it was last September, when he refused a short-notice opportunity. Now that perfect time has passed, maybe for good, and Machida has no one to blame but himself.