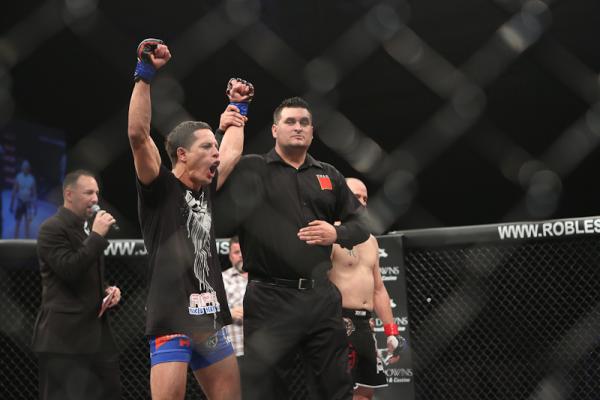 ALBUQUERQUE, N.M. -- With four wins in as many Jackson’s MMA Series appearances, Matt Leyva had established himself as a successful mainstay of the promotion founded by his hometown -- and world renowned -- gym.

Anthony Birchak made sure he wasn’t victim No. 5, as the Apex MMA product stopped Leyva (9-3) in the first round of their featured bantamweight encounter at the Jackson's MMA Series 10 main event on Saturday night.

Birchak (9-1) shocked the vocal throng of Leyva supporters at the Tingley Coliseum by flooring the former United States Marine with a right hand and swarming with a series of unanswered follow-up punches on the ground, forcing referee Richard Espinoza to call a halt to the contest at the 1:22 mark of the opening frame.

It was Birchak’s third victory of 2012, and the fact that it came in front of a decorated ensemble of Leyva’s Jackson’s MMA teammates made it that much sweeter for the 26-year-old Arizonan.

“You got all of these great people right here, dudes that I aspire to be,” Birchak said. “I knew Matt was tough coming in here. Albuquerque don’t like me (right now).”

Birchak took his opponent down twice in bout’s the early going, but both times Leyva was able to return to his feet and respond with solid strikes. Birchak was unrelenting with his pressure, however, and it wasn’t much longer before he found the opening he needed.

“At the end I wanted to change levels. I threw an inside kick, double jab, changed levels and came up with a two -- and I put it right on the chin. After that I just unloaded -- that’s what I do,” he said.

After more than a year away from the cage, Conrad Padilla made a successful return to action with a unanimous decision triumph (30-27, 30-27, 29-28) over Rolando Cespedes (2-2) in the evening’s co-main event.

“It’s been over a year, so I was shaking off the cobwebs bad. I was a bunch of nerves in the back,” Padilla said after the bout. “I tried to do what I could to finish it, but I said, ‘Man, let’s just put on a good show.”

That they did. Padilla controlled most of the opening frame with dirty boxing and ground-and-pound, while Cespedes’ moment of note came when he connected on a spinning-back fist.

Things got more interesting for Padilla in round two. The Jackson’s MMA product had to survive one particularly harrowing moment when Cespedes dropped him with a big left hand and rushed to finish the contest with strikes on the ground. Cespedes then transitioned to a rear-naked choke, but Padilla was able to escape from the maneuver, leaving the Team Tompkins fighter spent from the assault.

Cespedes offered little in the way of offense in round three, while Padilla periodically worked his opponent’s body with effective punches and kicks to seal his fourth victory in as many professional appearances.

Elsewhere, Mike Justus weathered an early assault from Team Tompkins representative Manuel Cespedes to earn a technical knockout victory in the third round of a lightweight conflict.

Cespedes (0-2) rushed his 6-foot-4 opponent at the outset of the bout, throwing haymakers with ill intent and diving into Justus’ guard with furious ground-and-pound. Whenever Justus (2-1) attempted to control distance with a kick, Cespedes countered with power punches and takedown attempts.

The Las Vegas resident could not maintain his frantic work rate for the entirety of the contest. In round two, Justus landed a hard kick to the body early, and continued to punish Cespedes with elbows – both from his back and in tie-ups.

Cespedes’ movement slowed to a near-halt in the final frame, and Justus was eventually able to take his back. The Jackson’s MMA representative was unable to secure a rear-naked choke, but a consistent barrage of strikes forced referee Craig Zellner to stop the bout at the 4:28 mark.

The six-bout amateur card was highlighted by a bantamweight clash between Eric Dodson, the younger brother of UFC flyweight No. 1 contender John Dodson, and Team Wildman protégé Scott Ingram. Quick transitions and timely ground-and-pound would ultimately win the day for Dodson, who captured a unanimous decision (30-27, 29-28, 29-28) over the Coloradoan.

Earlier, Jackson’s MMA’s Jon Sparks starched Team Wildman’s Allen Washington with a head kick, then sealed the deal with a triangle choke from his back 68 seconds into their 150-pound catch-weight clash, while fellow Jackson’s MMA representative George Clynes kept Silver City, N.M.’s Randy Ray Sanchez at bay on the feet to earn a unanimous decision (30-27, 30-27, 30-27) at 155 pounds.