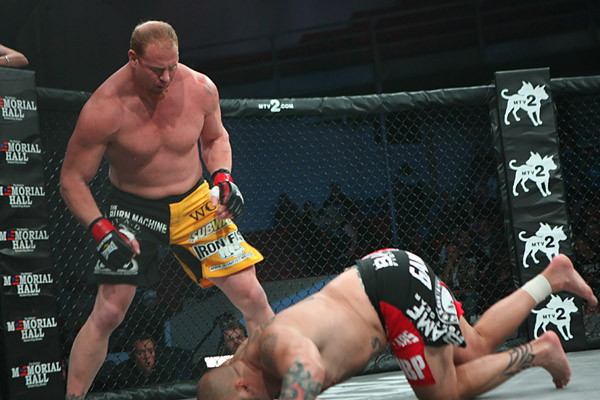 Eric Prindle has been crowned Bellator’s Season 5 heavyweight tournament winner and will receive the next shot at heavyweight champion Cole Konrad.

Promotion officials confirmed the news to Sherdog.com on Friday morning. Prindle was expected to rematch Thiago Santos tonight at Bellator 62 in the delayed tournament final, but Santos came in 11 pounds overweight at Thursday’s weigh-ins.

According to a source close to the bout, Texas Department of Licensing and Regulation and Bellator officials determined that it was not safe for Santos to attempt to cut the extra weight within the allotted two hours, and the bout was canceled. Bellator 62 takes place at the Laredo Energy Arena in Laredo, Texas, and airs live on MTV2 and Epix.

Prindle originally met Santos in the Season 5 finals on Nov. 26 in a bout that was declared a no-contest after “Big Monster” landed a kick to Prindle’s groin. The fighters were expected to rematch last week at Bellator 61, but promotion officials delayed the contest one week after Prindle developed flu-like symptoms and was deemed unfit to compete on the day of the weigh-ins.

Prindle will likely square off with Konrad within three to five weeks, according to one source close to the fighter. Known as “The American Soldier,” Prindle has not lost since dropping his pro debut in May 2008, posting seven consecutive wins prior to his no-contest with Santos. The heavy-handed 35-year-old owns over half of his career wins by knockout and has been to a decision just twice in nine pro outings.

A former two-time NCAA wrestling champion at the University of Minnesota, Konrad has yet to taste defeat in mixed martial arts, posting a perfect 8-0 record since beginning his career just over two years ago. “The Polar Bear” has earned five wins in the Bellator cage thus far, taking out Rogent Lloret, Damian Grabowski and Neil Grove to capture the promotion’s world title in Oct. 2010. Most recently, the 27-year-old bested UFC veteran Paul Buentello in a non-title bout, showing improved standup en route to unanimous verdict last April.