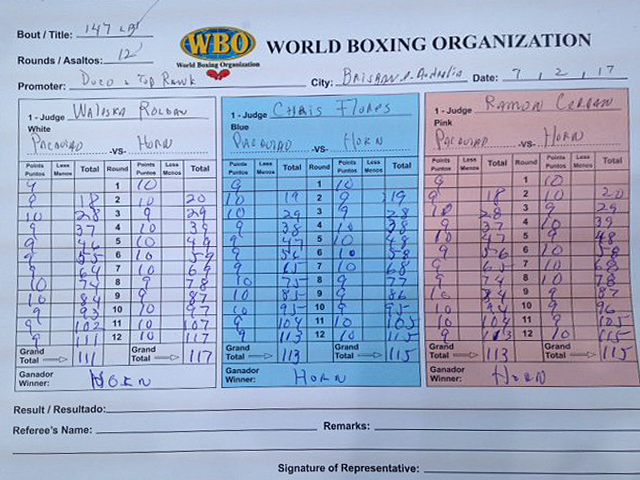 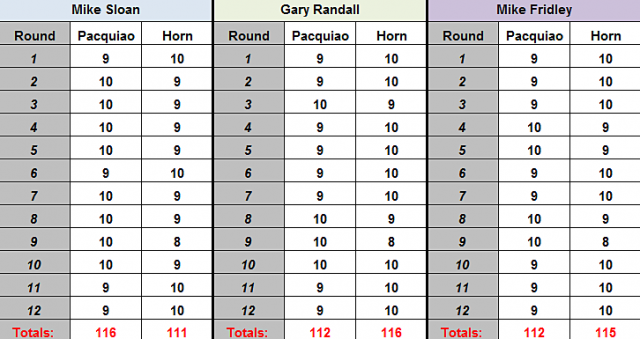 
The running theme of the week that was Jeff Horn was a real-life Rocky, that he was this local kid with no chance to win against an all-time great world champion. But unlike in the original “Rocky” movie, Horn actually walked out of the ring as the winner and new WBO welterweight champion.

Horn (17-0-1, 11 KOs) fought his heart out in front of 55,000-plus rabid fans at Suncorp Stadium in Brisbane, Australia, against Manny Pacquiao, a future Hall of Famer who has captured world titles in a record eight different weight classes. “The Hornet” showed no fear of the Filipino legend as he came after him from the opening bell and made it a rough and tumble affair throughout. Even when a gash was opened above his right eye, the Aussie rarely took a backward step as he forced his larger frame onto Pacquiao every chance he got.

It took Pacquiao a few rounds to get going but when he did, his trademark power was there. “Pac Man” slammed lefts to the body and, more importantly, to the head and by the midway point of the fight, it appeared as though Pacquiao had seized control. Horn was the far busier fighter, but Pacquiao was landing the cleaner, more powerful blows. Horn tied the champion up repeatedly and their heads came together several times, cutting Pacquiao twice.

With the fight appearing to be slipping away from Horn, Pacquiao (59-7-2, 38 KOs) looked like his vintage self in the ninth. “The Hornet” was drilled by a straight left to the face, a punch that buckled his knees. Horn immediately retreated, but Pacquiao was relentless in pursuit of the knockout. “Pac Man” nailed the challenger with vicious shots to the head and body, twice sending the local fighter stumbling across the ring. The beating was so severe that the Filipino nabbed a 10-8 round by nearly all who watched; referee Mark Nelson actually told Horn’s corner that he would stop the fight if he didn’t show improvement.

But by the time the championship rounds come around, Pacquiao’s gas tank was running low and he never gunned for the knockout again, a decision that ultimately cost him. Horn rallied down the stretch and wound up winning a highly questionable unanimous decision via tallies of 117-111 and 115-113 (twice). The ESPN commentary team and social media exploded in debate as soon as Horn was declared the winner; Pacquiao said he would enact the rematch clause in the contract and fight Horn again later this year.


In the ESPN-televised co-feature, IBF junior bantamweight champion Jerwin Ancajas was stellar in retaining his title, which he did via seventh-round knockout of Teiru Kinoshita. The Japan-based Korean suffered a cut over his right eye in the second and Ancajas (25-1-1, 17 KOs) targeted that side of his head throughout. “Pretty Boy” systematically broke him apart and then levelled his challenger with a brutal right hook to the body, folding him in half. Kinoshita (25-2-1, 8 KOs) beat the count, but the referee knew he was finished and ended the fight at the 1:53 mark of the frame.

2012 Irish Olympian featherweight Michael Conlan improved to 3-0 with his third knockout when he clubbed overmatched Jarrett Owen (5-5-3, 2 KOs) out in the third. Conlan hurt his foe and then swarmed him with punches until Owen’s corner threw in the towel. The end came at 1:56 of the third.

In the opening bout of the telecast, middleweight prospect David Toussaint (11-0, 8 KOs) out-slugged Shane Mosley Jr. for eight rounds to win a split decision. The fight was action-packed from start to finish, but Toussaint landed the more telling blows in the contest. One judge had it 77-75 for Mosley (10-2, 7 KOs) but that score was overruled by scores of 77-76 from the other two judges.
« Previous Manny Pacquiao vs. Jeff Horn Results, Round-by-Round Scoring & Play-by-Play Next Boxing’s Greats of the States | Washington: Tiger Jack Fox »