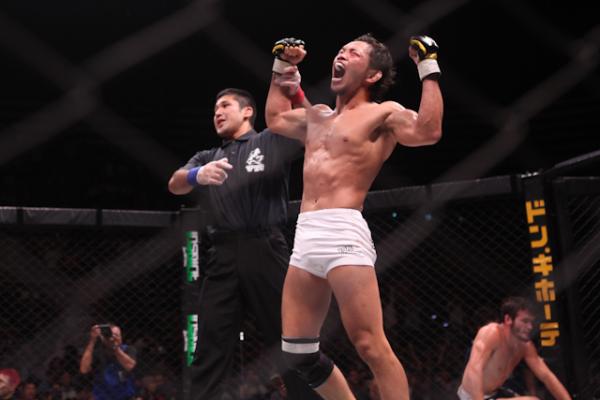 Late in his career, Caol Uno is on a roll at 145 pounds. | Dean Marchand/Sherdog.com


Japanese veteran Caol Uno will return to action later this month to face American Jesse Brock inside the cage of the Shooto-affiliated Vale Tudo Japan.

The matchup, announced Monday by promoter Sustain, will be part of the main card of “VTJ 4th,” which takes place Feb. 23 at Ota City General Gymnasium in Tokyo.

Uno fought and won three times in 2013, a feat the 38-year old had not managed since 2006. The onetime UFC lightweight title contender is 4-3 since dropping to featherweight in 2010. His opponent, Idaho’s Brock, moves up from bantamweight for the bout. A training partner of Scott Jorgensen, Brock has won six of his last eight, including his most recent bout under the Bellator banner in October.

The event will also feature the opening round of Vale Tudo Japan’s eight-man 2014 flyweight tournament. Shooto world champion Ryuichi Miki goes up against former Deep and Pancrase ace Yoshiro Maeda in the quarterfinal round, while longtime 125-pound ranker Mamoru Yamaguchi takes on Czar Sklavos, and Hiromasa Ogikubo meets Takeshi Kasugai. At least one American will advance to the semifinals, with Hawaiian Kana Hyatt and Idahoan Freddy Arteaga clashing in the round of eight.

The semifinal and final rounds of the tournament are expected to take place at two as-yet-unannounced events later this year.

Other noteworthy competitors on the bill include 2010 Shooto rookie champion Yuta Sasaki, who faces once-beaten Teruto Ishihara, and grappling ace Naoyuki Kotani, who puts his 12-fight winning streak on the line against Yoshihiro Koyama.