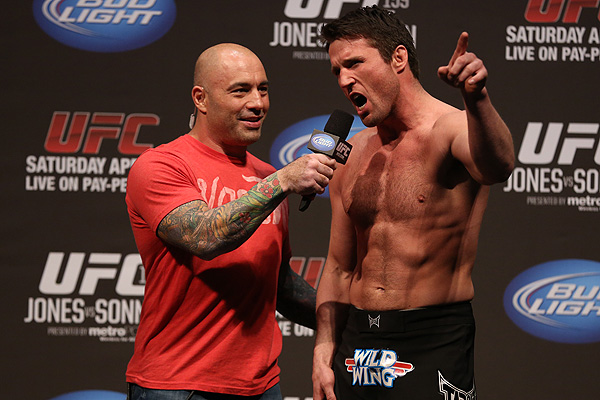 Chael Sonnen has produced some of the best sound bites in MMA, and after his win Saturday over Mauricio “Shogun” Rua, he delivered another classic post-fight speech while calling out Wanderlei Silva.

Later that night he joined the Sherdog Radio Network’s “Rewind” show to discuss the art of the interview with host Jack Encarnacao.

On whether his inspiration for interviews comes more from Len Denton or Billy Graham (both pro wrestlers): “You’ve got to understand everybody comes from Billy Graham. So I think my answer was going to be Len Denton, but I’m sure if Len told the truth, he got inspired by Billy too. Billy Graham actually put a Facebook post out. I had paid homage to him after a fight some time ago, and he appreciated that. Because he appreciated it, I paid him homage again tonight.”

On whether he prepares for post-fight interviews: “I don’t know that I do. Joe Rogan usually talks to me, but I remember, I fought in the UFC four times before Joe ever talked to me. I was so happy to be interviewed. I even told him that. I said, ‘Joe, I’ve fought here for two years now. [This is] the first time you’ve ever spoken to me.’ So I don’t know that there’s a lot of preparation. … I don’t know that I’ve planned it out before. I don’t know if that’s an entirely sincere comment, but I can’t remember planning one out.”

On whether his finest post-fight interview was when he called out Anderson Silva after beating Brian Stann: “Absolutely. That’s got to be the one. … Charles Barkley came up to me afterwards and he liked that one.”

On why that one was so good: “Anderson was there, so I got a reaction. That’s really what you’re after. You want to evoke some type of emotion, especially if you’re calling a guy out. That’s the whole point. You want him to respond. That’s how you get a fight going. It’s no different than when you’re kids in school. If one guy says something to another guy and the other guy just sits there, then well, you kind of feel bad for the guy. I don’t want to see a guy get bullied. But if the other guy goes, ‘Oh, really? You talking to me?’ Well, now you’ve got something to watch. That rule applies here in professional fighting too. It’s the same rule as from the playground.”

On Silva’s reaction: “I was just glad he was there and he saw it. I was sticking my finger in that guy’s chest. It wasn’t just a lesson to Anderson to say, ‘Hey, I’m not going away.’ It’s a lesson to the other chickens in the back too. There’s so many guys that are so scared to ruffle any feathers and they want to blend in. It’s like, guys, listen. Don’t ask Anderson Silva for his autograph if you’re a fellow fighter. Don’t go around kissing his ass. You can’t walk around being scared of guys if you want to replace these guys. If you want to be the champion, you can’t be in awe of champions. They’re just people too. Anderson’s got two arms and two legs. He doesn’t get to bring anything into that cage that I don’t get to. Sometimes I feel like a big brother to these guys that’s got to let them know we’re in the fight business. If you want a fight, ask for a fight.”

On whether the UFC should hire a promo coach to help fighters do better interviews: “No, definitely not. It’s got to be from the heart and it’s got to be real. I would never manufacture conflict. That’s a very important statement. When I talk about big brothering guys, that’s probably lesson number one: Do not hype a fight. If you have an issue, if you have a reason and it’s sincere, feel free to speak about it. Do not make it up and don’t just cut something for entertainment. Post-fight’s a little bit different because then you’re not selling anything. If you’re just talking to a crowd, and tickets and pay-per-views aren’t on the line, that’s totally different. … I don’t like anything that’s manufactured. If it’s not real, I’m not buying it.”

On why that’s important: “I’ve always liked to visit with people. I’ve always liked to talk and socialize, meet somebody and carry on, so I don’t know that I have necessarily a code as it comes to that. I really just have one rule, and that is, if you don’t mean it, don’t say it. There is an entertainment aspect for that, but that’s not what we do here and I don’t want to sell anybody anything that isn’t real. I’ve bought it. I bought Mike Tyson versus Lennox Lewis and listened to Tyson apologize afterwards, say he didn’t mean it. I go, ‘Well, then give me my money back. You’ve got to return my money. That was a lie. I bought this on a lie.’ I watched Josh Koscheck and [Georges] St. Pierre, and Josh Koscheck grabbed the mic and said [he] didn’t mean it. Josh, you’re a liar then. There’s 11,000 fans that bought a ticket because they thought that they were going to see a dispute settled. … It bothers me. It’s insincere. I won’t participate in it.”

Listen to the full interview (beginning at 45:33).