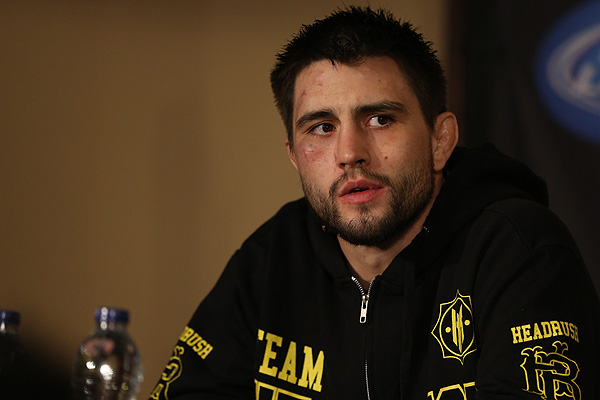 Carlos Condit would not mind finding himself in another rematch.

Following his fourth-round knockout of Martin Kampmann in the UFC Fight Night 27 headliner, the former UFC interim welterweight champion indicated his interest in trying to even the score with either of the men who handed him his most recent defeats.

“I’d like to rematch both [Georges St. Pierre and Johny Hendricks], but I’m kind of leaning toward Johny because our fight was so close,” Condit (Pictured, file photo) said at the post-fight press conference. “But then, I came real close to a finish in my fight with Georges, so it’s tough [to say which rematch I want more].”

Condit first faced Kampmann in 2009, dropping a split decision to “The Hitman” at UFC Fight Night 18. However, “The Natural Born Killer” exacted his revenge on Wednesday night at Bankers Life Fieldhouse in Indianapolis, as Condit outworked the dangerous Dane after weathering an early slew of takedowns.

In the second, third and fourth rounds, Condit shook off the majority of Kampmann’s takedown tries, a fact that he attributes to his renewed focus on wrestling ahead of the fight.

“Martin is a very well-rounded fighter. I knew that [my takedown defense] was something I’d have to work on quite a bit,” said Condit. “I worked with Izzy Martinez, Ricky Lundell and Jake Herbert, who was a 2012 Olympian, and I was able to defend some takedowns I most likely would not have been able to had I not worked with those guys.”

As he prevented Kampmann from taking the fight to the floor, Condit turned up the heat standing, gradually increasing his work rate to batter and bloody his opponent in round three. Kampmann wilted under Condit’s blistering pace, and eventually the New Mexican found his foe’s chin in round four, catching Kampmann with a sharp combination that signaled the fight’s conclusion.

“Range is very important, and once I found my range, I was able to start landing. Kampmann is a kickboxer, and that’s a comfortable range for me,” said Condit. “The last two guys I fought were wrestlers, and they able to close that distance. And Martin was actually able to close distance as well, so it’s always a work in progress.

“I trained harder, and I was more focused [for this fight]. I didn’t let the thought of my last fights consume me, but I used the mistakes in those fights as teaching tools. I was really motivated to improve in those aspects of the game which I was lacking.”