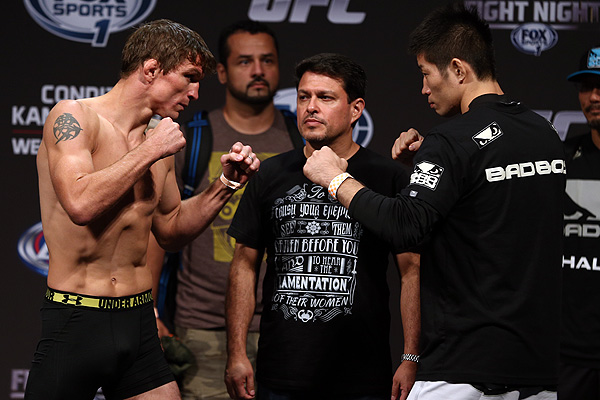 Darren Elkins survived an early scare to pick up arguably the biggest win of his career against Hatsu Hioki at UFC Fight Night 27.

Fighting in front of his fellow Hoosiers at Bankers Life Fieldhouse in Indianapolis, Elkins found himself on the receiving end of several front kicks to the body in the first round. Though the technique at first appeared to serve as a simple range-finder for Hioki, it soon became clear that the former Sengoku champion had hurt Elkins with the precise strikes.

“He hit me maybe three or four times, and the first one didn’t really affect me, but after the third one, it was really starting to affect me,” Elkins said at the post-fight press conference. “I was almost doing a crunch standing up, so I [went into] a little bit of a panic mode, and I did a little grappling and hung on. When I came out for the second round, my breathing was going better for me.”

Elkins used his second wind to take control of the fight, scoring takedowns against the lanky Japanese talent and grinding him down for the majority of the third frame en route to a unanimous decision victory.

“Tonight was a more exciting fight, but I still have to work on finishing. Obviously, when you finish, you get more publicity, but Hioki is a tough guy who’s never been finished. I tried to push the pace and put it on him, but he’s really technical, so it was tough to do that.”

The triumph marks Elkins’ sixth win in his last seven fights, with his only loss coming to former title contender Chad Mendes this past April at UFC on Fox 7. Though Elkins took that fight on just a month’s notice as an injury replacement for Clay Guida, the featherweight does not regret stepping up to face Mendes, though it cost him his perfect record at 145 pounds.

“I don’t look at it as setback,” said Elkins. “It was an opportunity to fight somebody most people didn’t want to fight. I’m a guy who fights anybody [the UFC] gives me. I was healthy, and if I had beaten Mendes, it would have put me right in the title picture. Instead, I got knocked out, but I learned from it, and I’m gonna try to get better each fight.”