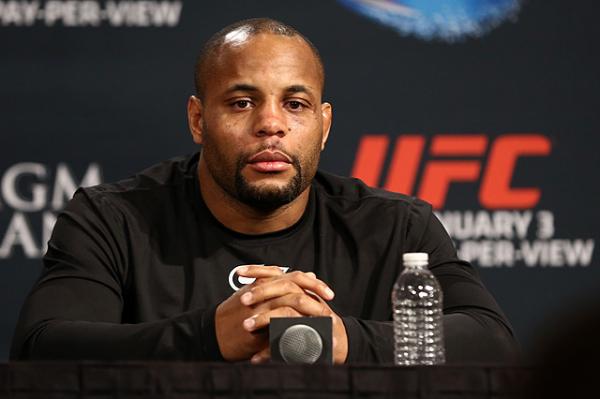 Daniel Cormier had to admit defeat after a five-round loss at UFC 182. | Photo: Dave Mandel/Sherdog.com


Daniel Cormier suffered the first loss of his mixed martial arts career against Jon Jones at UFC 182 on Saturday, missing his chance to claim the UFC light heavyweight championship.

The former Olympian had his share of moments over the course of 25 minutes, but Cormier couldn’t manage to get the better of Jones in most situations. In the end, all three judges scored the fight 49-46 for “Bones.”

“I worked so hard to try to accomplish this goal and it didn’t happen. I could have fought better. My manager and coach told me that generally I fight better inside of the cage than I do in practice, and today I didn’t do that,” Cormier told Fox Sports after the fight. “He was better today, you know? He beat me. He won the fight. He’s obviously the champion for a reason and he showed it tonight.”

Cormier pointed out Jones’ size as one of the reasons for the loss, claiming the 27-year-old seemed bigger once the two were actually locked up in the clinch. The former heavyweight fighter also regretted his performance in the fourth round, a frame that all three judges awarded to Jones.

“I think we were well prepared for what he was doing. If anything surprised me, he felt a little big in the clinch,” Cormier explained. “In the fourth round, I kind of took that round off, and I wish I would have competed better. I didn’t fight to my potential in that round.”

At that stage in the fight, cardio could become an issue against a fighter with as heavy of an offensive output as the incumbent champion. But Cormier was pleased with his pace and what he had left in the tank heading into the championship rounds. The bout was only the second time Cormier had gone the full 25 minutes, the first instance coming against Josh Barnett at Strikeforce “Barnett vs. Cormier” in 2012.

“My cardio was fine. I felt OK. Obviously, over the course of a five-round fight, you get tired, especially with the pace that we set early in the first round and the second round. It was very high, a lot of in-fighting, which is tough,” Cormier said. “For the first time in my career, I was actually absorbing damage as the fight was playing out. It slows you down when you’re taking damage.”

The American Kickboxing Academy member had nothing but praise for the gameplan of Jones, crediting the effort “Bones” put towards working over his body with punches and knees. In all, FightMetric statistics showed that Jones landed 34 significant strikes to the body.

“He landed a really good knee or something back in the first round that kind of got my rib real good, and I can feel it. He did a great job of punching to the body. First he was hitting me with a left body shot right on my rib,” Cormier said. “As the fight progressed, he changed it to more of a straight punch to my rib -- every time he hit me with it I could feel it take some energy out of my body.”

It’s back to the drawing board for Cormier, who must now work his way back up the 205-pound ranks to challenge Jones. After months of negative comments from both parties, Cormier finally acknowledged the fact that his foe is the best and soundly defeated him in the main event of the first UFC pay-per-view of 2015.

“I just couldn’t find my rhythm tonight,” Cormier said. “Jon is the best for a reason and he was the better man tonight.”