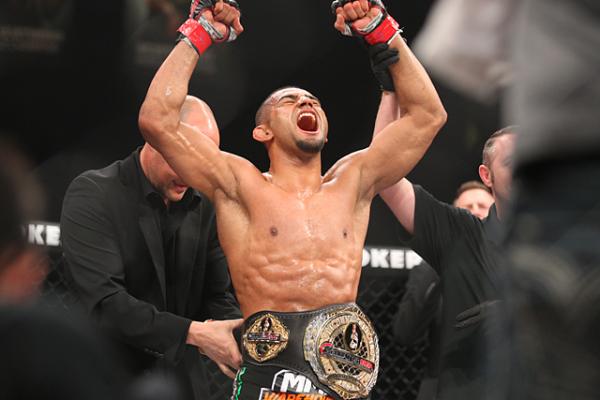 
One year after winning the vacant Bellator MMA welterweight championship, Douglas Lima has a date and an opponent for his first title defense.

Lima will put his belt on the line against Andrey Koreshkov in the five-round main event of Bellator 140, the organization announced on Monday. The newly announced show takes place July 17 at Mohegan Sun Arena in Uncasville, Conn.

No other matchups have been announced for Bellator 140, though it appears the company plans to load the event with more 170-pounders.

“When the rest of this card is announced, we’ll have put together one of the greatest showcases of welterweight talent ever assembled on one night,” Bellator President Scott Coker stated in a release.

Lima conquered Bellator’s Season 8 welterweight tournament with a trio of wins in 2013, and then stopped Rick Hawn with second-round strikes in April 2014 to win gold. The 27-year-old was slated to defend his belt against Paul Daley at Bellator 134 before Lima withdrew from the bout due to a knee injury.

While Bellator no longer uses tournaments to determine contenders, Koreshkov will get to cash in on the title shot he earned by running the company’s Season 10 welterweight bracket. The 24-year-old Russian striker will also be returning to action at Bellator 14 after nearly one year on the sideline.

Lima and Koreshkov have suffered only one loss each under the Bellator banner, and both came in title bouts against the same man: ex-Bellator champ and current One Championship titleholder Ben Askren.