A man who had been urged by many to drop to 145 pounds ended the reign of the sport’s most dominant lightweight Saturday in the co-main event of UFC 112 at the Ferrari World Concert Arena in Abu Dhabi, United Arab Emirates.

Frankie Edgar used his speed, movement and a pair of takedowns, as he outpointed B.J. Penn to capture the lightweight crown. Scores were 50-45, 48-47 and 49-46, all in Edgar’s favor, as he authored what will undoubtedly go down as one of the biggest upsets of 2010. The decision seems certain to inspire debate in the mixed martial arts community.

“This is it. B.J. is the greatest lightweight ever, and I just beat him,” Edgar said. “I just hope I can be half the champion he was.”

Penn, bearing bruises under both eyes, seemed resigned to defeat as he awaited the decision from the judges. The 31-year-old Brazilian jiu-jitsu black belt had not lost as a lightweight in more than eight years.

Edgar grounded the Hawaiian with authority and punctuated his stunning triumph with a strong fifth round. There, he consistently beat the champion to the punch and stayed out of danger. Edgar, who has won four in a row, utilized feints and a multipronged stand-up attack throughout the competitive five-round encounter. Penn landed the more powerful punches but never shook the challenger, who appeared unfazed by the pound-for-pound great’s considerable aura. Penn again relied heavily on his stiff left jab and flurried late, but he seemed to slow noticeably after chasing Edgar for the full 25 minutes. 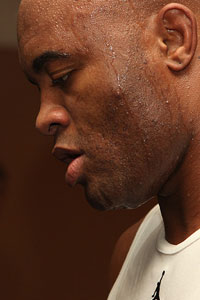 Anderson Silva looked very much like a man who has grown bored with his profession, as his latest outing devolved into the theater of the bizarre.

The promotion’s longest-reigning champion attacked for two rounds and then disengaged from the fight, mentally and physically, as he posted a unanimous decision victory over Demian Maia in the UFC 112 headliner. Scores were not announced.

Unbeaten in 11 UFC appearances, Silva spent as much time clowning and taunting as he did competing, even with a potential box office blockbuster matchup against welterweight king Georges St. Pierre on the immediate horizon. Boos and chants of “Maia” and “GSP” rained down upon the embattled champion, who has drawn criticism for similar disjointed efforts in the past. Silva seemed disinterested at times, disgusted with Maia at others. The performance was eerily reminiscent of his April 2009 title defense against Thales Leites.

“Demain actually surprised me with some of his punches, and I apologize to everybody,” Silva said through his translator, Ed Soares. “I don’t know what got into me tonight. I wasn’t as humble as I should have been. It was just the ring rust and a little bit of everything. I’m really sorry.”

Silva -- who appeared as if he could have ended the match at a moment of his choosing -- battered Maia for the first 10 minutes, as he popped him with powerful leg kicks and dropped him with a beautiful flying knee. From the third round forward, however, he did little more than circle the challenger, which resulted in referee Dan Miragliotta threatening to take away a point in the fifth round.

Overmatched and outgunned, Maia did all he could to keep the fight interesting. He even resorted to punching from his knees in the fifth.

Former UFC welterweight champion Matt Hughes used a steady stream of leg kicks to chop down Renzo Gracie en route to a technical knockout 4:40 into the third round.

After an uneventful first period, Hughes went to work on Gracie’s lead leg. He landed 18 thudding low kicks over the final two rounds and methodically chipped away at Gracie’s pride and resolve. By the time the third round rolled around, the two-time Abu Dhabi Combat Club Submission Wrestling World Championships winner could barely stand.

Hughes knocked down Gracie four times in the final period, twice with leg kicks. With the Brazilian wilting, Hughes zeroed in on the finish. He peppered Gracie with a pair of left jabs against the cage and hammered him with a three-punch combination that forced referee Herb Dean to intervene with just 20 seconds to go.

“I was actually pretty happy,” said Hughes, who joins Japanese legend Kazushi Sakuraba as the only men to defeat both Renzo and UFC hall of famer Royce Gracie. “I knew Renzo came in throwing wide, looping, strong punches, so I tried to stay in tight, move away and do things real simple. Fighting a Gracie, somebody like Renzo, I have to put the odds on my side.”

Fighting for the first time in more than three years, the 43-year-old Gracie succumbed to strikes for just the second time in his career.

“It was very hard,” Gracie said. “I [went] two years and a half without training at all. Then I got six months and I have a tough guy like Matt Hughes to fight; it wasn’t an easy task.”

A decorated Brazilian jiu-jitsu black belt, dos Anjos weathered an attempted guillotine choke for more than a minute in the first round and reversed to top position in a scramble. There, he was warned for delivering knees to Etim’s spine, as the referee returned the two men to their feet. Etim finished a competitive opening round on top but failed to exact much damage.

Dos Anjos seized control in the second period, as he ate a knee from the clinch before scoring with a takedown. Etim never regained his footing. Dos Anjos worked over the 24-year-old Team Kaobon standout on the ground, passing deftly to side control and landing a series of short elbows to the head. Dos Anjos later mounted and moved to the North-South position, where he transitioned to the fight-ending armbar.

Nearly finished inside the first round, the resilient Mark Munoz roared back from the brink and stopped “The Ultimate Fighter” Season 3 winner Kendall Grove with savage second-round ground-and-pound. Grove met his demise 2:50 into round two.

Wielding a six-inch height and eight-inch reach advantage, Grove had Munoz on the proverbial ropes for much of the opening period. He dropped Munoz with a right uppercut and battered the two-time collegiate All-American wrestler with hammerfists against the cage while Munoz desperately clung to a single-leg. Grove then unleashed his submission game, as he threatened with an anaconda choke and a pair of modified guillotines, his long arms tightening around Munoz’s thick neck. Still, Grove could not put away the 32-year-old father of four.

“Man, yeah, I was [in trouble],” Munoz said. “But you know what? You have to have will to survive in the cage, and that’s what I have. I want to make it to the top, and that’s what you need in order to be a champ.”

Grove delivered a crackling knee to the side of Munoz’s head to open round two and briefly seized back control. However, Munoz freed himself, moved to a dominant top position and let loose with a flurry of powerful blows that had Grove cradling his face in his hands.