NORFOLK, Va. -- At M-1 Challenge 24, Russians ruled much of the night, but in the main event, it was Jose Figueroa who was able to placate an anxious crowd at the Ted Constant Convocation Center with his victory over Artiom Damkovsky to claim the promotion’s lightweight title.

Figueroa, 26, was able to use his well-rounded MMA skills to stifle the Russian, which was his plan going into the fight.

“I like to mix everything up. With this guy I wanted to strike and use takedowns,” Figueroa told Sherdog.com after the bout. “He had a little better hands than I expected.” 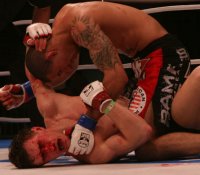 M-1 Global
Figueroa pounded Damkovsky.
Damkovsky attempted to land low kicks, but the Belarusian was countered time and again by Figueroa’s jabs and crosses. Late in the first round, the American Top Team Orlando product put Damkovsky on the canvas, where he was able to work his ground-and-pound to batter the champion. His brutal punches actually knocked the mouthpiece out of Damkovsky’s mouth at the conclusion of the first round.

Figueroa continued his dominance on the ground in the second round. After taking top position again, Figueroa further split Damkovsky's face open with barrages of left hands. Figueroa took full mount and pounded away on the bloodied champion, who thrashed beneath him.

Referee Todd McGovern implored Damkovsky to defend himself, but the fighter offered little response to the referee's instruction. McGovern halted the bout at 2:28 of the second frame, drawing an irate response from his corner, but ultimately having made the right call.

Following the bout, Sherdog.com confirmed with M-1 Global representatives that Figueroa will defend his M-1 Challenge lightweight title on July 8 against Germany's Daniel Weichel at M-1 Challenge 26, at a yet-to-be-determined venue.

In his second crack at the M-1 Challenge middleweight title, Dagestan's Magomed Sultanakhmedov laid a beating on Team Quest's Tyson Jeffries to claim the vacant throne. Although "White Wolf" expected Jeffries to attempt to work his offensive wrestling, Sultanakhmedov quickly changed his strategy to exploit his opponent's exposed legs.

“I was expecting [Jeffries] was going to take it to the ground. After the first round, my trainer gave me the advice to use [my low kicks] and things opened up for me," Sultanakhmedov told Sherdog.com after the bout. 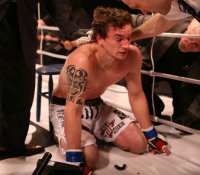 M-1 Global
Jeffries was crushed to the body
by Sultanakhmedov.
A large red welt began to appear over Jeffries’ liver midway through the first round. The 26-year-old Sultanakhmedov sensed this, and began to viciously attack his opponent’s midsection with a constant barrage of thudding body kicks and punches.

“That’s my secret punch. I left my mark,” the new champion smiled when asked about his body attack.

Jeffries would not be put away so easily, however. Sultanakhmedov absolutely crushed him with a wide array of punches, kicks, and uppercuts in the second round. Jeffries attempted to bring him to the ground, but was met only with uppercuts to the face from the clinch.

Jeffries’ heart could only last so long; in the second round, he was nailed first with a brutal head kick and then with vicious knees to his already damaged liver. Referee Scott Oats finally stepped in after the defenseless Jeffries took a half dozen knees to the liver and chin that dropped him to all fours, officially calling the bout at 3:07 of the second round for the new champion.

The 22-year-old Sarnavskiy showed improved, stellar takedown defense as Baker repeatedly sought a takedown against the ropes. Sarnavskiy's wrestling-heavy focus in training paid off, as he defended all of Baker's takedowns, allowing him to open up with his striking. 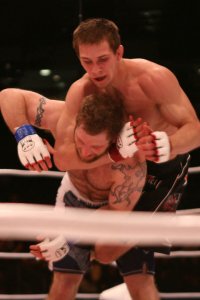 M-1 Global
Sarnavskiy strangled Baker.
Sarnavskiy peppered his opponent with jabs, kicks, and uppercuts from the clinch, dominating the early proceedings. Midway through the second round, Sarnavskiy connected with a series of vicious knees.

“I kicked him a few times and saw that he couldn’t breathe, so I jumped," Sarnavskiy told Sherdog.com after the bout.

As soon as he smelled blood, Sarnavskiy pounced and jumped on Baker’s back. He was able to sink in a swift rear-naked choke as the two fighters hit the mat. Even without his hooks in, Baker couldn't shake the Russian off and was forced to tap, ending the fight at 2:32 of the second round.

"The Ultimate Fighter" Season 8 light heavyweight runner-up Vinny Magalhaes made short work of previously unbeaten Jake Doerr, punching him out at 1:47 of the first round. Magalhaes got an immediate takedown, flurried on the La Crosse, Wisc., native, and passed to full mount. Magalhaes initially looked for a rear-naked choke and an armbar, but instead opted to punch away until referee McGovern intervened.

Unbeaten 135-pound Bethany Marshall displayed her slick groundwork, submitting Stacy Grant with a toe hold at 1:49 of the second round. Grant was in constant danger whenever she was locked on the mat with Marshall. In the first, Marshall threatened with multiple armbar attempts and a triangle attempt to end the round. In the second round, Marshall dove for two leglocks and connected on her second attempt, using a tight toehold to coax the tap. 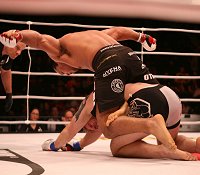 M-1 Global
Magalhaes dominated Doerr.
Jessie Riggleman of Harrisonburg, Va., survived two standing guillotine attempts to sink in one of his own on Jason Hilliker at 3:13 in the first round of their bantamweight affair. Riggleman was able to counter the guillotine attempts with two vicious slams to the canvas. Once he gained top control, he was able to work both the head and body to soften his opponent before swiftly taking mount and locking in a slick guillotine that forced Hilliker to tap.

The only heavyweight bout of the night ended with fast fireworks, as Johnny Curtis threw a vicious uppercut to the stomach of Bobby Gurley. The smack of Curtis’s fist against Gurley’s belly could be heard throughout the entire arena, and referee Scott Oates waved the bout off at just 36 seconds of the first frame.

U.S. Army captain and Bronze Star recepient Jason Norwood used his powerful wrestling to ground Mojo Horne. The Ft. Sill, Okla.,-based middleweight took Horne to the mat repeatedly over their 15 minutes in the ring, claiming side mount and full mount in a dominant grappling display to take three 30-27 scorecards.

Welterweight Colton Smith of Manassas, Va., overwhelmed Brian Nielson, using his wrestling to work Nielson to the ground and dominate. After steady ground-and-pound, he was able to secure a rear-naked choke at 4:19 of the first round.

A lightweight scrap between George Sheppard and David Derby ended unceremoniously at 1:50 in the first round. Derby looked to have injured his ankle after catching a short punch from Derby. Sheppard flurried with punches on his injured foe to get the stop. Derby stayed on the canvas for several minutes after the fight.