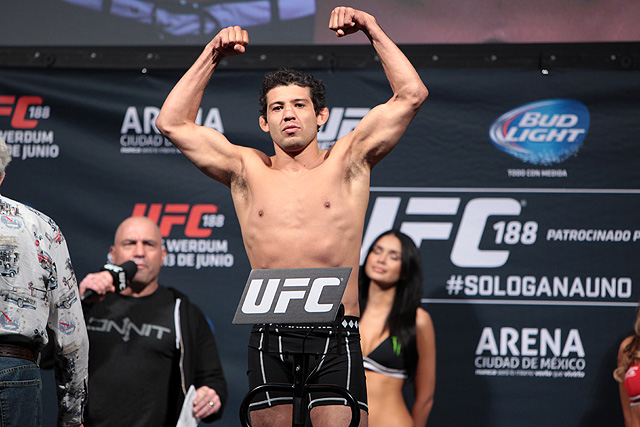 Gilbert Melendez will be out of action until June 2016. | Photo: Dave Mandel/Sherdog.com

Melendez, 33, tested positive for “exogenous origin of testosterone metabolites,” according to a release issued Monday by the UFC. The former Strikeforce champion went three rounds with Eddie Alvarez in Mexico City on June 13 and came up on the losing end of a narrow split decision.

UFC conducted its own drug testing for the pay-per-view event, as the organization does when it visits locales without athletic commissions. The year-long suspension, retroactive to the date of the bout, comes as a result of Melendez violating the UFC Fighter Conduct Policy and Promotional Agreement.

Consequently, Melendez has been pulled from his scheduled July 15 matchup with Al Iaquinta at UFC Fight Night “Mir vs. Duffee” in San Diego. The promotion is currently seeking a replacement opponent for Iaquinta.

In a statement issued by the UFC, Melendez acknowledged the test result but denied knowingly using banned substances.

“Regrettably, I tested positive in my post fight urine sample for UFC 188,” Melendez said. “I did not inject anything, but I am responsible and accept the consequences for the results. I will make sure I am better educated about the products I use and their implications. Going forward I will ensure no products I use will contain banned substances. I am sincerely apologetic to everyone who supports me, including my fans, sponsors and the UFC. I value your trust and respect and will do everything in my power to keep it.”