SEINAJOKI, Finland -- Diego Gonzalez silenced the rowdy crowd in the main event of Botnia Punishment “X” as he scrambled to a submission win against popular home-town favorite Jarkko Latomaki in the first round.

Botnia Punishment returned to the smaller Rytmikorjaamolla venue, a club usually reserved for intimate rock shows, to highlight one of its best matchups of the promotion’s existence.

Latomaki looked to have the upper hand early, as he forced Gonzalez to the cage and secured a takedown. The Team Botnia Punishment/Shooters MMA fighter continued to look for opportunities from the top as he controlled the Swede.

The crafty grappler was able to scramble off of his back to neutralize the advantage. The two fought for position, looking to control each other’s legs. The Hilti-trained fighter ended-up torquing his opponent’s foot, leaving Latomaki with no choice but to tap to the toe hold 4:26 into the bout. The Finn sat in disappointment after the match after seeing a two-fight winning streak come to an end.

“I learned that move from Omar [Bouiche] when I was 14,” said Gonzalez following the bout.

Coming off of two losses and knee surgery late last year, Gonzalez is again back on the winning track. Once the winner of eight straight fights, the Swede joked that he may have considered retirement had he lost three in a row.

The bout was held at a catch-weight of 165 pounds, as Gonzalez looks to make his way down to lightweight. 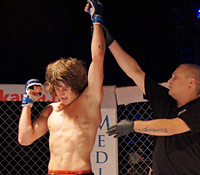 Nicknamed “Scraps,” Saville came to do exactly that as he stepped into the cage on just 10 days notice and showed flash with a variety of circus-show kicks.

Although “Moon Lee” was able to bring the bout to the ground with takedowns in the second and third rounds, the standup battle was leaning more and more to the Cage Steel product as the bout wore on.

Saville improved his record to 9-3 with the win.

Local squad Team Botnia Punishment made a run of three straight victories to the delight of the packed house: Olli Jaakko Uitto rear-naked choked France's Manuel Sully at 3:21 of the opening period; Johannes Isaksson scored a unanimous decision over Filip Macek; Glenn Sparv knocked out Jan Doskocil at 2:14 into the first.

In other action, Tommi Marttinen submitted Juhani Aho with a first-round triangle choke at the 2:41 mark and Tuomas Gronvall and Samuel Muuronen fought to draws against Timo Suihkonen and Daniell Winiarcyck , respectively.