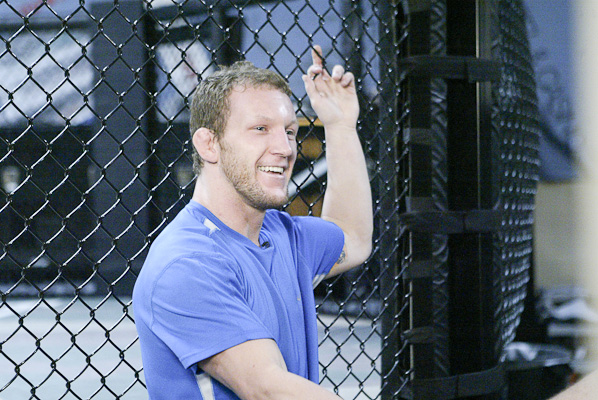 Gray Maynard did not get what he was expecting on Friday night.

Though the former UFC title challenger edged Clay Guida in the main event of UFC on FX 4, Maynard (Pictured, file photo) spent much of the five-round bout attempting to deal with Guida’s near-continuous movement. In the past, “The Carpenter” has been known as one of the lightweight division’s most exciting and aggressive competitors, but such was not the case Friday at Revel Atlantic City in Atlantic City, N.J. Instead of pressing the action, Guida used his renowned conditioning to stay out of Maynard’s range and attempt score with bursts of offense, while Maynard continually tried to cut off the cage with little success.

“He had a little plan, and I tried to scrap it up. You can’t [throw two punches] and then move all the way across [the cage], you know? [You should take] two or three steps, and then [get] back to the action,” Maynard told Fox Sports following the bout. “I would chase him all the way across [the cage], then he’d go back across. You can’t do that. You’re trying to take all the chance out of it. It’s a fight. You’ve got to have that [uncertainty] where you’re in there swinging. Move a little bit, but at least let’s keep fighting.”

To Guida’s credit, his movement did yield some effective offense in the early going, as the Jackson’s MMA representative cracked his foe with straight punches that opened a cut on the bridge of Maynard’s nose. However, as the bout wore on, Guida’s production diminished. Though Maynard’s frustrations grew as contest progressed, he managed to land more consistently in the bout’s final two frames, while Guida was warned for passivity by referee Dan Miragliotta with just 90 seconds left in the fight.

“I was trying to go for him. Obviously there were a couple of sprints here and there. Good thing I hired a sprint coach. He was all over the place. I was just trying to stalk him down and keep cool. I was getting flustered, of course, but I thought it was going to be a brawl,” said Maynard. “If [the referee] could have [taken a point for passivity], then that would have been nice for me, but I’m not trying to tell people how to do jobs. I’m just trying to do my job, and that’s to fight, you know?”

The decision appeared up for grabs as the bout came to a close, but Maynard’s hand was eventually raised in a split verdict from the judges. Though his method of victory did not come to pass as he had envisioned, “The Bully” said that there are still positives to take away from the win as he now tries to reenter the lightweight title picture.

“[I’ve had] a new camp, a new home, a new everything [since joining American Kickboxing Academy]. I was hungry for this fight, and I’m hungry for the belt,” said Guida. “I love this sport, and I’m pumped to get back in the mix. [A fourth Frankie] Edgar fight is always good, but the whole goal is the belt and the top of the world.”