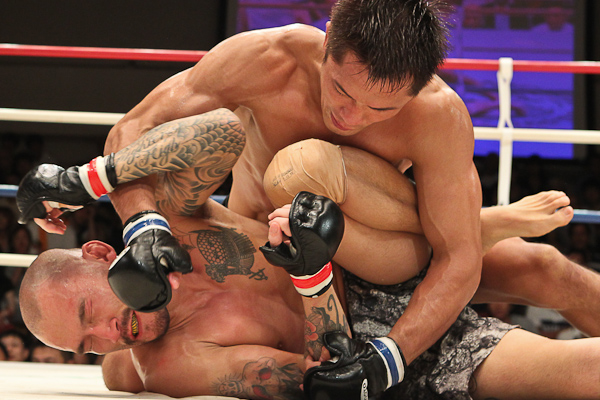 The first period saw Hironaka immediately gunning for a takedown, which he scored with relative ease. Boku attempted to pull Hironaka down to minimize the striking distance between them, but Hironaka’s core proved too strong, allowing him to break his opponent’s grip and sit upright. As such, the Master Japan representative was able to rain blistering punches fully postured up, aiming both for the face and belly of Boku. The Krazy Bee product’s only offense in the first round came in the form of an illegal upkick, for which Boku was docked a point.

Though Boku started well in the second and third stanzas, teeing off with stiff jabs and cracking right hands to his opponent’s face, Hironaka had already set the pattern by which he would dominate Boku and take the remaining rounds.

“I approached this fight like my [Takashi] Nakakura fight. I didn’t want to trade with him, so if I got hot, I’d go for the takedown,” explained Hironaka of his strategy. “I took the first and second rounds. If I caught hold of him, I was sure I could take him down.”

An otherwise helpless Boku freed himself in the final minute of the third round, whereupon he breathlessly pursued Hironaka with winging punches, aiming to turn things around and finish the fight. The knockout did not come before the bell however, as a tired but calm Hironaka retreated until the time limit. Judges Tadashi Yokoyama, Hiroyuki Kanno and Toshiharu Suzuki unanimously scored the bout 30-26 for Hironaka.

“This win is my happiest. It took me 10 years to achieve this. I’ve had many hardships in my career, but it all paid off in the end,” said a tearful Hironaka of the championship win. 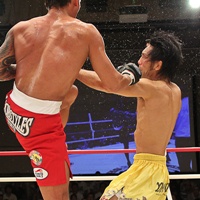 T. Irei
Urushitani (red trunks) smashed Shojo.
In the co-main event, 123-pound world champion Yasuhiro Urushitani punctuated his first title defense with a crushing knockout of challenger Yuki Shojo. Having lived for the past two years under the specter of a third-round guillotine loss to Shojo in a fight Urushitani had dominated, the champion entered into their second bout with a vengeance.

“The difference [from our 2008 fight] was that I wasn’t motivated last time,” admitted Urushitani to Sherdog.com after the bout. “At the time, I didn’t get a title shot, so I lost motivation to fight. This time though, I had the title, so my motivation was high.”

Urushitani employed slick counter-boxing to circle away and plunk his challenger with repeated southpaw lefts, once dropping Shojo to a knee. Not one to take his beating lying down, Shojo tenaciously pushed forward with flurries, looking to make the fight ugly with knees in the clinch and dirty boxing. The repeated left hands had a purpose, according to the champ, who claimed, “I noticed he always dropped his guard to defend against my left straight, so I set him up with it to connect with the high kick.”

Doing exactly that, Urushitani ushered in the end with a thunderous high kick to the face early in the second frame, sending a prone Shojo to the mat. Following with punches, Urushitani was pried off by referee Suzuki just 24 seconds in.

While there may be another challenger for Urushitani’s title in the near future, the champion also expressed a desire to step into the Octagon soon, given the imminent opening of a 125-pound division in the UFC.

“I’m definitely interested in the UFC. I want to go there,” said the top-ranked flyweight with a grin. “I’d love to fight the guy who beat [Norifumi] ‘Kid’ Yamamoto. I think I can stop [Demetrious Johnson’s] takedowns. I think I match up well with him.”

Rather than putting forth the high-octane grappling showcase that most fans expected, Shooto charisma Rumina Sato and former 132-pound champion Masakatsu Ueda decided to strike it out in their highly anticipated bout. However, the result of the duel of Shooto greats was no less entertaining or definitive. 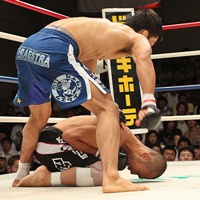 T. Irei
Ueda (blue trunks) took out Sato.
Sato landed hard right hands and a Superman punch that tripped up the former champ, but Ueda returned with stiff southpaw jabs, bloodying Sato’s nose. It was Ueda’s kicks to the body which proved the deciding factor, though: At the 4:23 mark, an Ueda kick to the liver doubled-over a cringing Sato. Ueda lunged for the finish just as referee Suzuki dove for the save.

Given WEC veteran and former Shooto 143-pound champion Akitoshi Tamura’s penchant for holding opponents in his rubber guard to rack up small punches, it looked like fans were in store for three largely uneventful rounds. Tetsu “Hadairo” Suzuki came to the rescue, however, reversing an omaplata sweep attempt by Tamura in the third stanza of their bout to lock on a horizontal triangle choke and kimura. A confused referee Suzuki debated which submission to call the catch for, but soon found himself pulling Hadairo off the nearly unconscious Tamura after a tap at the 2:45 mark.

The crackling 132-pound bout between 2010 Shooto rookie tournament MVP Kyoji Horiguchi and big-time banger Yuta Nezu delivered for all the 3:17 it lasted. The opening minute saw Nezu tenderizing Horiguchi’s legs with low kicks until a fed up Horiguchi began lunging with brutal hooks. Most of the punches connected, with two sending Nezu to the canvas. Though Horiguchi pursued with vicious ground and pound, Nezu showed great resilience, popping back to his feet to continue banging it out. However, it was only a matter of time until a Horiguchi hook to the jaw did Nezu in for good. The kill-shot sent a stiff Nezu through the ropes and out of the ring on a stretcher many minutes later.

Despite his Kiguchi Dojo pedigree and the 2008 rookie tournament championship at 154 pounds, wrestling stalwart Ikuo Usuda shot himself into a third-round rear naked choke, courtesy of Wataru Miki. This came after two periods of effective Usuda striking, wherein he landed stiff left straights and crosses to Miki’s face. Miki slowly turned the tide, first working Usuda over with his own southpaw jab in the second frame, and then reversing Usuda’s opening takedown attempt in the third. Once on the wrestler’s back, Miki sunk the choke for the tap at 2:20.

Yuta “Uruka” Sasaki scraped by Kosuke Kindaichi, though the Shooto 2010 rookie champ at 143 pounds spent most of his time trapped in the clinch, rather than working on the ground. A brief moment atop Kindaichi in the second round seemingly tipped the scales in Sasaki’s favor for judges Kanno and Yokoyama, who awarded Sasaki the bout 20-19, while ref Suzuki deemed it a 19-19 draw.

Elsewhere, Masato Sannai got Teruyuki Matsumoto out of the ring in under a minute, knocking his block off with a decapitating right hook. The punch sent Matsumoto to all fours, at which point Sannai dropped to finish with further punches. Referee Suzuki stepped in for the save at the 0:38 mark.

Jun Nakamura submitted Jun Nabeshima to advance in the 115-pound bracket of Shooto’s 2011 rookie tournament, putting the in-ring comedian away with an armbar at the 3:00 mark in the second round. Nabeshima started the fight literally running away in his corner of the ring, forcing Nakamura to engage with takedowns.

In a pair of 143-pound rookie tourney bouts, Yoshifumi Nakamura forced Shoki Omichi to submit to an arm-triangle choke at 1:59 of the second frame, while Satoshi Inaba took a majority decision over Ikuya Sasaki with scores of 20-19 (twice) and 19-19.